"Shame on you! Shahid Afridi hates everything about our country"

Shahid has appealed for donations in order to help people affected by the deadly virus in Pakistan.

Yuvraj took to Twitter where he shared a video message, calling for citizens to back the fund.

He wrote: “These are testing times, it’s time to look out for each other especially the ones who are lesser fortunate.

“Let’s do our bit, I am supporting Shahid Afridi in this noble initiative of COVID-19.”

These are testing times, it’s time to lookout for each other specially the ones who are lesser fortunate. Lets do our bit, I am supporting @SAfridiOfficial & @SAFoundationN in this noble initiative of covid19. Pls donate on https://t.co/yHtpolQbMx #StayHome @harbhajan_singh pic.twitter.com/HfKPABZ6Wh

While it was good of Yuvraj to lend his support, and it was acknowledged by Shahid and other cricketers, social media users did not feel the same way about his decision.

Netizens were angered at Yuvraj’s support for a rival player who has heavily criticised the political tensions between India and Pakistan.

One person wrote: “Yuvi come on u r better than this. Choose your friends wisely.”

Another user posted: “Shame on you! Shahid Afridi hates everything about our country and our culture.

“You decide to donate to his foundation instead of the Indian Prime Minister’s. You make me sick.”

Indian politician Vikas Pandey wrote: “Not done! He runs propaganda against India and is one of the most hateful Pakistani celeb and you are supporting him.”

The criticism led to Yuvraj releasing a response to the online trolls.

Another cricketer who lent his support for Shahid’s COVID-19 fund was Harbhajan Singh.

In a video message, Harbhajan praised the ongoing work and called on other cricketers to make similar appeals.

The off-spinner spoke about the success of the foundation, which is delivering essential items to the poor.

He went on to ask Wasim Akram and Shoaib Akhtar to spread awareness regarding the initiative. Harbhajan also encouraged fans to make a contribution to the foundation during the ongoing pandemic.

However, he ended up being subjected to trolling.

One person said they had “lost respect” for Harbhajan while another posted:

“Horrible. Cricketers are overrated in India.”

Shahid then posted a message, responding to the messages directed at Yuvraj and Harbhajan. 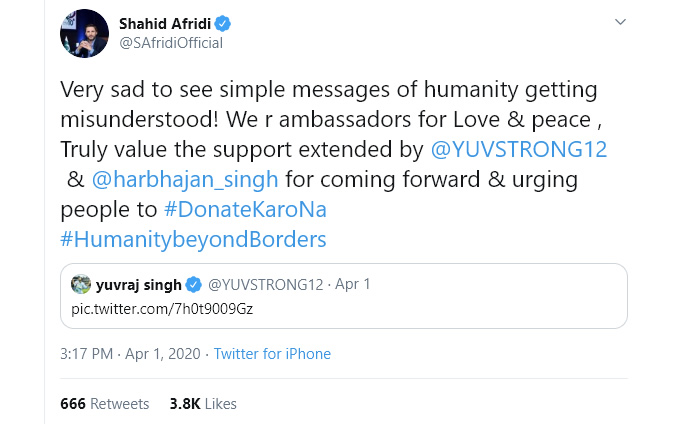 The trolling comes amid tensions between the two countries over Kashmir. As a result of the ongoing dispute, India and Pakistan have not played a bilateral cricket series since 2012-2013.

India is currently under lockdown and it has had over 2,300 confirmed cases and 56 deaths.

Meanwhile, Pakistan has had more than 2,400 cases with 35 fatalities.

Dhiren is a journalism graduate with a passion for gaming, watching films and sports. He also enjoys cooking from time to time. His motto is to “Live life one day at a time.”
Ziyad Rahim: The COVID-19 World of Z Adventures
Wasim Akram & wife Shaniera share Their Quarantine Fun