Actor Pierce Brosnan faces a new controversy over his 2016 appearance on paan masala adverts for Pan Bahar. He could end up paying a fine or a 2-year jail term after the Indian Health Department issued him a show-cause notice.

"If he fails to respond to the notice, he would face punishment of a fine up to Rs 5,000 or two years in prison."

Actor Pierce Brosnan has landed in hot water with the Indian government. He could face paying a fine for his appearance in paan masala adverts.

The star, well-known for playing James Bond in films such as Goldeneye, has been threatened with a fine costing Rs 5,000 (approx. £56). But if he fails to pay the amount, he could reportedly face two years in jail.

Whilst some paan masala doesn’t contain tobacco, they can contain a nut called supari. The World Health Organisation (WHO) considers supari to be a cancer-causing agent, leading to many Indian states banning it.

On 12th February 2018, India’s Health Department issued a show-cause notice against the celebrity. They demanded an explanation for his appearance and why he agreed to promote the product.

“We have issued the notice to Pierce Brosnan through the company, and also reached out to him via social media platforms. If he fails to respond to the notice, he would face punishment of a fine up to Rs 5,000 or two years in prison.” 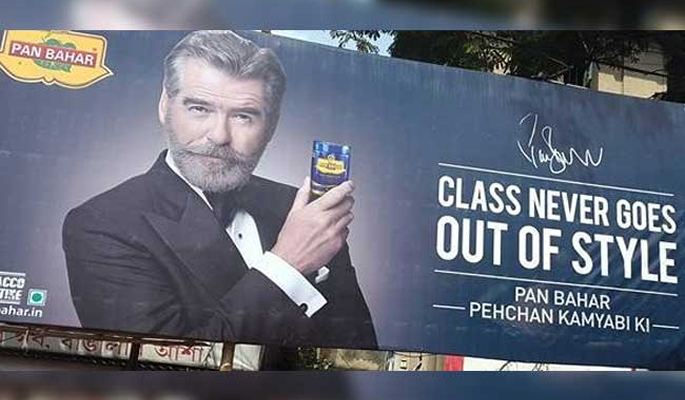 However, it seems unclear how the jail sentence will become enforced if he fails to reply to officials. While he has not yet commented on the notice, Pierce did previously express his regret for appearing in the adverts.

Pan Bahar’s campaign was suspended in October 2016, due to its controversial ingredients. Shortly after, Pierce released an official statement to People, revealing he felt his image was “grossly manipulated” to promote a harmful product.

Having lost his wife to ovarian cancer in 1991, he said:

“Having endured, in my own personal life, the loss of my first wife and daughter as well as numerous friends to cancer, I am fully committed to supporting women’s healthcare and research programmes that improve human health and alleviate suffering.”

He also claimed his contract details only stated he would advertise “breath freshener/tooth whitener” which would be “all-natural containing neither tobacco, supari, nor any other harmful ingredient”.

The company behind Pan Bahar, named Ashok and Co, denied misleading the actor. They added they emphasise the product as a ‘mouth freshener’, which is not associated with chewing tobacco.

Whilst paan masala is banned in some parts of India, states also prohibit the use and selling of gutka. This is a chewing tobacco, also known to be very addictive and carcinogenic.

Both these types of products can increase the risk of throat and mouth cancers. It’s consumed and spat out in bright red streams by millions of people who are addicted to it, creating mildly psychotropic effects to the individual.

As the Indian Health Department sends out their notice, it now seems to depend on whether Pierce makes a response. Or if the department will attempt to enforce a fine or jail term.