Spiritual leader Baba Ram Rahim Singh has been jailed for 20 years for raping two female followers. He raped them in his headquarters, back in 2002.

He would allegedly justify these crimes as an act of pardon, removing the womens' sins.

The spiritual leader of Dera Sacha Sauda, Baba Ram Rahim Singh, received a jail sentence of 10 years for raping two of his followers in 2002.

The sentencing took place on 28th August 2017, in a Panchkula court, located in the state of Haryana. The guru has previously been convicted of rape on 25th August.

Baba Ram Rahim Singh denied the charges of rape against the followers, both women. They claimed that he raped them in the headquarters of his spiritual group.

Originally, the sentence was 10 years for one case but in actual fact,  Baba Ram Rahim Singh will spend 20 years in prison according to the overall sentencing.

The judge stated that a sentence of 10 years and a fine of Rs.15 lakh will be imposed on the rapist for two cases and he is to pay RS.14 lakh to the two victims.

The incidents allegedly took place in 2002. In that same year, an anonymous letter was delivered to the then-Prime Minister, Atal Bihari Vajpayee. It accused the Indian guru of repeatedly raping his female followers.

The Central Bureau of Investigations launched an investigation into the letter. In 2007, two women came forward, claiming to have been raped by Baba Ram Rahim Singh. The following year witnessed the case finally coming to trial.

Baba Ram Rahim Singh described his headquarters, based in Sirsa, as a ‘gufa‘. A place which served for meditation. However, with reportedly over 200 women living in the headquarters, some of them have spoken out on what took place there.

Known as ‘sadhvis‘ (meaning followers), some had once been victims of sexual assault. Reports claim that the Indian guru would handpick certain female followers and rape them. However, he would allegedly justify these crimes as an act of pardon, removing the women’s sins.

One of the women involved in the trial suffered from this and wrote the 2002 letter. She explained how many sadhvis had become “prostitutes” to Baba Ram Rahim Singh.

Here is the full anonymous letter:

Subject: Request for probe into rape of hundreds of girls by Dera chief (Ram Rahim)

I am a girl hailing from Punjab and I have been serving as a sadhvi at Dera Sacha Sauda, Sirsa (Haryana) for the last five years. There are hundreds of other girls, who serve for 16-18 hours a day at the Dera. We are being physically exploited here. Dera Maharaj Gurmeet Singh rapes girls at the Dera.

I am a graduate girl. My family members are blind followers of Maharaj (Gurmeet Ram Rahim Singh). I became a sadhvi at my family’s bidding.

Two years after I became a sadhvi, Maharaj Gurmeet Singh’s close woman-disciple Gurjot told me one night around 10 pm that I had been summoned to ‘Gufa’ (residence of Gurmeet Ram Rahim). As I was going there for the first time, I was elated that God himself had sent out for me.

When I went upstairs, I saw Maharaj sitting on the bed holding a remote control in hand and watching a blue film on TV. Beside his pillow on the bed, lay a revolver. Seeing all this, I was stunned, felt dizziness, and felt as if the earth has moved from beneath my feet. I wondered what at all was happening here.

I had never imagined that Maharaj would be such a person. Maharaj switched off the TV and seated me beside him. He offered me water and said that he had called me because he considered me very dear to him. This was my first day (experience).

Maharaj took me in his arms and said that he loved me from the core of his heart. He also said that he wanted to make love with me. He told me that at the time of becoming his disciple, I had dedicated my wealth, body and soul to him and he had accepted my offering. By this logic, your body is mine now.

When I objected he said, “There is no doubt that I am God.” When I asked if God also indulges in such acts, he shot back:

1. Sri Krishna too was God and he had 360 gopis (milkmaids) with whom he staged Prem Lila (love drama). Even then people regarded him as God. This is not a new thing.

2. I can kill you with this revolver and cremate you here. The members of your family are my devoted followers and they have such blind faith in me that they are my slaves. You know it very well that your family members cannot go against me.

3. I have considerable influence in the governments. The chief ministers of Punjab and Haryana, and central Ministers touch my feet. Politicians seek my support and take money from me. They cannot take any action against me.

We will get your family members dismissed from government jobs. I will get them killed and wouldn’t leave any evidence behind. You know it very well that I had got Dera manager Fakir Chand killed earlier. No one knows anything about him till date. Neither there is any evidence of the murder. By money power, I can buy politicians, police and justice.

Thus, he raped me. For the past three months, my turn comes every 25-30 days. Now, I realise that he has been raping other girls staying with him.

Around 35-40 women living at the Dera are over 35-40 years old and past the marriageable age. They have compromised with their lives at the Dera. Most of the girls are educated and have secured BA, MA, BEd degrees.

But they are living a life of hell at the Dera because their family members are fanatic followers. We wear white clothes, cover heads with scarf, forbidden to look at men and keep a distance of 5-10 feet from men as per Maharaj’s commands.

We appear like devis (pious women), but our situation is that of prostitutes. I tried once to tell my family members that all was not well at the Dera.

But, they got angry with me saying that if God’s company is not worth enjoying then which place would be. It seems your mind has become corrupt, recite the name of satguru (the real teacher), they told me.  I am helpless. I have to obey every command of the Maharaj.

Just a few days ago, a Bathinda girl spoke about the wrongdoings of the Maharaj, she was thrashed by women-disciples. She is still bed-ridden at her home due to this assault. Her father has left his service as a sevadar (servant of Dera). She is not telling anyone anything for the fear of Maharaj.

Similarly, a girl from Kurukshetra district has also left the Dera and went back home. When she narrated her sufferings at the Dera to her family, her brother who worked as a sevadar, gave up his job.

When a Sangrur girl left the Dera, went home and narrated the wrongdoings at the Dera to the people, the Dera’s armed sewadar hooligans visited the girl’s home and threatened to kill her. They warned her not to tell anyone anything about the Dera.

Similarly, girls from Mansa, Ferozepur, Patiala and Ludhiana districts (of Punjab) have gone back home and are keeping mum as they have threat to their lives. Same is the fate of girls from Sirsa, Hissar, Fatehabad, Hanumangarh and Meerut who are not uttering a word due to muscle power of the Dera goondas.

If I reveal my name (and) my address, my family and I will be killed. I can’t keep quiet and I also don’t want to die, but I want to expose the reality (of Dera). If a probe is conducted by the press or some government agency, 40 to 45 girls – living in utmost fear at the Dera -, if they are convinced, are willing to tell the truth.

Our medical examination should be conducted so that our guardians and the people would know whether we are still celibate disciples or not.

If we are no longer virgins, it should be probed as to who violated our chastity. The truth will then come out that Maharaj Gurmeet Ram Rahim Singh of Sacha Sauda has ruined our lives. 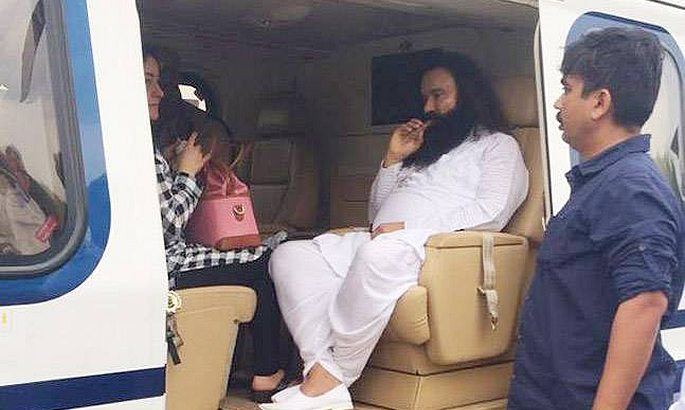 After the Indian guru became convicted on 25th August, massive waves of violence broke out as his followers protested against the verdict.

Sadly, many lost their lives, with the death toll reaching 38 and over 200 were injured.

On 28th August, the Government placed special measures upon Haryana and Punjab prior to the sentence. Police also stepped up security, with places such as schools and colleges closed.

With the sentence now revealed, this will hopefully serve as justice to his victims. However, some previously hoped for a tougher sentence, even a life term imprisonment.

The spiritual leader’s legal team have also revealed they will appeal against the verdict. It seems then this case is far from over.

But it sends a strong signal out to these kinds of so called ‘baba’s’ or religious leaders that claim to be something they are definitely not.

Images courtesy of The Hindustan Times.

When do you Fall in Love in an Arranged Marriage?
Head of International Drug Syndicate called Sultan arrested in UK