Superhuman adventure runner Ziyad Rahim from Pakistan can be best described as a man of steel. Whilst running for charity, the Qatar based banker has broken six Guinness World Records in marathons and ultra marathons.

"It was like wearing steel boots and running on a bed of magnet."

After earning the Guinness World Record for the fastest time to run a marathon on each continent and the North Pole in 2013, Ziyad added a further five world records in 2014.

On 8 March 2014, marvellous Ziyad completed his record-breaking challenge of running 7 ultra marathons on all seven continents in 41 days. The previous record was 267 days, set in 1999 by Dr. Brent Weigner from the USA.

Having accomplished this challenge, Ziyad set 4 new world records including fastest time to complete a marathon and ultra marathon on each continent. 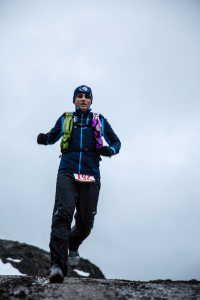 As part of his record-breaking campaign, Ziyad was running in aid of the Pakistan Welfare Forum (Qatar) and the Maria Cristina Foundation, a not for profit organisation located in Dubai. This challenge of running 7 ultra marathons on each continent was all about commitment, staying motivated, digging deep, focusing on how he was going to succeed and how he could push beyond his comfort zones. Rahim’s preparation and training started around six months prior to the challenge. Ziyad had a good experience base having broken the Marathon Grand Slam record in 2013. Previous to this in 2012, Rahim completed the 250 km Marathon Des Sables, the toughest foot race in the world. But running seven 50k ultra marathons around the world in 41 days was by far his biggest challenge yet.

His challenge began in Antarctica on 26 January 2014 where he ran the White Continent Marathon at King Gorge Island. Running in temperatures below-10 degrees, Ziyad finished the race quite comfortably.

Rahim then boarded a plane for ultra marathon two in Chile. After visiting the Penguin Colonies and Torres Del Paine National Park, Ziyad completed the South American leg of his challenge by running in the Punta Arenas Marathon on 30 January 2014. 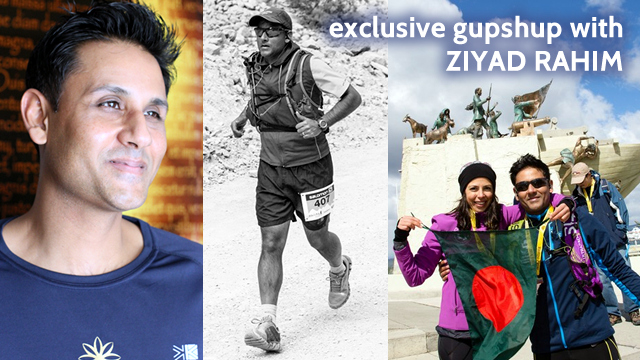 Ziyad found the Punta Arenas race relatively testing as compared to 2013. According to Rahim “running on cement pavement” was “quite hard on the joints.” He also had to deal with tempestuous conditions coming from the Southern Ocean.

Having spent a few days back at his residence in Doha – Qatar, Ziyad remained in Asia as he took a flight to Dubai for the third leg – Wadi Bih Solo Canyon (ultra marathon). 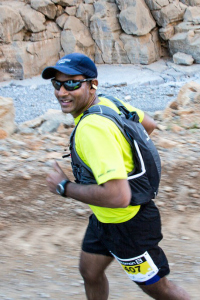 With the sun blazing throughout, Ziyad finished another perilous uphill race set in the mountain range of Hajar between UAE and Oman. Rahim completed continent three on 07 February 2014.

Ziyad who works as a full-time banker returned briefly back to Doha, catching up on all the year-end closing, before heading off to Europe for continent four.

The Moonlight Challenge in Kent, UK was the destination of his next race. Prior to the race on 15 February 2014, UK was going through the worst flooding in history.

Two days before the event, whilst making all the runners aware of the course, race director, Mike Inkster sent an email saying:

“The course – one third is wet and muddy and, in places, resembles the ‘Somme’ on a bad day. However, there are two particularly bad patches of about four hundred metres where it is both very muddy and has some calf-deep puddles. If you can’t swim, bring arm-bands.”

“It was like wearing steel boots and running on a bed of magnet.” 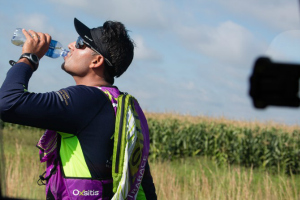 Ziyad added that during the run and when in need for inspiration, he suddenly recalled the famous quote of TS Elliot: “Only those who will risk going too far can possibly find out how far one can go.”

Highlights of continent five and his penultimate race included: running 125 times around a 400 metre track to complete the Coburg ultra marathon in Australia (23 February 2014) and taking part in a looped course to finish the Caumsett State Park ultra marathon, ticking off continent six (02 March 2014).

Rahim made his seventh and final stop at the inaugural Louis Massyn Ultra Marathon, which took place in Free State, South Africa on 08 March 2014.

As Ziyad crossed the finishing line, he completed his epic and heroic challenge 41 days, 3 hours after he started.

Even though he encountered painful moments, Ziyad achieved glory by keeping himself fit. Feeling an enormous sense of achievement, a jubilant Rahim spoke exclusively to DESIblitz saying:

“It was a great feeling and I was so glad that I completed the challenge amongst the most hospitable people in the world.”

Rahim rounded off the year in grand style. In December 2014, he recorded his sixth Guinness World Record upon completion of 14 ultra marathons (700 km) in consecutive days. Ziyad achieved this feat in Long Beach, California as part of the Charlie Alewine winter challenge.

Ziyad told DESIblitz this record breaking journey would not have been possible without the support of his wife Nadia and two children Zara and Mekaal.

Rahim has proven if you put your heart and soul into something, one can fulfil their dreams and goals in life. It is all about being determined and persistent.

Always focusing on the end result, Ziyad has successfully undergone a mind blowing voyage around the world to attain a graceful victory overall.

In 2015, Ziyad is hoping to embark on, perhaps the biggest challenge of his life. He is aiming to complete 7 marathons on 7 continents in only 7 days.

This challenge, dubbed the “Triple 7 Quest” is Rahim’s brainchild. Ziyad Rahim is taking thirty-six runners from all over the world on this exciting adventure.