Dad witnesses Thief steal his Mercedes with 3 Children Inside

A father from Bolton watched in horror as a thief drove off in his Mercedes while his three young children were sitting inside.

"I turned around and saw the car driving away"

A father recalled the terrifying moment a thief sped off in his Mercedes while his three young children were sitting in the back.

Zahid Nazir, from Bolton, was driving home from a wedding on July 27, 2021, with his three children when he got out of his car for a quick break.

At around 2:45 am, he got out of his Mercedes “for seconds” to talk to his wife Sabahat who was in another vehicle.

The couple’s three children were in the back of his car.

But during this time, a man crept around a corner and entered the driver’s seat without the couple knowing.

Before realising the three children were still inside, the thief sped away.

Meanwhile, Zahid tried to catch up and stop the car from fleeing.

CCTV footage showed Zahid sprinting down the road before losing his balance and falling over.

He quickly got into his wife’s car in a bid to follow the thief.

During the pursuit, the couple drove past a police officer and hailed him over to help with the search.

Zahid later realised his wife’s phone was still inside the stolen car and he used the ‘Find My iPhone’ app to help trace the device and his children.

Around 20 minutes later, police tracked the children down with the car abandoned on a quiet country road.

Zahid said: “I couldn’t believe it when I turned around and saw the car driving away – I was in total shock.

“I barely had time to think when I just ran off after the car, I knew I had to try and stop whoever was taking my children away.

“After that, I felt very panicked and worried about what had happened, I didn’t understand what was going on.

“Eventually I was reunited with them, which was a really emotional moment. I was so happy they were okay.” 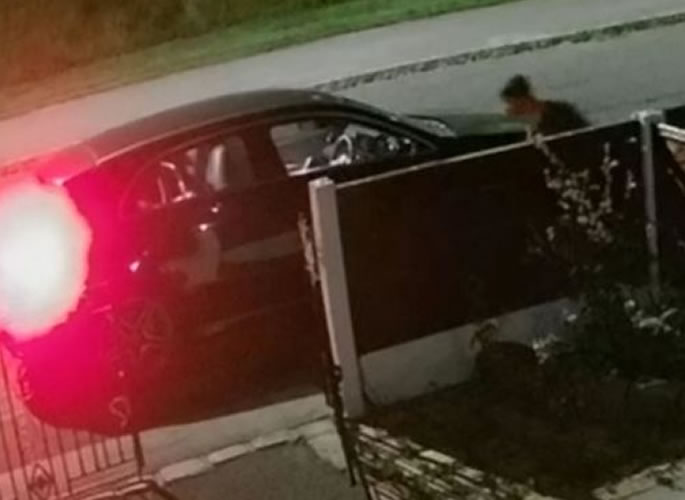 The children were unharmed but since the incident, they have been struggling to sleep due to fear of intruders.

“We spent a few nights at someone else’s house because it was too scary to stay here.”

“I’ve even thought about selling the house and the car to try and keep everyone safe, it’s a horrible situation to be in.”

Despite the fears, Zahid believes the thief did not know the children were inside the car and that is why the car was abandoned.

Zahid continued: “When I saw my kids I just started crying. I didn’t even run to them to begin with, I just cried.

“I felt so happy and relieved that they were with me again and had not been hurt.”

Zahid says officers described the theft as “opportunistic” but he believes otherwise.

He said: “You can see in the video that the person who did this was very sneaky. I think the whole thing was planned.

“That’s the time I get home from work every night and I think they knew that, even though on that night I had been at a wedding.”

“On July 27 police were called to a report of an attempted car theft.

“Enquiries have established a man entered and drove off with the vehicle after it was stationary by the side of the road.

“The car was also occupied by three children who remained inside throughout. The car was driven off and abandoned shortly after.

“Upon police arrival, the children present in the vehicle were returned safely to their parents. There were no injuries.”

No arrests have been made but police say enquiries are ongoing.

Dhiren is a journalism graduate with a passion for gaming, watching films and sports. He also enjoys cooking from time to time. His motto is to “Live life one day at a time.”
Sikh Man Handcuffed by Police at Funfair over Kirpan
Indian Farmer murders Brother over Agricultural Rivalry