British Asian boxer Amir Khan faced the veteran boxer Zab Judah in the ring to win the IBF junior welterweight title. The fight full of speed and punches galore elevated Amir Khan to the next level of his boxing journey as the winner of this exciting bout.

"I want to be the best fighter in the world"

In a boxing clash between the boxers from two generations, Amir Khan was the victor of the bout between him and Zab Judah at the Mandalay Bay Resort & Casino in Las Vegas, USA, on Saturday 23rd July 2011.

Interestingly, Amir Khan was only 9 years old when Zab Judah began his boxing career in 1996 and here he was fighting this older boxer in the ring for the IBF junior welterweight title in front of a huge and jubilant Las Vegas crowd. The atmosphere was very upbeat and everyone was ready to see what the British boxer Khan was made of against a known opponent in the States. 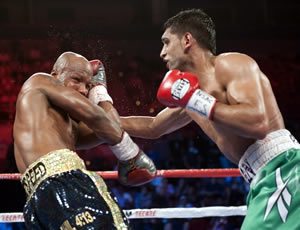 It was a truly masterful display from Khan who knew Judah was viewed as dangerous opponent capable of causing an upset. However, Khan outboxed Judah and used his agility, strength and no doubt age as an advantage.

Amir’s hand speed and flash punches fazed Judhah. Khan’s intent was to put on a show of a dominating performance. Judah’s straight left which is deemed as his most dangerous, was hardly seen by Khan because of his quick movement.

Khan brutalised the veteran before knocking the wind out of him with an uppercut punch to Zab’s body. The blow finished the fight knocking Judah to the floor, but there was debate as to whether Khan’s strike had landed below the waistline. 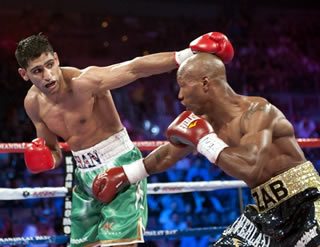 The statistics for the punches showed Khan landed 61 punches compared to Judah’s 20 and by the fifth round Amir had won each session on all the scorecards of the three judges.

As well as winning the IBF junior welterweight title from Judah, Khan protected his WBA super lightweight crown which he won from Andriy Kotelnyk two years ago.

“We took a game plan to the fight which was to keep away from Zab’s backhand because Zab is a powerful fighter and we didn’t want to get caught with that,” said Amir after the fight. “As soon as we took the backhand away from him the jabs were working well. As everyone knows my main asset is speed and power comes with that but this time we worked a lot on power,” added Khan, the winning fighter.

Not being over zealous about his win Khan fully complemented Judah as a very highly respected fighter and said, “Zab’s very awkward, at times I was missing him and he’s one of the quickest fighters I’ve faced. I still think he’s got a lot in the tank, he’ll still win a world title.” 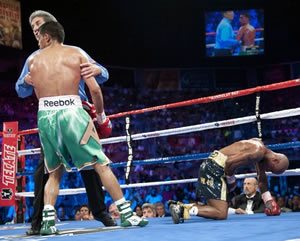 Khan went through some rigorous training and preparation for the fight for which he can thank his mentor and coach Freddie Roach. He knew he had to face what he called the the ‘tricky’ fighting strategies of his American opponent to win.

On the other hand there was some contention from Judah regarding the referee’s count in the fifth round against him. Judah felt the strike from Khan was a ‘low blow’ which is any punch that falls below the beltline. It is classed as an illegal hit and when it happens, the opponent has up to 5 minutes to get himself ready to fight again. This is at the discretion of the referee who makes the decision based on what he thinks is the severity of the blow.

Judah thought referee Drakulich’s count was to give him time to recover from the low blow and didn’t realise the count was to end the fight at 2’47”.

After the fight Judah said, “I don’t make any excuses but that was a low shot you know, believe it or not.” He added, “I went down and the referee was counting, I figured he was counting for a low blow – the eight count to get myself together. But when I heard him say – ‘nine, 10, it’s over’ I said, ‘what do you mean it’s over, it’s a low blow’.”

Khan rejected Zab’s claims for a low blow and said his punch was above the belt. Khan said, “It was nowhere near below [the belt]. It was a great shot.” He added:

“If it had gone a few more rounds, I would have knocked him out with a clean shot.” 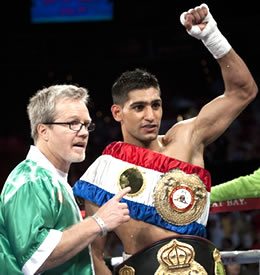 At the post match conference Khan said in praise of Judah, “We wanted to take Bradley on but Bradley didn’t want to fight and the fight fell through but at least Zab showed the balls and took the fight on.”

Khan’s next fight is pencilled to be at 147 pounds after December 2011 and will be in the UK against Sheffield fighter Kell Brook. Khan keen to continue and improve said, “My aim is to move up the pound-for-pound rankings and to one day be pound-for-pound champion. I want to be the best fighter in the world,” said Khan.

This triumphant win means now Amir is getting closer to his dream fight against Floyd Mayweather. It’s likely this will take place late next year. “The Mayweather fight is something I’m looking at the for the future and it would be huge for me. It would drive me on,” said Khan.

Not wanting to show he is afraid to take on challenges, Khan brimmed with confidence and said, “I’ll fight anyone and there are some big names out there for me. I’ll take a look at the short list.”

Amir Khan’s win against Zab Judah is another victory leading this British Asian boxer into the next chapter of his excelling boxing career. He has showed that with his hard work and determination, and support from his fine coach Freddie Roach, he is eager, ready and in great shape to take on the next challenge.