The popularity of Indian Football is being questioned. Sports like Cricket have a huge following but Football does not seem to ignite the same interest. So, why is the sport not being taken seriously in India and what’s hampering its progress?

Football is a struggling sport in South Asia

The national Indian football team comes in at 153 in world FIFA rankings. It is a disappointing low position and continues to drops points after a string of poor performances in the World cup qualifying stages. They suffered a gruelling first hand defeat to United Arab Emirates but did pull back a respectable 2-2 draw in the second game. Many Indians will not know this.

Football noticeably comes after cricket and hockey in India but regardless, has the capacity to generate masses of fans and enthusiasts. India’s answer to the Barclays Premier League, the I-League was formed in 2007. It was seen as a rival to challenge cricket for the title of India’s main sport but has had very little success in doing this, even though parts of the nation such as Goa and Kerala hold football in much higher regards than cricket. 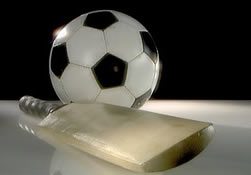 In 2008, India unveiled the Indian Premier League for cricket (IPL), contested by ten teams with players from around the world. Franchisees were snapped up by Bollywood stars eager to invest their rupees in the venture, if not to provide lucrative publicity. The IPL only seconds the NBA in terms of player wages, outstripping the controversial player wages in European football. So, if the cricket is able to generate such revenues, why is Indian football in financial turmoil? 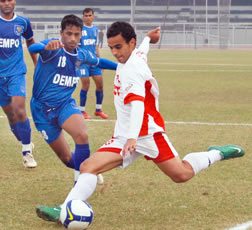 There is very little to suggest that there is no interest in football in India. The Saltlake stadium, with a seating capacity of 120,000 will play host to a friendly match between Venezuela and Argentina on September 2nd 2011. It may or may not feature the twice FIFA Ballon d’or winner Leo Messi but nevertheless, guarantees a vast turnout. Which raises the issues why are Indians more interesting in supporting overseas stars rather than local ones?

The lack of media coverage and interest in Indian football strikes a major blow to the success of the sport. There is no shortage of coverage for cricket in India, with most channels simultaneously airing the same match. Frustratingly there is either minimal or no coverage at all of football matches and fans are left short handed with no real chance of continuously following the sport or their team. 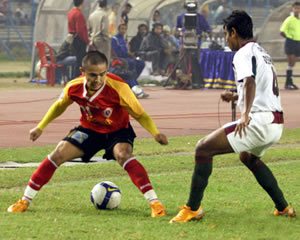 The Barclays Premier League took a very risky chance in 1992 to assign broadcasting rights to BSkyB, needless to say this risk was paid off. Television played a critical role in helping the success of football both on and off the pitch and helped satisfy the appetite of millions of football fans in the UK and abroad. The Barclays Premier League, rated number one by UEFA based on its success in European cup contests, has seen a rise in take over of clubs by foreign investors. 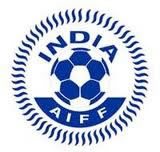 India’s All India Football Federation (AIFF) took a similar gamble in assigning broadcasting rights to Zee Sports in 2007 but their gamble did not pay off. The deal with AIFF was terminated just three years into the contract by ZEE Sports leaving all football matches with no television coverage at all. The financial problem the I-League has incurred because of a lack of a marketing plan is starting to look irreversible due a growing list of problems.

The Barclays Premier League has maximised their revenues using not only match day tickets but shirt sales and merchandise. The AIFF claim they are unable to generate revenue due to low attendance at matches but fans responded by saying the match timings are not suitable and a 4pm kick off is too early.

The I-League is doing the opposite of what the Barclays Premier League did to gain its coveted crown of the ‘most watched sports league’ in the world. The thirst for more live coverage of matches in England and the ever improving quality of football on the pitch has seen TV rights soar and gain the highest revenue of any football league in the world. On the contrary, the lack of media interest is not the only issue with Indian football.

Baichung Bhutia and Sunil Chetri hold impressive stats and player ratings for both club and country. 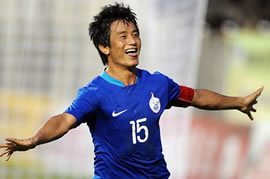 Bhutia labelled the ‘Indian Messi’ became the first Indian to play in Europe with Bury FC but after unsuccessful trials with other clubs including Aston Villa, he returned home to India. Chetri, who plays as a forward for Mohun Bagan AC, is known for his high work rate and ball control. He was the first Indian to play in America and also had an unsuccessful trial with a European team.

These two are perfect examples of the talent that the Indian footballers have the potential for but remain unknown because of a lack of awareness. Football is a struggling sport in South Asia desperately in need of more exposure. The current structure of football in India prevents the national team from taking part in much needed friendly games and the state leagues clash with the I-League, restricting the starting line ups. 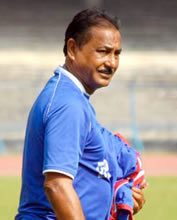 Stadiums and football academies, if established more readily, can improve the quality of players. Indian coach Armando Colaco recently claimed his national team are capable of playing with the same style of possession, close range passing and attacking as UEFA Champions League winners FC Barcelona. Famed for their training camp ‘La Masia’, Barcelona perfected the skills of world class players Xavi, Iniesta and Messi. It maybe a far cry but India can certainly works towards improving the quality of their play based on the La Liga giant’s philosophy.

Essentially India needs to nurture the I-League to turn around its current misfortunes rather than abandoning and creating another league. Focusing on the three main issues, investment, marketing strategy and branding and the I-League structure, the league can be organised to coincide with other FIFA leagues. Introducing an IPL style league to India will go the opposite way. Although it will see a big cash injection, the professional credibility of the game and league will be overshadowed with money-spinning and tabloid rumours. 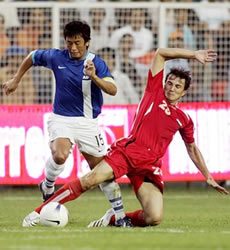 After the success of the IPL, it’s easy to believe investment can come from celebrities, in the long run however, the AIFF should be thinking in terms of adapting a similar business model to that of the Barclays Premier League. Passion for football does not always guarantee success, owners need to be prepared to manage and tackle financial difficulties, which is something still very present in England despite all its success. As Lord Alan Sugar, former Tottenham football club owner will tell you.

India is an emerging and economically viable country which can easily find the capital needed to fund more money into football. Venky’s Limited from India successfully completed the take over of Blackburn Rovers football club on 19 November 2010. Similarly investment can be sought from a collective of local businessmen and possibly the government.

Help can also be sought from FIFA regulated bodies to draw up a business case for the reform of the league but overall efforts lie in maintaining the public’s interests in home grown football and the need for it. What do you think is failing football in India?

Ruksana is a football fanatic. When not watching or talking about football, she loves reading books and meeting new people. Her motto is ‘It isn’t the mountains ahead to climb that wear you out; it’s the pebble in your shoe’ - Muhammad Ali.
Amir Khan wins Judah in fifth round
India revs up for first Formula One