In the FA Cup Fifth Round teams were fighting for a place in the quarter-finals for the World’s premier cup competition. DESIblitz presents a round-up of the action.

Football fans witnessed another riveting weekend of FA Cup action as teams battled it out for a place in the quarter-finals in this historic competition.

Out of the big boys, Liverpool, Aston Villa, Arsenal and Manchester United were all still in the mix.

DESIblitz reviews the action from the FA Cup Fifth Round.

The Eagles took the lead at Selhurst Park after 15 minutes, with a goal from Frazier Campbell.

Palace nearly doubled their lead at the end of the first half. But Dwight Gayle had a low shot blocked by Simon Mignolet. 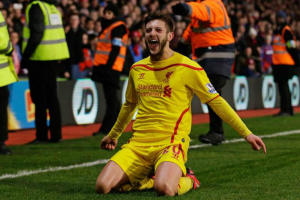 Liverpool changed their formation at half-time. Daniel Sturridge took confidence from the company of Balotelli up-front, and he netted an early equaliser for Liverpool in the second half. This was just the third goal of the season for Sturridge.

Later, a low free-kick taken by Balotelli hit the wall. The rebound was pounced upon by Adam Lallana, who put the ball in the back of the net in the 58th minute, giving the visitors their ticket to the quarter finals.

Brendan Rogers has faced criticism about Liverpool not living up to the expectations set last season. Winning some silverware would be the perfect way for him to answer his critics.

All eyes were on Aston Villa on Sunday as they faced their first match without recently dismissed manager, Paul Lambert. The new manager, Tim Sherwood, observed from the stands.

In a lacklustre first half, it was Leicester who seemed most likely to score. Marcin Wasilewski clipped the post with a header from a Matty James corner. James then forced Shay Given to fly into an exceptional save with a 25-yard left footer. 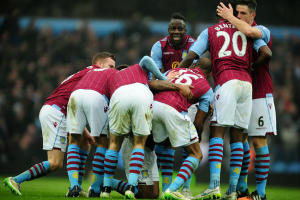 At half-time, Tim Sherwood was seen leaving the stands to give the team a pep talk. This seemed to have immediate effect as the team’s spirit lifted.

Both Benteke and Weimann hit the back of the net, but saw their efforts ruled-out for offside. However, Villa finally made one count through Leandro Bacuna’s curling shot.

Another goal from Sinclair in the 89th minute seemed to cement the Villa’s entry into the quarter finals.

A soaring header from Kramaric in injury time caught the home team off guard. It was a valiant effort from Leicester, but a little too late.

The win comes at a crucial stage in the season for Villa who are hoping to avoid relegation this summer. Perhaps this victory, paired with the presence of a new manager, will be enough to turn their fortune around.

The last match on Sunday saw Arsenal host Middlesbrough at the Emirates Stadium.

Middlesbrough, who knocked out Manchester City in the previous round, struggled for possession (only 32 percent) in the first half. Goalkeeper Tomas Mejias was busy from the start, doing well to keep out Santi Cazorla’s free-kick in the 6th minute. 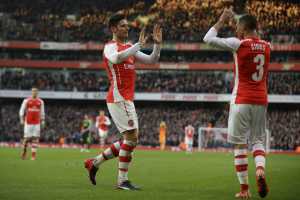 The Gunners got an early goal though from close range when the left foot of Giroud connected with a Gibbs cross. Two minutes later Giroud was successful again with a goal from a Cazorla corner.

Middlesbrough did try to fight back but a 20-yard effort from Albert Adomah was put just wide. Also Spanish forward Kike hit the post with a close-range header.

Theo Walcott should have added a third goal to the score sheet with two minutes to go after a pass from Tomas Rosicky, but Mejias parried it wide.

Arsenal have looked like a formidable side of late. The FA Cup Holders progress to the last eight as they gather momentum towards the end of the season.

The final match of the fifth round saw Manchester United head to Deepdale for the first time in 43 years.

Both teams started slowly with no real attempts on goal early on. In first-half injury time Gallagher kicked a shot straight at De Gea from 20 yards. But it was snapped up and the first half ended with no goals. 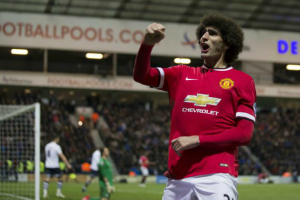 Preston shot off the mark after half-time. Scott Laird took an early shot inside the penalty area. It took a slight deflection, confused the keeper, and trickled into the bottom-right corner.

The goal provided United with a call to action. A scramble in the Preston defence saw Herrera level the match, 1-1, in the 64th minute.

In the 72nd minute a cross from Valencia found the head of Fellaini who knocked the ball towards the goal. It came back to him only to be kicked to the back of the net.

Towards the end of the match as United were awarded a penalty. Rooney blasted it home.

A few last minute attempts on goal for Preston passed by unsuccessfully. The match ended 3-1 with Manchester United walking into the quarter-finals.

The weekend witnessed a notable victory for West Brom who thrashed West Ham 4-0, through goals from Saido Berahino, James Morrison, and a brace from Brown Ideye.

Here are the other results from the FA Cup Fifth Round:
Derby 1-2 Reading
Blackburn 4-1 Stoke
Bradford 2-0 Sunderland

The Quarter-Finals, which will take place on the weekend of the 7th – 8th March 2015, look like an exciting prospect.

In a titanic clash of old FA Cup foes, Manchester United and Arsenal will go head-to-head at Old Trafford. Liverpool will host Championship side Blackburn, who have already knocked out Swansea and Stoke.