An all-round display from Mohammad Nawaz and his ream saw Pakistan beat India in a Super 4 Asia Cup 2022 T20I nail-biter. We roundup.

"My mind was clear that I'd hit out at every ball in my zone."

Mohammad Nawaz was the difference for Pakistan as they defeated India by five wickets in the Super 4 tense encounter at the Asia Cup 2022.

India managed to make 181-7 in their allotted twenty overs. In reply, Pakistan made 182-5, with one ball to spare.

Nawaz was fabulous with the bat, in the field and when he came to bat as a trump card. Pakistani players also chipped in as one unit, with Shadab Khan, Mohammad Rizwan, and Asif Ali making an impact.

Pakistan’s victory came on the back of some indifferent batting and bowling from India.

In one of India’s greatest rivalries, India took on Pakistan for round two. The first round went to the wire, ending as a close affair with India winning.

Fans in blue and green came in to watch this high-octane battle, with the two sides, playing their first Super 4 match. 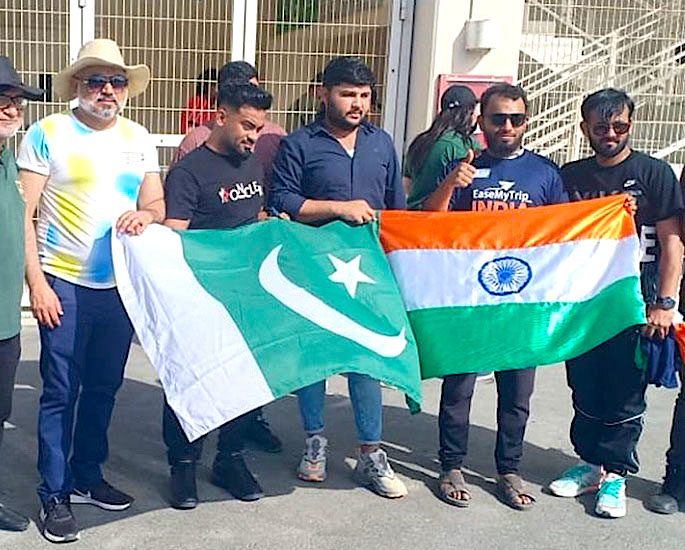 Pakistan won the toss for the blockbuster and decided to field first. Pakistan made one change, bringing in Mohammad Hasnain for Shahnawaz Dahani, who was out with a side strain.

From India’s last match, they made three changes, with Deepak Hooda, Hardik Pandya and Ravi Bishnoi coming in.

Dinesh Karthik, Hardik Pandya and Avesh Khan were the players to miss out. The pitch was good, with some balance and variations.

India and Pakistan came next on the field, with the two skippers leading the way. 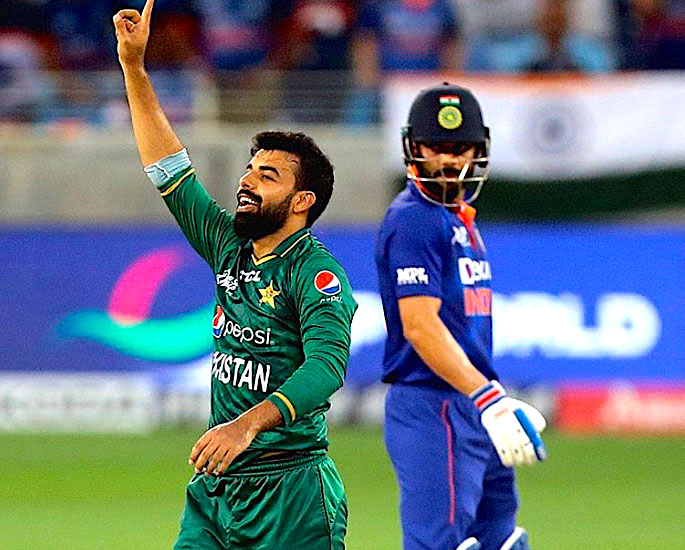 India got off to a flyer, scoring eleven off the first over by Naseem Shah. The second and third overs were also much the same, as India came out all guns blazing.

India got to their 50 off twenty-six overs, in the fifth over, averaging over 12 runs per over. This was the fastest fifty for India against Pakistan in a T2I power play.

Rohit Sharma (28) was the first to depart for India, skying the ball off a top edge from a Haris Rauf slower delivery.

KL Rahul (28) was unable to control the first ball of Shadab Khan, as Mohammad Nawaz took a fine catch at long-on.

After a blistering start, India was 62-2. Despite the double blow, Team India kept hitting the balls, with virtually no dots.

However, India lost their third wicket on 91, as a Suryakumar Yadav (13) top edge found Asif Ali at square leg off Nawaz.

Meanwhile, India reached their fastest hundred against Pakistan in 10.4 overs.

Rishabh Pant had a brief and unconvincing stay. He was out for fourteen after a mistiming reverse sweep saw Asif taking an easy catch off Shadab.

Hardik Pandya was out for a golden duck, punching a sharp fast delivery off Mohammad Hasnain, with Nawaz taking a fine catch at short midwicket.

Australia Brett Lee was in attendance, smiling away as he was conversing with others. 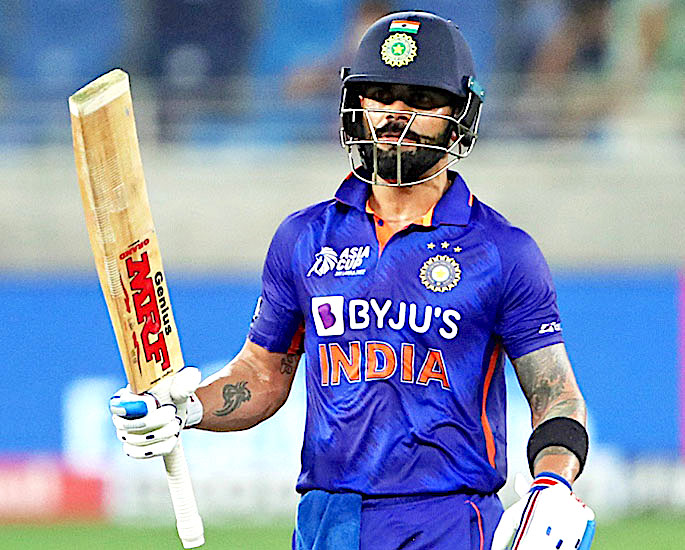 Virat Kohli came back in form with a signature six to bring up his 50 in the 18th over. In the 19th Nawaz took a third fantastic catch at wide long-on to send Deepak Hooda packing for 16 off Naseem Shah.

Pakistan was quite brilliant in the field overall, especially with their catching throughout the Indian innings.

The contribution of Virat came to an end, as he was run-out courtesy of a direct throw from Asif.

Ravi Bishnoi, has two lucky fours and a reprieve, giving India a final total of 181-7.

Shadab was happy that Pakistan returned strongly, with a match evenly in the balance.

“We made a good comeback after a quick start and we did well in the middle overs as well. I try to keep things simple, which is the toughest thing in cricket.

“Earlier, I had complicated it, which resulted an injury as well. The last two boundaries can definitely hurt but we will be aiming for a good start to the chase.

“The pitch is a lot better, the ball is coming on to the bat nicely.”

Pakistan was happy to peg back India. Though Fakhar Zaman not being at his usual best put a dampener. 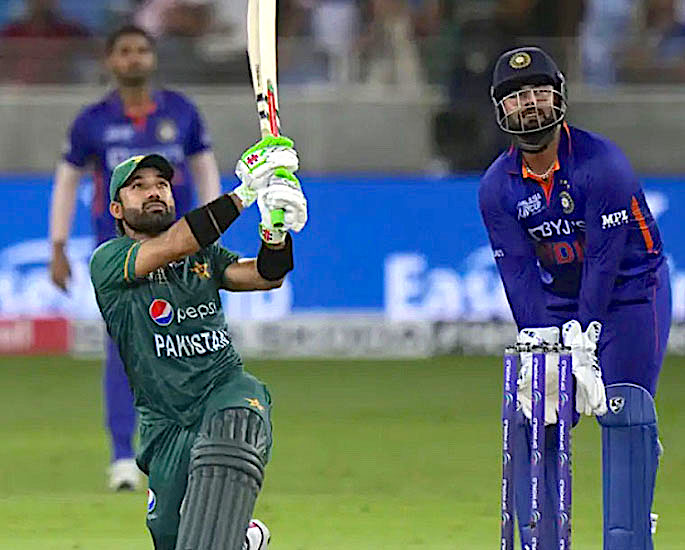 Pakistan went chasing a relatively big score, knowing that they had to start well. The advantage that Pakistan had was the ball nicely coming onto the bat.

However, for Babar Azam and Pakistan, it was a disaster, as the Pakistan captain and opener had a soft dismissal.

It was a dream for young Bishnoi, striking in his first over. For Babar Azam, the decision of him persisting to open was a poor one.

Irrespective of the result, it was yet another sign that Fakhar was the best power hitter opener for Pakistan.

Despite Pakistan’s 50 coming in the seventh over, it was about trying to balance between a partnership and ticking the score over.

Though this was not the case, as the run rate kept creeping up and Fakhar was out. Virat Kohli took a customary catch at long-on off Yuzvendra Chahal.

The pressure was on Fakhar due to a basic powerplay from Pakistan. Mohammad Rizwan notched up his 50, with Pakistan reaching their hundred in the thirteenth over.

Nawaz hit a glorious four as he and Rizwan made 50 runs partnership of twenty-nine balls. Though the left-hander was finally out after making a top-notch 42 off twenty balls. 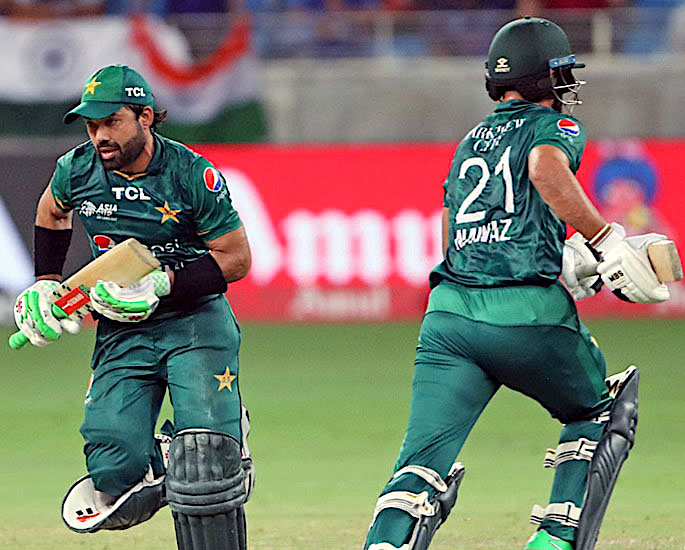 The safe hands of Deepak Hooda at long-off from a bouncier ball by Bhuvneshwar Kumar. Was this going to be a turning point in the match?

It began seeming so temporarily, as Rizwan was out the following over to a slower delivery from Hardik Pandya, with Suryakumar Yadav taking an easy catch.

It was left to Asif Ali and Khushdil Shah to take Pakistan across the finishing line. Arshdeep Singh dropping a dolly and smiling afterwards was not pleasing to the eye, especially as it had Rohit fuming.

That dropped catch was so crucial as Pakistan made nineteen runs in the nineteenth over. Arshdeep Singh did his best to do wonders in the final 2oth over.

Asif was out lbw but Pakistan won the game by five wickets, with one ball to spare.

Skipper Rohit Sharma had a very dignifying response at the post-match ceremony, along with acknowledging his legendary batsman:

“Credit to Pakistan, they obviously played better than us.

“Virat’s form is brilliant, there’s no doubt about that. Every batter, especially Virat, helped us get that score because we lost a couple of crucial wickets in the middle.” 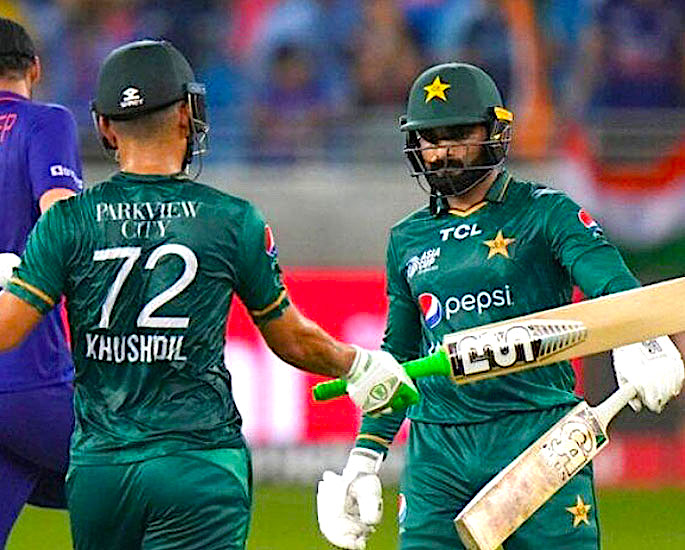 Captain Babar spoke about keeping all the basics right, the collective contribution, not being at his best and singling out his fellow opener, an all-round performance, the slow bowlers and pacers.

“I try to keep things simple,” he says. “Credit goes to the team for the effort they put in.

“I thought they had an edge after the way they utilised the PP. But the bowlers came back to restrict them.

“I didn’t fire today but Nawaz and Rizwan’s partnership was outstanding. I thought Nawaz could exceed because they had two legspinners operating so we spent them up.

“Our spinners and fast bowlers at the death set the stage for us.”

After picking up his player of the match award, Mohammad Nawaz shed some light on his and the team’s strategy:

“For a left-arm spinner, it’s important to stick to the basic line and length. If one or two balls turn, that puts doubt into the batters’ minds. After that, I try and stick to line and length.

“We needed 10 runs per over when I walked in to bat so I knew I had to attack every chance I got. My mind was clear that I’d hit out at every ball in my zone.

“I didn’t try and overplay, which you sometimes can when you’re under pressure.”

The decision to move Nawaz up the order was a master call by coach Saqlain Mushtaq and Babar. India has a lot of problems, both in batting and bowling.

Meanwhile, Pakistan is excelling in all departments. The only big concern is the opening partnership and Khusdil who looks vulnerable in crunch situations.

It was Asif who made Pakistan victorious in the end., with his swashbuckling batting. Pakistan is in good stead to reach the final. India have to pick themselves up again.

DESIblitz congratulates the Green Shaheens on winning a really close game against India.