Hardik Pandya handled the pressure as India overcame Pakistan in a tense Group A affair. We highlight the Asia Cup 2022 T20I match.

"I'm likelier to pull it off when I'm calmer"

Hardik was highly-powered throughout the match, starting with his bowling and finishing with the blade.

The rivalry came head-to-head once again as India faced Pakistan at the Dubai International Cricket Stadium on August 28, 2022, in a night game.

An hour and a half before the game, fans began streaming in, full of hope for this battle of the best from Asia. The atmosphere was getting electric, as the ground began filling up.

Both sides playing for national pride and glory took the field for a warm-up knowing this will be the first of a few matches at the Asia Cup 2022.

India certainly had the edge, having beaten Pakistan in their previous three Asia Cup encounters between 2016 and 2018.

The pitch was ideal for fast bowlers, meaning bowling initially was the obvious decision. The grass in the middle was enough for Indian skipper Rohit Sharma to field first. 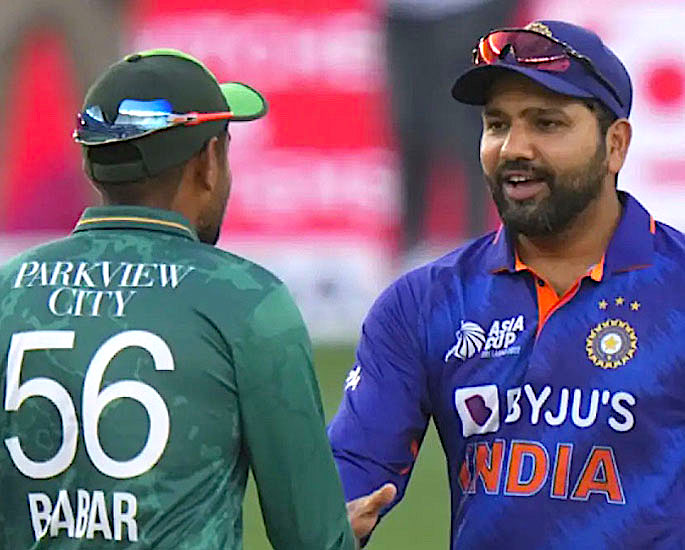 Gloveman Dinesh Karthik surprisingly came ahead of Rishabh Pant, with Avesh Khan also making the playing XI. It was not a bad decision, and Dinesh did well with the gloves and during the closing moments.

Pakistan rightly went with three fast bowlers and two spinners, with Naseem Shah making his debut for this blockbuster match.

Pakistan team had worn black armbands, in support of the flood victims back home. The match umpires Masudur Rahman (BAN) and Ruchira Palliyaguruge (SL) came onto the pitch, with the players following behind.

The teams lined up for the national anthems before the game got going. 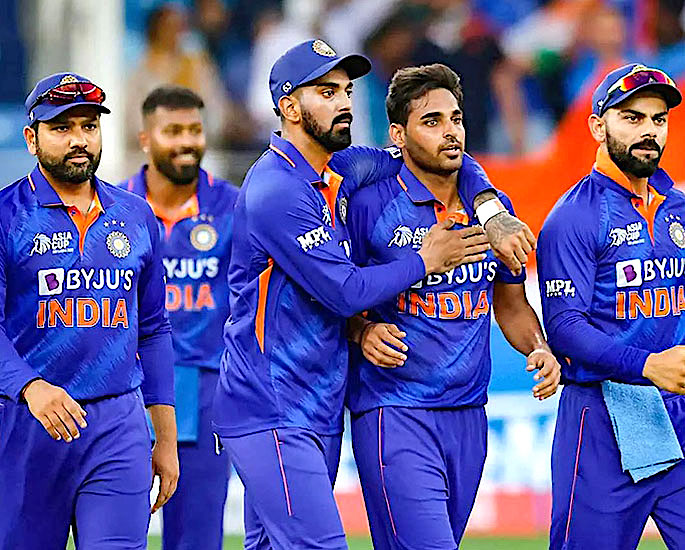 The first over was quite eventful, with two reviews, which were always going to go in Pakistan’s favour. The first two overs saw Babar Azam punching straight fours with a solid base.

However, Pakistan had a big blow in the third over, as Babar (10) got a top edge to Arshdeep Singh off a Bhuvneshwar Kumar bouncer.

Babar’s early wicket still begs a key question. Should he not bat at number three? After all, Pakistan needs to safeguard their best batsman.

Pakistan was going to face a stern test, on a bowler-friendly pitch, after losing a relatively early wicket. Fakhar Zaman came to join Mohammad Rizwan who was struggling outside the off stump.

By the sixth over, the stadium was almost full, with South Indian actor Vijay Deverakona also in attendance. In the very same over, Rizwan got his touch back, smashing a six and a four off consecutive deliveries.

Though things got worse for Pakistan in the same over as Fakhar Zaman (10) went walking back to the pavilion. It was a strange dismissal as the Indians did not really appeal.

What appeared as a feather was a clear edge from Fakhar to Dinesh Karthik off Avesha Khan. Again, Pakistan needs to rethink playing Fakhar at number three as he is a power hitter.

Pakistan lost both of their first two wickets to short deliveries, which was the perfect length on this pitch. Even left-arm off-spinner Ravindra Jadeja got a ball to lift off the pitch, shocking Rohit Sharma with the dryness.

The pitch was slightly uneven. with a few balls here and there not bouncing as high.

As the match was progressing, Pakistan did not learn from their mistakes. Iftikhar Ahmed (28) also had to depart after getting an edge behind off a rising Hardik Pandya bouncer.

Hardik did the same with Rizwan (43) as he fell seven runs short of his fifty. Rizwan tried to leave the ball, but he left it too late as Avesh Khan took a good catch at deep third.

Pakistan then put themselves in bigger a hole, as Khusdil Shah (2) was also out to a short delivery. Hardik had taken two wickets in the 15th over. 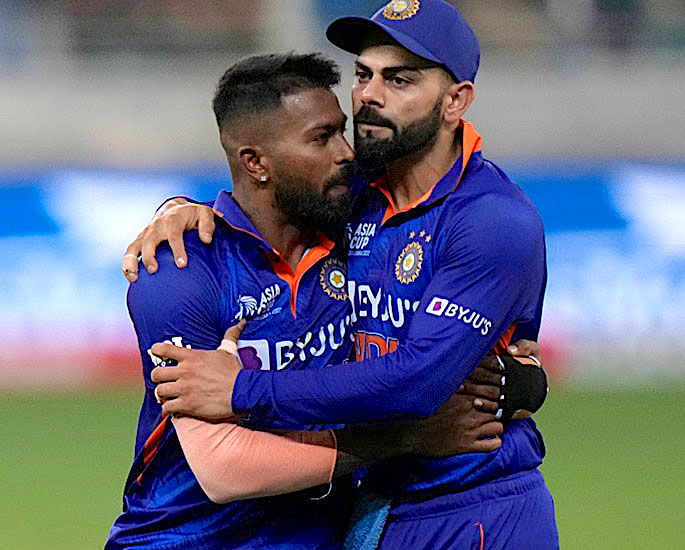 Jadeja at sweep cover had not much to do, apart from safely catching the ball to dismiss Khushdil.

The place of Khushdil is questionable, with a low T20I average. Shoaib Malik who had a good T20 Cricket World Cup 2021 should be in the team without a shadow of a doubt.

Asif (9) Ali was unable to do much, picking Suryakyamar Yadav at long-off from a Bhuvneshwar slower delivery. The Pakistan batsmen had no timing and connection throughout their innings.

Mohammad Nawaz (1) was the seventh wicket to fall, edging behind off a standard delivery from Arshdeep Singh. Despite two reviews, Shadab Khan (10) and Naseem Shah (0) were out on consecutive deliveries, plumb lbw to Bhuvneshwar.

He took 4-26, which was the best bowling figures by an Indian against Pakistan in a T20I match. Shahnawaz Dahani was the last man out, courtesy of an Arshdeep yorker.

Bhuvneshwar spoke to Star Sports at the halfway stage about the approach and how the pitch was playing:

“When we looked at the wicket, we thought it would swing but there was no swing. There was bounce, but we know what balls we have to bowl.

“When you bowl short, few were skidding and some were coming slow.”

Even though Pakistan had a late flurry, losing eight wickets for sixty odd runs saw them score a below-par total of 147.

Pakistan Bowlers and Hardik Pandya playing a Gem of a Knock 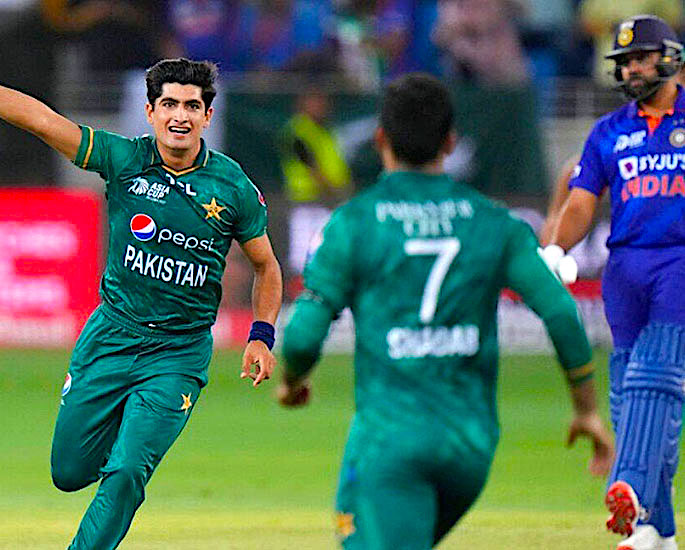 It was game on as Naseem Shah got rid of KL Rahul in only his second ball, to leave India on 1-1. Rahul had his wickets crashing, off a big inside edge for a golden duck.

In the same over, Virat Kohli had a massive reprieve, with Fakhar Zaman missing a difficult catch at second slip. He then got a top edge for a six in the fourth over. These were early signs that it was not meant to be for Pakistan.

That gave Virat confidence as we got to witness some aggressive batting from him, picking glorious fours off Shahnawaz Dahani and Haris Rauf.

There was a big cheer from the Indian supporters inside the ground each time Virat hit the ball.

Meanwhile, Mohammad Nawaz had shown a big heart. After getting hit for a big six, he got the big fish, Rohit Sharma (12). He was out due to a miscue, with Iftikhar Ahmed catching him at long-off.

The next over, Virat Kohli (35) had to go, chipping the ball to Iftikhar again at long-off as Nawaz was on a hat-trick. Virat did not follow through as he got an inside edge.

At the mid-way stage, India still had the edge though, especially with Ravindra Jadeja hitting a mighty 98-meter straight six off Nawaz.

However, Naseem then skittled  Suryakumar Yadav for eighteen to make things interesting. Just when things were getting tight, Hardik Pandya came to the party.

He hit Haris Rauf for three fours in the 19th over to make life so easy for the final over. Hardik and Jadeja had a 52 runs partnership off thirty-four balls.

In spite of Nawaz taking his third wicket, bowling out Jadeja for thirty-five, the victory was just inevitable. Hardik finished the match in style with a big six. 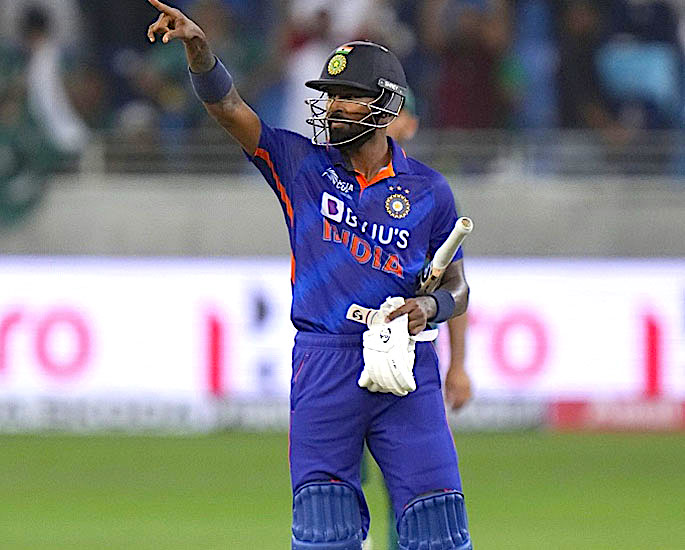 Considering Pakistan had to defend a low total, Pakistan bowlers gave their hearts out. Naseem had a fabulous debut, claiming 2-27.

At the end of the day, Pakistan was about ten runs short. This is something which Babar Azam went on to mention in the post-match ceremony, along with not being able to secure the win in the end:

“The way we started we were 10-15 runs short. “We came back thanks to our outstanding fast bowling.

“Dahani stepped up with the bat which really gave us something to defend, but it’s a shame we couldn’t finish it off.”

Babar also spoke of the strategy for the final over, as well as crediting the Indian all-rounder:

“We wanted to have 15 or so to defend for Nawaz, but that wasn’t to be and Pandya finished it off wonderfully.”

The slow over-rate of Pakistan did not help matters as well, with only four fielders able to field outside the circle during the latter stages.

A happy Rohit Sharma said they had the belief even during the halfway mark of their batting, with the close triumph very satisfying.

“Halfway through the innings, we still believed. That’s the kind of belief we want to have in this group, where you’re not in the game and you still manage to pull it off.

“We want to make sure they’ve all been given enough clarity around what to do in the middle.

Complimenting his bowlers and the heroics of Hardik Pandya, Rohit added:

“The fast bowlers have done very well in the last 12 months or so. We were challenged at times but overcoming those challenges will take us forward.

“Since Hardik’s comeback into this team, he’s been brilliant. Had a great IPL too. His batting qualities we all know, he has been brilliant with the bat since he came into the team.”

Hardik Pandya had a big smile on his face, picking the player of the match award. Speaking about his all-round performance, Hardik told Sanjay Manjrekar:

“It’s important to assess the situation and use your weapons. “The hard lengths particularly. But you have to use them wisely.

“When it comes to batting, the chances I take when executing, I’m likelier to pull it off when I’m calmer. I knew they had Nawaz waiting to bowl, and while we needed 7, even if we needed 15 I would have fancied my chances.”

So. there we have it, India takes round one in a possible three matches against Pakistan. If the other matches are this nail-biting, we can expect a cracking Asia Cup 2022.

DESIblitz congratulates Hardik Pandya for his stunning performance with the bat and ball, as India claims first blood in one of cricket’s biggest rivalries.