"I knew that I could hit his carom ball and I had spotted it."

Pakistan defeated India by one wicket in the 2014 Asia Cup group tie played at the Shere Bangla National Stadium in Mirpur, Bangladesh on March 1, 2014. Chasing 246 runs to win, Pakistan reached the target with two balls to spare.

Boom Boom Shahid Afridi proved to be the hero for the defending Asia Cup champions, smashing two consecutive sixes in the final over. With this result, India are virtually knocked out of the tournament.

With Sri Lanka having already beaten India and Pakistan earlier on in Fatullah, the Pakistan versus India match was a must win game for both sides.

Pakistan won the toss and decided to field, taking into account the dew factor and India’s ability to chase big totals.

Pakistan opened the bowling with off-spinner Mohammad Hafeez who had a good record against left handed batsmen. The experiment worked once again as he dismissed Shikhar Dhawan lbw for 10, leaving India on 18-1.

Rohit Sharma was averaging less the twenty-six before this match. Thus his hunger for runs was quite evident as India’s fifty came in the 9th over.

But Pakistan kept striking on regular intervals. The in form Virat Kohli was caught behind off Umar Gul for just five runs. Rohit kept going, bringing up his fourth One Day International (ODI) fifty against Pakistan. However he could not convert that into a century. Another rash shot saw India being reduced to 92-3, as Rohit departed for 56. 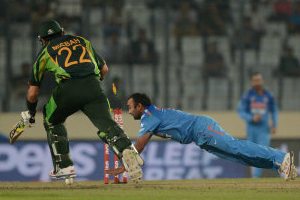 Ajinkya Rahane was holding up one end, but when he fell for 23, India were in trouble at 103-4.

Bollywood director/actor Farhan Akhtar who was in the stadium seemed quite concern as the men in blue continued to play irresponsible shots. Dinesh Karthik was next to follow as he was caught by Saeed Ajmal for 23.

Ambati Rayudu who was playing a steady knock, brought up his fifty. Ravindra Jadeja’s world wind 52 off 49 balls swung the momentum in India’s favour. Team India finished on 245-8 in their allotted fifty overs.

The Pakistan openers started by dominating the Indian pace attack, scoring at more than six runs per over. They notched up sixty-seven runs in the first ten overs.

That’s when Kohli introduced spin, which turned the game on its head. First ‘Our [Ravichandran] Ashwin’ bowled Sharjeel Khan for 25, to end the seventy-one run opening stand. 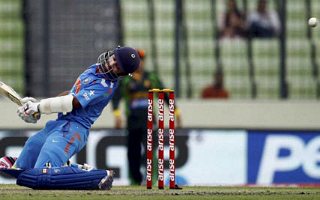 Leg spinner, Amit Mishra who found turn from his very first ball got the key wicket of Ahmed Shehzad, caught at mid wicket by Ashwin for 42.

Then as per norm Pakistan panicked – Hafeez got his captain Misbah-ul-Haq (1) run out after initially calling for a single. Pakistan went from 71-0 to 113-4 as Umar Akmal (4) once again played a poor shot.

But for Pakistan, Hafeez put up a seventy-five run rescue act, which included an eighty-seven run partnership with Sohaib Maqsood. With 46 runs off 44 balls required, Pakistan lost Hafeez (75) and Maqsood (38) in the space of four runs.

That’s when Boom Boom Afridi came to the party, bringing the equation down to 13 needed off 12 balls.  But then in another twist Afridi lost three partners (Gul 12, Talha 0, Ajmal 0) in the space of five balls. Pakistan were now 236-9, requiring ten runs off the last five balls. 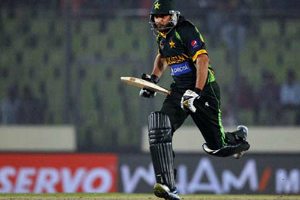 But two balls is all Afridi needed, as he slammed consecutive sixes to seal a famous one wicket win over India. Afridi remained not out on 34 off 18 balls along with Junaid Khan who scored 1 run.

Speaking to the media, a buzzing Afridi said: “I knew that I could hit his carom ball and I had spotted it. It was pulled back slightly but I connected it really well.”

“He had the field set on the on-side, keeping the fielders up on the off-side. I thought that if I could play through extra cover, I can find runs through that region,” he added.

Hafeez who took 2-38 combined with his resilient batting was declared man of the match.

Sharing his joy the all rounder said: “Shahid Afridi with his magnetic episode finished the game very well. I would like to thank the crowd and dedicate this victory to the people of Pakistan.”

Former Indian captain, Sunil Gavaskar was very critical of the commitment shown by the men in blue. “The Indian team’s work ethic has been abysmal. The business of optional practice has to stop,” said the 64-year-old.

This tournament has already seen some surprise results and close encounters. Afghanistan caused the biggest upset at the Asia Cup after beating hosts Bangladesh by thirty-two runs. This was Afghanistan’s first win against a test playing nation.

Afghanistan has now made it to the ICC ODI Rankings for the first time after registering the win over Bangladesh. They are ranked 12th in the table.

Four matches remain in the Round-robin format. If all goes according to form, the final should be contested between Pakistan and Sri Lanka on Saturday 8th March, 2014.

Faisal has creative experience in the fusion of media and communication and research which increase awareness of global issues in post-conflict, emerging and democratic societies. His life motto is: "persevere, for success is near..."
Suz Member set for Pro Boxing Debut
Premier League Football 2013/2014 Week 25