"Martina, thank you for lending me Leander!"

It took the Indo-Swiss pair just 62 minutes to wrap up their straight sets victory in the final at Melbourne Park.

They broke serve once in the first set and a further two times in the second set to provide an entertaining show for the spectators at the Rod Laver Arena.

This victory at the 2015 Australian Open is the fifteenth Grand Slam title for Kolkata-born Paes, who has won eight men’s doubles titles and seven mixed doubles titles in his career. 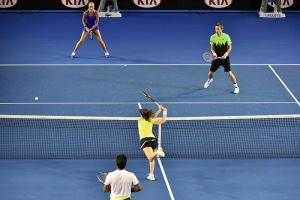 This win comes with huge pride for Paes, who said: “It’s a great honour to keep coming back to Australia.

“It’s a treat to play with Martina. I finally managed to learn some things from her returns and returned half decently today. It’s intriguing.”

It was Paes’s former mixed doubles partner, the enigmatic Martina Navratilova, who suggested that he pair up with Hingis.

Paes added: “There are a few people who got us together. All you guys back home who put us together to win our first Grand Slam, thank you.”

Hingis said: “Martina, thank you for lending me Leander!

“I think we even grew with every match. The confidence, the teamwork, the suggestions we had, one or the other, we really trust each other. I think that was the key in every match.”

The victory is particularly sweet for Hingis who returned to the game in July 2013, after having previously retired. She said: “Who would have thought it? It’s more than I could ever dream of.” 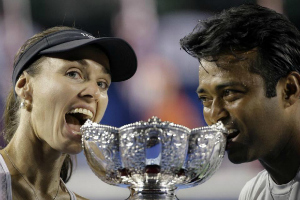 Even the Prime Minister, Narendra Modi, took to twitter to congratulate the pair: “Leander Paes continues to make us proud! I congratulate him on the Mixed Doubles win with Martina Hingis at the Australian Open.”

It has been a while since either of the two have lifted a Grand Slam trophy, with Paes last winning the US Open title in 2013 following up with a third round defeat in 2014.

For Hingis, her best result prior to this was a 2006 win of the Australian Open mixed doubles. Incidentally, that time she played alongside another Indian player, Mahesh Bhupathi, also beating Nestor in the final.

It seems that age is just a number when it comes to tennis players. Previously, when a player reached the age of 30 they became known as a veteran of the sport.

However, with the advancement of nutrition and modern training regimen, it seems that 30 is no longer the end of the road in the world of tennis.

The likes of Leander Paes (41), Martina Hingis (34), Daniel Nestor (42), Roger Federer (33) and Lleyton Hewitt (33), continue to prove that some tennis players are like a fine wine, only improving with age.