Fourth seeds Leander Paes [IND] and Radek Stepanek [CZE] won the 2013 US Open Men’s Doubles final with a comprehensive win, whilst there were mixed fortunes for Sania Mirza [IND] and Aisam-ul-Haq Qureshi [PKN].

"Legend Paes is a treasure for India. He is just a wonderful player."

The Indo-Czech pair seeded four were up against second seeds Alexander Peya [AUT] and Bruno Soares [BRZ]. But this was completely a one sided contest as Paes and Stepanek, the 2012 Australian Open champions simply took apart their opponents.

They took just twenty-three minutes to win the first set 6-1. It was a similar story in the second set, as they raced into a 3-1 lead and an injury to Peya delayed the inevitable. 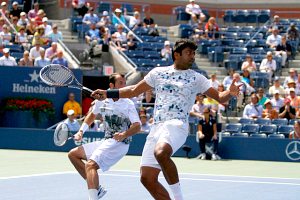 Paes and Stepanek marched on to take the title 6-1 6-3 in an hour and twelve minutes. Besides the trophy, both players received a sum of $460,000 to share.

Paes now joins a select group of players who have won a Grand Slam at the age of 40 and over. And he has directly qualified for the season ending World Tour final.

“I think the greatest advice to anyone looking for a good doubles partner is right here. Find someone from the Czech Republic. They work hard, they play hard. And I got to thank my partner Radek for a great couple of weeks,” joked Paes.

The winning pair reached the final after seeing off stiff competition from the Bryan brothers [USA] 3-6, 6-3, 6-4 in the semi-finals. Paes and Stepanek were expecting a tough if not tougher match in the final against Peya and Soares, but that was not the case as it turned out.

It started so well for Paes and Stepanek as they took their opening service game and broke serve immediately, before retaining their own serve. 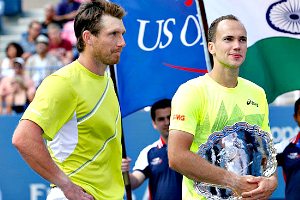 In the fourth game, Peya was struggling to hold his serve and Stepanek capitalised on this by sending a strong return on serve at 0-40 to seal the break and take a strong 4-0 lead.

They increased the lead further to 5-0, which now became rather embarrassing for their opponents.

However, Peya somehow managed to keep hold of his serve to win the game making it 5-1 –  Was this the beginning of a great comeback and potentially a turning point in the game?

Paes soon put any fightback to bed early by comfortably holding his serve, and so taking the first set 6-1.

It was quite apparent that both Peya and Soares were quite nervous and tense in the first set of their debut Grand Slam final.

The second set unfortunately started off the same way as the first as an early double fault by Peya sent them down an early break. To add further misery Paes hit a forehand volley to save a break of serve. 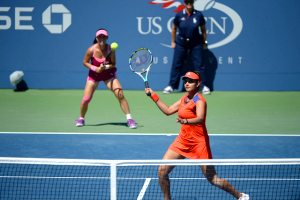 The tension and physical strain was now clearly showing on the Austrian Peya who serving at 1-3 had to take a medical time out due to some back pain.

After a lengthy delay the match resumed as Peya continued struggling with his play, but somehow managed to keep hold of his serve.

Meanwhile the fourth seeded pair held onto their respective serves and broke Peya once again to make it 5-3.

Paes who had the honour to serve for the match, achieved this with ease with one final volley clinching the 2013 US Open Men’s Doubles title.

Commenting after the final on what winning the trophy meant, Stepanek (CZE) said: “I think it means, to us, as a team – you know, we have always been as a team on the court, and this trophy I think this year is very special because of what we have been both going through. It all means a lot, to both of us.

“There is one thing we would like to achieve, and that’s winning the World Championships in the end of the year, because that’s the trophy which is missing in Leander’s showcase,” he added.

This victory for Leander Paes was greatly admired in his native country of India and one fellow country man left a comment on the US Open website saying: 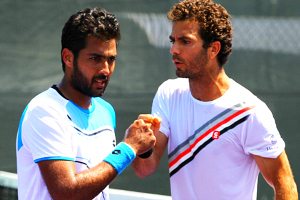 “Legend Paes is a treasure for India. He is just a wonderful player.”

Truly, a remarkable career for an extraordinary Indian tennis player.

It looked promising for India’s pin up going into the semi-finals but came short against the world number 8 seeds.

Aisam-ul-Haq Qureshi [PKN] and Jean-Julien Rojer [NED] were beaten in the quarter-finals of the Men’s Doubles by the eventual winners Leander Paes and Radek Stepanek 1-6, 7-6, 4-6.

Mahesh Bhupathi [IND] and Philipp Petzschner [GER] crashed out in the first round, while Rohan Bopanna [IND] and Édouard Roger-Vasselin [FRA] could not go beyond the third round of the Men’s Doubles.

So, a mix of emotions for the Asian contingent in this year’s US Open, with a few making an early exit, whilst others advancing to the second week of the tournament. However, for one individual it was an absolute fantastic day. Congratulations to Leander Paes for yet another great achievement on the tennis court.

Sid is a passionate about Sports, Music and TV. He eats, lives and breathes football. He loves spending time with his family which include 3 boys. His motto is "Follow your heart and live the dream."
Premier League Football Transfers 2013/2014
Technology changing the Face of Football