Paes celebrated an incredible milestone of 100 doubles partners in June 2015.

The new men’s doubles tennis pairing of Leander Paes and Andy Murray enjoys their first victory in the Montreal Masters.

Paes and Murray won five out of nine break points and claimed a swift victory in just 61 minutes..

They are through to the second round of the ATP tournament in Canada and will face Jamie Murray and John Peers on August 12.

Paes has ended his short-lived partnership with Serbia’s Daniel Nestor. Since teaming up in April 2015, they had yet to reach the finals of any major tournament.

Now with a world number three singles player on his side, the 42-year-old Indian will hope to make better advances in the game. 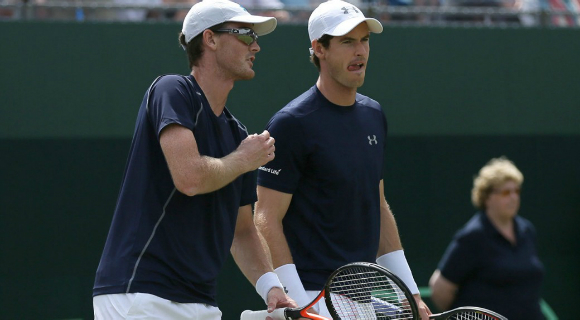 Andy, whose bid to win his second Wimbledon title was ended by Roger Federer this July, looks ready to take on another challenge.

The 28-year-old will play his elder brother and 2015 Wimbledon finalist, Jamie Murray, for the first time in an ATP World Tour match.

“I’ve never played my brother since we became professionals.

“So it’ll be nice in some ways to do that but also it’s not easy. Serena and Venus [Williams] have obviously done it playing for Grand Slams and stuff and I can’t imagine how difficult that is.”

Paes celebrated an incredible milestone of 100 doubles partners in June 2015. It seems he will be moving onto number 102 very shortly.

Rumour has it his partnership with Andy is temporary and he will next pair up with Fernando Verdasco, who rose to world number seven in the singles ranking in 2009.

Andy will take on the unseeded Tommy Robredo on August 11 in the singles draw, before joining Paes to face his brother and Peers in the doubles match on August 12, 2015.