Lawn Bowls is not a sport traditionally associated with Pakistan. But in 2014 that changed when Chico Mohammad, Muzahir Ali Shan and Muhammad Shahzad were part of a quartet of bowlers who flied the flag for Pakistan at the Commonwealth Games.

“Once you put your foot on the green and you start playing bowls, you get such a peace."

For a very long time, lawn bowls was considered as an unknown and unrecognised sport in Pakistan.

But in 2014, Mohammad Ayub Qureshi, Muzahir Ali Shan and Muhammad Shahzad put Pakistan on the world map for lawn bowls as they were part of a quartet of bowlers who featured at the Commonwealth Games in Glasgow.

The exciting sport of lawn bowls is relatively new in Pakistan. The national governing body, known as the Pakistan Lawn Bowls Federation (PLBF) registered in 2010 with World Bowls and the Pakistan Olympic Association.

Zaker Mahmood, Vice-President of (PLBF), along with Mohammad Basharat and Rana Maqsood, set up the federation. 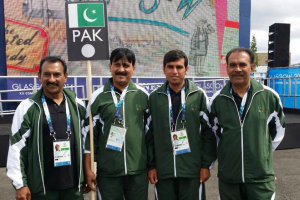 Pakistan made history when their international lawn bowling team participated at the 2014 Commonwealth Games in Glasgow.

With the sport being not so popular in Pakistan, officials selected three Glaswegian based players of Pakistani origin to join the four member squad.

It was truly a proud moment and once in a lifetime chance for Qureshi, Shan and Shahzad to display some good bowls at Glasgow 2014, whilst inspiring young British and South Asians to take up the sport.

Lets take a closer look at the three men who put Pakistan on the lawn bowls map of the world: 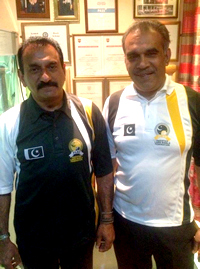 As well as being the owners of the popular Ali Shan Tandoori Restaurant, both Qureshi and Shan are keen bowlers. They have played the sport for over twenty years across various clubs in the city.

The bowlers are well known around the city and are good friends of Scottish Politician, Alex Salmond. When they are not working at the restaurant, the duo like to head out to the Bowling Green to relax.

Qureshi exclusively speaking to DESIblitz said: “Once you put your foot on the green and you start playing bowls, you get such a peace. You play bowls to your best ability and you know you forget the rest of the world for a few hours.”

Qureshi along with Shan were introduced to the game through their bank manager who was an excellent bowler himself.

Recalling the early days and their love for bowls, Qureshi added: “At the time, we did not know what lawn bowls were.

“We use to go to the club, and thought that’s a piece of cake. But once you put your foot on the green, then you realise it’s a different ball of game. And ever since then we’ve been hooked on it.” 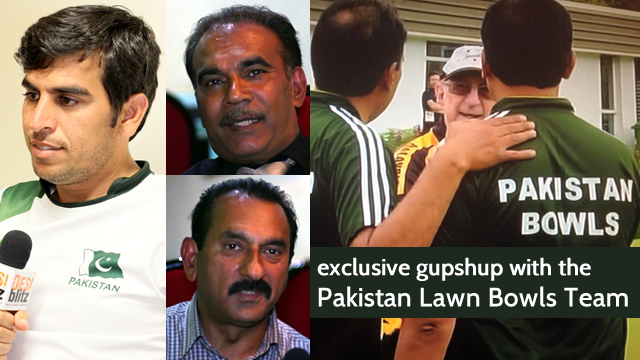 Both of them were left stunned when they were asked to play for Pakistan at Glasgow 2014.

Qureshi and Muzahir entered two events at the Commonwealth Games, including the Men’s Doubles and Triples competition.

While the pair did not go beyond the preliminary round of both events, they did however win the hearts of the Scottish and Pakistani fans.

Qureshi and Shan are encouraging the old and young to take up the sport. They feel it’s a good deviation from household chores and other activities associated with desi communities. 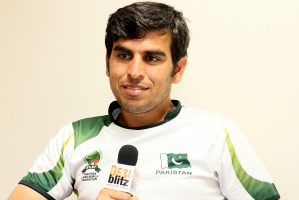 Biochemist Muhammad Shahzad had not been acquainted with lawn bowls whilst living in the North West Province of Pakistan.

Studying for a PhD at the University of Glasgow, Shahzad had not only taken up the sport, but also represented Pakistan in the Men’s Singles competition at the 2014 Commonwealth Games.

It was at the Kelvingrove Bowling Club, when Shahzad first got attracted to the game. During an open day at the club, after throwing a few bowls, Shahzad realised he can excel in this game.

Speaking about how he got involved with the sport, Shahzad said: “I saw the Kelvingrove lawn building en route to Yorkhill Hospital. I was quite curious about how this game is played.

“I went into an open day at the bowling club. When I played a few shots, the coaches there said ‘you are amazing, you can play this game very easily because you have the natural talent for it’.” 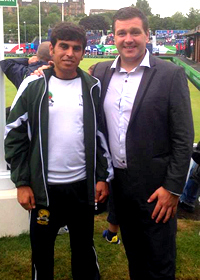 A sport, which began more as a fun activity, soon became a professional reality as he started playing regularly for the Crookston Bowling Club.

Recognising his potential, Shahzad underwent training from some of the best coaches in Glasgow.

Having won a few events, Shahzad grew in confidence. He grabbed the opportunity and enjoyed the game a lot.

When Shahzad came to know that Pakistan had no team, he wrote to the nation’s Olympic Committee requesting to participate and field a team at Glasgow 2014.

After getting the approval and being selected, Shahzad received immense support from university colleagues and friends in Scotland.

“I can’t explain that feeling in words when you represent your country at such a big event like the Commonwealth games. It was just an amazing experience.”

Though Shehzad lost in the preliminary round of the Men’s Singles competition, he did perform well above the expectation of his coaches and colleagues.

Making their dream debut at Glasgow 2014 was a remarkable story for Muhammad Ayub Qureshi, Muzahir Ali Shan and Muhammad Shahzad.

The trio plan to develop and grow the sport further in Pakistan. They also have their eyes on bigger tournaments, hopefully participating at the Rio Olympics in 2016.

Faisal has creative experience in the fusion of media and communication and research which increase awareness of global issues in post-conflict, emerging and democratic societies. His life motto is: "persevere, for success is near..."
Leander Paes wins 2015 Australian Open Doubles
ICC Cricket World Cup 2015