Aamir Khan took to Twitter to share his excitement at meeting Arnold Schwarzenegger in New Delhi on November 31, 2014. Arnold was in India to speak at the 12th annual Hindustan Times Leadership summit.

"I’m a huge fan! And I love him not only for his body, but also for his movies."

We all have our celebrity idols, who if we unexpectedly met would cause us to momentarily freeze in awe.

Turns out that the celebs are just the same! Aamir Khan recently gushed over Twitter at meeting his idol Arnold Schwarzenegger at the 12th Hindustan Times Leadership summit in New Delhi on November 21, 2014.

Schwarzenegger, who was due at his session on November 22nd, 2014, had checked into his hotel a day early when he found out that Aamir was also around.

The former Governor of California popped by to say hello to Aamir, after finding out that the Bollywood superstar was a big fan, and of course our Aamir was both shocked and elated.

Mr Perfectionist tweeted out: “Hey guys! Guess who I met?”

“I’m in Delhi today, speaking at the HT Summit. His session is tomorrow. I told the HT staff I wish I could meet him. So they told him. And he just walked into my room!!!

It was a bizzare feeling! I looked up when the door opened and I see THE TERMINATOR walking into my room!

Funnily enough Aamir couldn’t stop praising Arnie for his bodybuilding book, The New Encyclopaedia of Bodybuilding that Aamir has been religiously reading since his buff phase began.

Aamir told Arnie that the book had been like a ‘bible to me’, having read it many times, at which point the ‘Governator’ touched his bicep and said: “I can see that!” 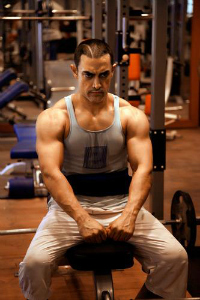 It was probably an unusual conversation to behold, as we all know that the serious Aamir always talks about important social issues, particularly being at a leadership summit.

But it’s not everyday you get to meet your idol, and clearly Aamir was so excited at the encounter that all he could do was gush over the American star:

“I’m a huge fan! And I love him not only for his body, but also for his movies. I think he’s an underrated actor!” Khan said.

Well now we know where Aamir has been getting his inspiration from for his incredible abs for Ghajini, Dhoom 3 and P.K., and it seems Arnie approves just as much as we do!

A big promoter of the sport, Arnie began weight-training at the age of 15, and became the youngest ever Mr. Olympia at the age of 23.

Later, while speaking at the summit, Arnie recalls: “My goal was to become the greatest body-builder of all times… and then how can I take that name and fame and be involved in something – and that is how I got involved in the fitness crusade.”

As one of the leading veteran action stars of Hollywood, Arnie has spurned a new generation of big action blockbuster films, including the classic Terminator series. 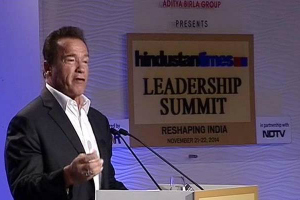 During his summit speech, Arnie also spoke about his famous feud with Sylvester Stallone, both actors who were famed for their action stunts:

“I fought with Sylvester Stallone for a decade – we hated each other… it was war straight, all the way through. But finally in the late 90s, we became friends.”

With a competitive streak, Arnie admits that he had to learn to take the ups and downs side by side:

“I’ve had many failures but what makes you a winner is when you fail, you get up again, dust yourself and you keep going.

“I figured out how to be successful through sports: Big Vision, Dream Big – it is the only way to get to the top. Don’t be afraid to fail. Don’t look for shortcuts. Don’t listen to naysayers.”

The summit appearance is Schwarzenegger’s second visit to India, and the inspirational leader certainly left a big impact.

We’re pretty sure Aamir won’t be forgetting the day he met his hero Arnold Schwarzenegger for a very long time!

Aisha an English literature graduate, is a keen editorial writer. She adores reading, theatre, and anything arts related. She is a creative soul and is always reinventing herself. Her motto is: “Life is too short, so eat dessert first!”
Deepika and Hrithik caught kissing?
Happy Ending ~ Review