Amir Khan has ended months of speculation by announcing he will fight Chris Algieri, instead of British rival and IBF welterweight champion, Kell Brook.

“I’m an unbeaten world champion and deserve and command respect, but he talks to me like I’m nothing."

Amir Khan has angered fellow British boxer, Kell Brook, by announcing Chris Algieri as his next opponent. Khan will fight the former light-welterweight world champion on May 30, 2015.

The 28-year-old boxer has come under some pressure to take on his British rival, but stated that he has already held deep negotiations to fight somebody else.

Khan took to his wife’s YouTube channel to confirm he will be taking on the 31-year-old Algieri and said the fight is likely to take place in New York in the 147lbs (welterweight) division.

Kell Brook, however, is not happy that his call-out to Khan for a fight has been pushed back to some time ‘within the next 12 months’.

Brook commented in an interview: “If someone said to me you can get £5 million, a world title, fight at Wembley with a fight that every fan wants to see, it’s a no-brainer for me. 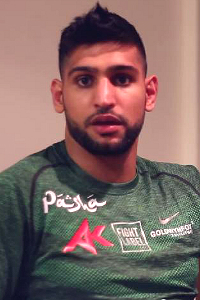 “He’s fighting Algieri who didn’t win a round against Manny Pacquiao, a feather puncher, not a big puncher. It doesn’t make sense to me.

The Sheffield- based boxer continued: “I’m world champion, I’m calling him out, we want the fight, there’s a world title and a bagful of money and it doesn’t make sense that he’s fighting this guy who’s bringing nothing to the table.”

Brook defeated Jo Jo Dan and retained his IBF belt on March 28, 2015, but was dismayed that Khan showed no respect for his achievement.

He said: “Khan has no respect for me and looks down his nose at me, but I’ve done everything asked of me.

“I’m an unbeaten world champion and deserve and command respect but he talks to me like I’m nothing.”

Brook added: “But now he thinks he can jump the gun and fight Floyd Mayweather or Manny Pacquiao before me, when I have earned the right to do so. I don’t know who he thinks he is. It’s about ego for him.”

No matter what ill words are spoken by Brook, he knows that a fight with Khan holds high prestige and that the winner will receive a lot of respect and attention. Brook also believes that defeating Khan will validate his status and propel forward his professional profile.

Khan has taken these comments lying down though. Following Brooks’ interview, Khan has tried to clear the air on Twitter:

Can everyone please wake up. I said the fight between me and kel brook will happen. When I think it's right. Look at who kel fought last ????

Setting his rivalry with Brook aside, King Khan is excited about the upcoming battle. He describes Algieri as an ‘A class’ opponent who has fought some great matches and held a stellar record, only losing to Manny Pacquiao in his 21 contests.

The two-time world champion speaks highly of his next opponent: “This is another fight which is going to bring a different style.

“I’m really looking forward to it and hope the fans get behind this fight. Hopefully, this can lead me on to the bigger fights in the future.”

Although the venue for the highly anticipated fight is yet to be confirmed, Khan has expressed his preference to fight in New York’s Barclays Center:

“We’re looking at fighting in New York – it’s a great venue for me – and it’ll be good for the UK fans in a way. It’ll give them a chance to travel and it’s not as far as Las Vegas.”

Indeed, not only will his British fans welcome the Khan-Algieri battle, his supporters in the US will be equally thrilled. The last time Khan fought in New York was May 2010, when he triumphed over Paulie Malignaggi in his American debut.

Reannan is a graduate of English Literature and Language. She loves to read and enjoys drawing and painting in her free time but her main love is watching sports. Her motto: “Whatever you are, be a good one,” by Abraham Lincoln.
Saina Nehwal crowned World Number One
2015 Indian Premier League T20 Cricket ~ IPL 8