"By doing this expedition I will be able to form bridges between different cultures."

Misba Khan, a Finance Officer from Manchester, has been selected to represent Britain, at the Women’s Euro-Arabian North Pole expedition 2017.

Hand-picked by the distinguished polar explorer, Felicity Aston, Misba will become the first British Pakistani mother to ski to the North Pole.

Upon returning from her training in Iceland, Misba is now ready to conquer her Polar journey.

Through melting Arctic environments, Polar Bear adventures, drifting ice and glaciers, you will witness this unique woman in action.

She will return with a distinctive perspective on women-nature-connections. With a role in promoting inter-cultural dialogue through skiing.

In an exclusive interview with DESIblitz, Misba talks fitness, wellbeing and nutrition. She also explains her incredible training in Iceland and environmental risks. 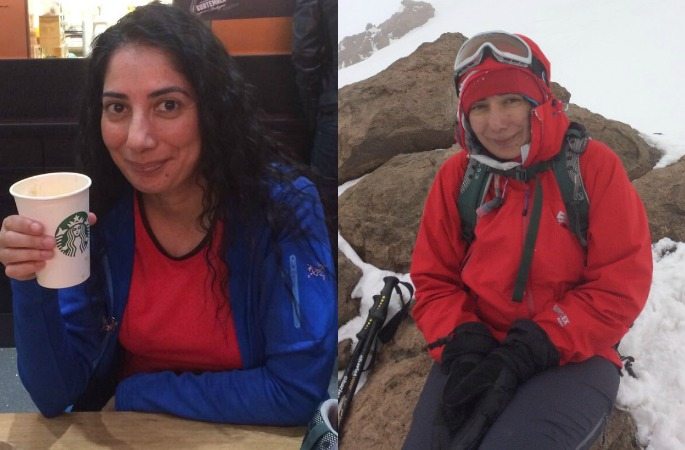 Not only a mother to her children, she’s also the oldest member of the expedition team: “Mama Misba – Am cool being the eldest, I’ve just adopted everyone!! And the name is great,” she says.

For these reasons, Misba naturally possesses the qualities of a great team leader.

Accordingly, being a mother and a woman over 40, has provided her with the patience and risk assessment necessary for mountaineering.

And from there begins Misba’s formidable feat. Daring to go on a journey to the North Pole.

Why does Misba Khan want to go to the North Pole Expedition 2017? 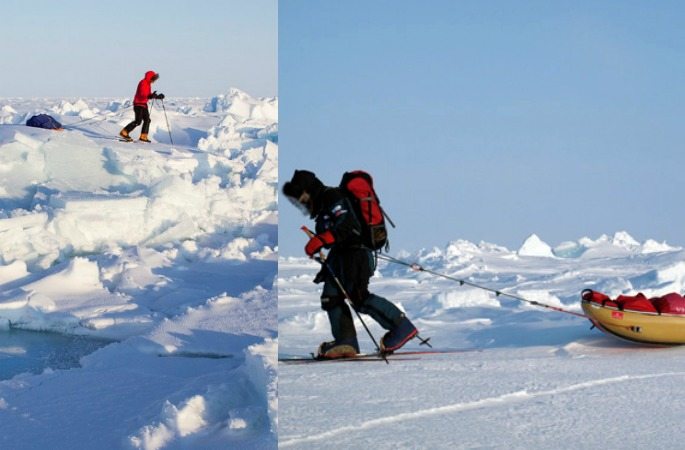 The North Pole expedition 2017, brings together women from across Europe and the Middle East.

Given this, its aim is to welcome cross-cultural connections. Misba says:

“I am excited to have the opportunity to immerse in an unfamiliar environment. To be amongst a team of inspiring and driven women.”

With the aim to create exceptional dialogues between skiing and culture, the expedition will educate on leadership, climate change, and the application of strategies to implement global change. 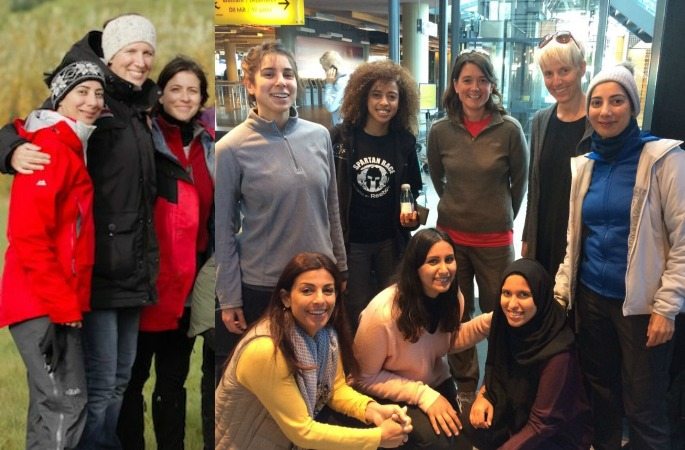 Misba hopes that: “By doing this expedition I will be able to form bridges between different cultures. Encouraging women both within and out of my community to gain new skills.”

As a result, the North Pole expedition 2017, will highlight the capabilities of women.

Misba wants women to realise that they can achieve their dreams, however, far-fetched they may seem. In particular, to boost their self-esteem.

She says: “I would like to show people that those from all abilities and backgrounds could get involved in activities that may push themselves for their own self-development.”

Indeed, it will be a truly life changing and a self-improving experience for the talented mountaineer of Manchester.

So what helps heighten her level of excitement? 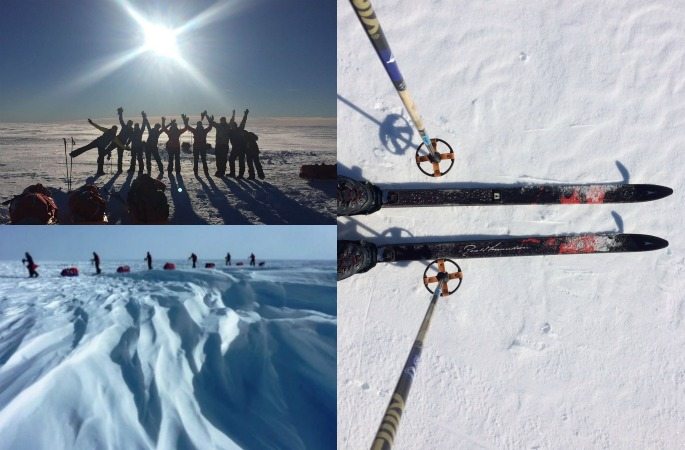 After returning from her training in Iceland, Misba admits it has given her an clear insight in what to expect from the expedition:

“A special atmosphere where we didn’t live in the real world for a few weeks, we motivated and learned from each other,” she says.

And now, the fresh-faced 47-year-old is prepared to cross the shifting sea ice of the Arctic Ocean.

“It reminded me of the land of Narnia. Old, an enormous white mass of ice,” she describes.

However, the land of Narnia comes with its own dangers and threats. Misba tells DESIblitz:

“There was one night I felt very cold as temperatures had reached -16 degrees C. I struggled to sleep. To keep myself warm.”

The most difficult, she believes, would be swimming across if needs be and the cold weather injuries.

Undoubtedly, her biggest fear: “You’re camping on thin ice and that’s dangerous. It moves in the middle of the night. Nothing’s going to stop it from cracking under your tent.

“There was a moment when I questioned my decision. But I had to get over this doubt and in a funny way the team of women was my inspiration. We kept a good atmosphere in the tent,”she says.

Despite these difficulties, Misba is excited to take on the enchanted ride, through the white snow covered landscapes.

And certainly, every episode of training has prepared Misba to make the expedition more enjoyable and safe:

“Meeting the group and teammates, having our roles and practising them on glaciers was such an advantage. I enjoyed the process of learning new skills, learned a lot about myself,” she explains.

Misba on Nutrition, Fitness, and Wellbeing 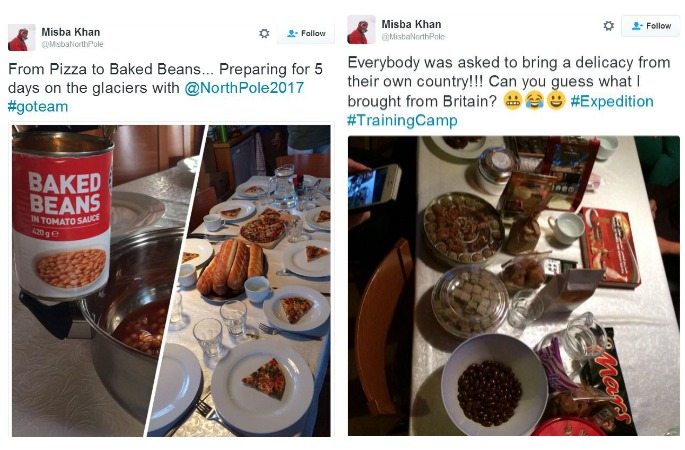 Noting the challenging nature of skiing, Misba will be required to build her physical and mental performance for the North Pole expedition 2017.

She will need to include all the fundamental components of fitness, nutrition, and wellbeing in her daily life.

However, the talented hiker already lives by the mantra of keeping fit and healthy. She particularly enjoys outdoor activities.

Misba Khan tells us: “I usually go trekking with the Ramblers group. Cycle to work now and then, and quick swim when I can fit it in.”

Moreover, mountains turned out to be her strength. Misba has achieved something truly special by reaching the peak of Britain at the top of Mount Ben Nevis. Including Snowdonia.

The mountaineer has also explored the highest peak in Iran and the Middle East, at Mount Damavand. Her trek in Iran also included climbing mount Tochal in Tehran.

Additionally, she has experienced magnificent trekking in the High Atlas and Toubkal Mountains of Morocco.

Above all, Misba has performed a safe and successful ascent of Mount Kilimanjaro.

“The extreme cold and the hard works, makes u feel very hungry. Special foods will be made for our expedition,” Misba says.

When tackling the mountains, would she be taking any climate and pocket-friendly snacks?

“Lots of Chocolates, nuts, and raisins!” she happily adds.

What role do the mental aspects play in regards to skiing?

“I have never been skiing before. This expedition involves cross country skiing. It is 80 percent mental and 20 percent physical. You need your concentration,” she worries. 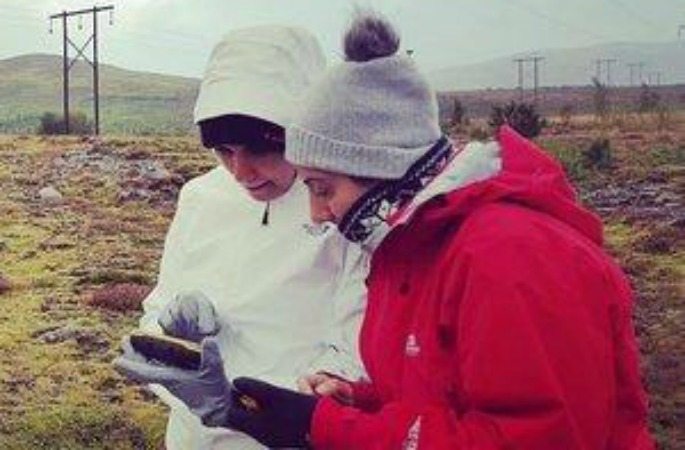 Misba is very appreciative of the support she receives from her family:

“My kids are great I have always encouraged them to outdoors. Today I feel honoured to have that support back from them,” she expresses.

Misba adds: “The community is also behind me. With dedicated supporters following the progress of the team via social media, I get messages of support.”

Furthermore, the Finance Officer is greatly inspired by Sir Ranulph Fiennes, who is an explorer and a writer.

A copy of the book signed by her hero is now a precious treasure for Misba, reading: “Best of luck up North.”

In addition, Snow & Rock, an outdoor and winter sports clothing and equipment brand, has chosen to sponsor the skilful mountaineer’s ski kit:

“This is an inspirational and uniting project. A journey that will involve worldwide media coverage, international brand exposure, and leverage,” Misba says.

What’s Next for Misba Khan?

Everyone is excited to find out about Misba’s next adventure. But she says: “I take one thing at a time and concentrate on it. I can only answer this once I get back. But for now, lots of layers, and one kind of exercise a day.”

Misba Khan is off to the glacier, celebrating a cultural blending through skiing.

Become a Polar area enthusiast and discover the force of nature, through the official North Pole Euro-Arabian expedition 2017 website here.