ndia’s Bala Devi has created history by signing a deal to play football with Rangers FC and becoming the first Indian woman to sign professionally.

She will be the first female footballer to become a professional player anywhere in the world and is Rangers FC’s first South Asian star.

Subject to international clearance, the 29-year-old is joining the Scottish club for an 18-month-deal and will wear the number 10 shirt. This comes after she completed a successful trial at the club in November 2020.

Her track record exemplifies the signing, with her being the top current scorer for India’s national woman’s team. Since 2010, she scored an incredible 52 times in 58 games, making her the top international goalscorer in South Asia.

At the young age of 15, Bala Devi was called up to join the national Indian team and she has served as the captain of the team.

Domestically, Bala has scored over 100 goals in 120 games as well, becoming the top scorer in the Indian Women’s League for over two seasons. In 2015 and 2016, Bala was named the All India Football Federation (AIFF) Women’s Player of the Year. 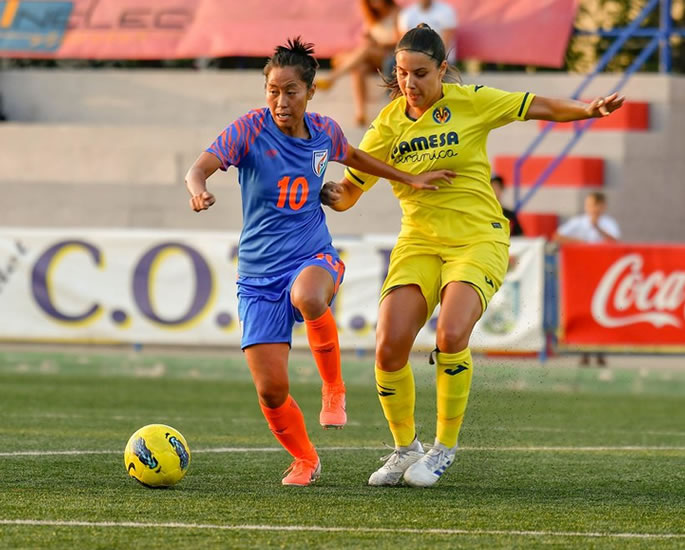 Bala Devi feels the move to Rangers has come at the right time in her footballing career, after having done a stint at the New Radiants Sports Club in the Maldives. She said:

“In Scotland, I was very confident because I’ve been playing for the national team for 14 years, so I felt that I can make it if I tried my best.

“We played a friendly there and I scored twice, and I’m sure I will score in the league as well.”

“To play my football in Europe with one of the biggest clubs in the world is something I could never have dreamed of.

“I hope my move to Rangers serves as an example to all the women footballers back home in India who dream of taking up the sport professionally.

“I’m looking forward to making the most of the top-class facilities and coaching and I am certain I will benefit immensely from the standard of training and competition.

“I’m very grateful to Amy McDonald, the coaching staff and the entire management at Rangers for believing in me.

“Also, this move wouldn’t have been possible without Bengaluru FC who have been instrumental throughout. I can’t wait to get to Glasgow, join my teammates and give this my best shot.” 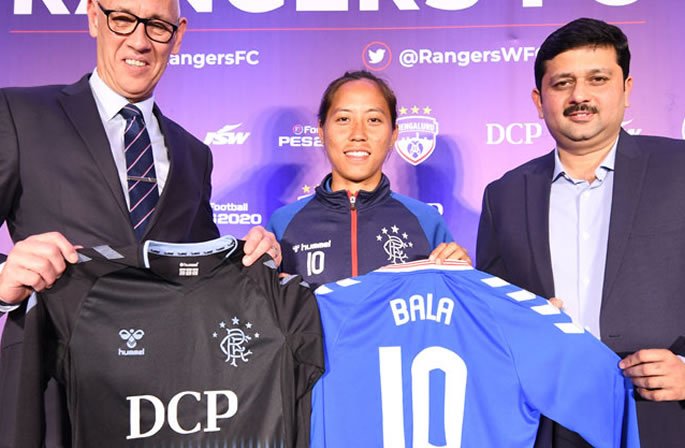 Reacting to the signing, Football Manager of the Women’s and Girls’ team, Amy McDonald, said:

“We are thrilled to welcome Bala to Rangers. She is an exciting signing on so many levels.

“Bala is a playmaker who likes to play as a number 10 and we believe she will contribute goals and assists to the team.

“She will provide us with an attacking threat and a versatility that we can utilise to our benefit going into the 2020 season.

“Bala is already a role model for girls across India and they will now be able to see her travel across the world to become a professional footballer.

“Her move can be inspirational for players everywhere to show them where football can take them and what it can help them achieve.”

At the announcement, Mark Hateley, Head of Club Ambassadors and Business Development, said:

“She comes with a lot of goals and experience. A goalscorer always catches the eye. And we trust in her, you don’t give the number 10 jersey willy-nilly.” 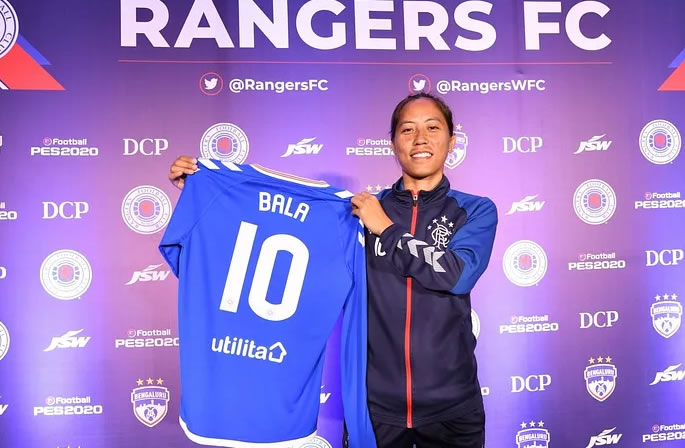 “I would like to warmly welcome Bala to both Rangers and to Glasgow. We believe this is a huge step for the women’s game both in Scotland and in general.

“Rangers are committed to building a successful women’s team for years to come and the acquisition of a talent like Bala is another step towards our goal of domestic and European success.”

Naturally, a lot of work has gone into the transfer behind the scenes and this would not have been possible without the co-operation of Bengaluru FC, who struck a partnership with Rangers FC in September 2019.

Bengaluru FC club CEO Mandar Tamhane was appreciative and thankful to the many people that played their part in making the transfer of Bala Devi possible. This included the lawyers from Ranger FC, support from the All Indian Football Federation, Sunil Chhetri, Bhaichung Bhutia, Renedy Singh and Oinam Bembem Devi.

“We are delighted at Bala securing what is a historic move to Rangers Football Club.”

“Once we knew that Bala had done more than enough to impress the coaching staff at the club during her trial stint in November, we were determined to help to make the move happen in any way that we could.

“Bala’s signing with Rangers sets a very encouraging precedent for women footballers from India and we are glad that Bengaluru FC’s partnership with Rangers is creating the right kind of impact in such a short period of time.”

Encouraged by Bala Devi’s signing, he revealed that only when there is a proper league structure in place will clubs enter into the Indian women’s football scene.

“We would like to have a women’s team that trains for a whole year and plays a proper season, like the men’s team. So once we have a proper 3-4 month-long league, then we would definitely put out a women’s team.”