The song was the first to be announced as part of the film’s soundtrack. However, Dr Zeus has alleged that the makers have used his track without acquiring any sort of rights or giving him any credit.

For the film, the song has been performed by Badshah, Shalmali Kholgade, Gurdeep Mehendi and Sachin-Jigar.

In the song, the film’s lead Ayushmann Khurrana is seen dancing to Badshah’s rapping, along with Yami Gautam and Bhumi Pednekar.

Ayushmann shared the song on social media and wrote:

“If you got it, don’t be shy, just flaunt it! The wait is over! #DontBeShy song out now!”

However, the music composer was not happy about the use of his song and took to Twitter to slam the filmmakers as well as Badshah and Sachin-Jigar.

He went on to say that he would be taking legal action.

Dr Zeus posted: “Are u guys taking the p*** @sonymusicindia @MaddockFilms @Its_Badshah @SonyMusicUK @SachinJigarLive wen did u compose don’t b shy & kangna.. more to the point how dare u guys b riding off ma old hits & f***** them up??? Ya need to get original. My lawyers will b in touch.”

Are u guys taking the piss @sonymusicindia @MaddockFilms @Its_Badshah @SonyMusicUK @SachinJigarLive wen did u compose don’t b shy & kangna.. more to the point how dare u guys b riding off ma old hits & fuckin them up??? Ya need to get original??My lawyers will b in touch??

After Dr Zeus’ public callout, Badshah responded, apologising and saying that he received the song from Sachin-Jigar.

The rapper also claimed that he was only given the song after they ensured that they had the necessary rights.

He wrote: “I am aware of the situation around ‘Don’t be shy’.

“I want to start by saying that I love and respect Zeus paaji immensely and he knows it.

“He has the right to get angry with me because he’s my senior and I’ve learnt a lot from him.”

“And he is the last person I’d want to go through something like this. I got on the song, which has been recreated by my dear friends Sachin Jigar, only after making sure we had the necessary rights.

“But still if there’s any misunderstanding, ill make sure it gets cleared asap. I support Zeus Paaji.”

The controversy comes after Bala was accused of breaching a copyright violation after similarities were spotted with the film and Ujda Chaman.

Director Abhishek Pathak was not pleased with the similar storylines.

He said: “There are some similarities that can be seen between Bala and Ujda Chaman. I don’t know what’s happening.

“I came with my trailer on October 1 and they came out with it around 10-11 October. So this question should be to ask them how is it similar?

“If they had seen my trailer, they should have done something… At least, change something.”

Both films are about a young bald man. Both sets of film posters and even the trailers had similarities.

Bala is set to release on November 7, 2019, but it does not look like the controversy surrounding the use of Dr Zeus’ song will go anywhere anytime soon.

Watch the Music Video for ‘Don’t Be Shy’ in Bala 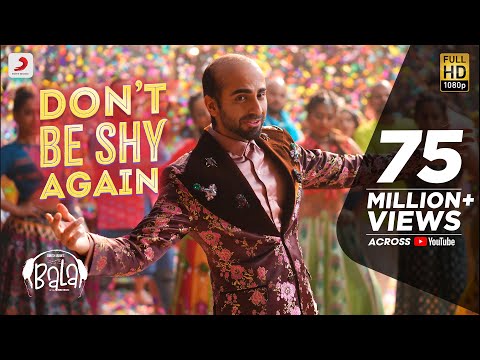 Dhiren is a journalism graduate with a passion for gaming, watching films and sports. He also enjoys cooking from time to time. His motto is to “Live life one day at a time.”
Bakulaben makes Bharatanatyam Dance debut aged 75
Bappi Lahiri records Two Songs with Lady Gaga