Young cueists are performing on the green baize. We look at 5 exciting UK Pakistani snooker players who are making a mark in the sport.

"We share the same birthday and are good long potters"

Despite having Pakistani heritage from a family perspective, they have learnt their snooker art on the United Kingdom island.

All these UK Pakistani snooker players have gone on to perform at the amateur junior levels, becoming champions across varying competitions.

Three of the players from the same family have also completed the spectacular 147 break.

We present 5 shining UK Pakistani snooker players who all have the big break ingredients, with exclusive reactions. 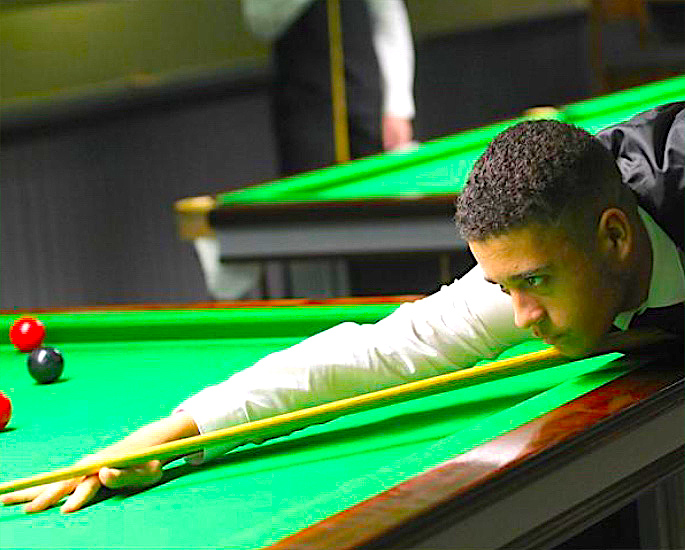 Isa Ishtiaq is one of the most exciting UK Pakistani snooker players. He is a left-handed snooker player who can switch hands if need be.

Isa was born in Bradford, England, on April 27, 2003.  His father Ishtiaq who was also a club player has family roots from Kharian village, Pakistan. His maternal side is of mixed heritage.

At around the age of eleven, in 2014, Isa began playing at Bradford’s Cue Gardens where former world snooker champion Joe Johnson coaches.

Joe also gave coaching sessions to Isa in a group context every Saturday for one and half years. With Isa quickly ahead of the pack, he went on to practice at Northern Snooker Centre in Leeds.

There, at the junior level, his first coach was a former snooker player and World Professional Billiards and Snooker Association (WPBSA) Coach Ian Williamson.

English Snooker player Peter Lines became his coach from the age of fifteen. Ishtiaq, reveals Peter suggested he could provide 1-1 coaching to Isha, which was like on and off as and when required.

Isa mentions that Peter praised his natural ability, smooth cue action and “fantastic” approach to the game. Though, Isa adds that Peter also gave him some valuable advice too:

“If you are going to become a snooker player, be serious about your work ethics. “

Besides being a good break builder, Isa feels he has “the bottle to handle the pressure, especially when the chips are down.”

His first accomplishment was the 2017 Leeds Under-16s event. Winning five matches on the trot, he beat Samuel Stevens (ENG) 2-0 in the final.

As of 2021, his biggest achievement was being triumphant at the 2019 Mius Cup European Under 18s. Not only did he top his group, but he also won every knock-out game.

He came from behind to beat Bradley Cowdroy (ENG) 5-4 and win the trophy. In reply to a question of how he felt after this victory, Isa said:

“I was on top of the world and could not believe it, especially I was busy preparing for my exams, leading to this competition.”

He has an average time shot of twenty seconds. 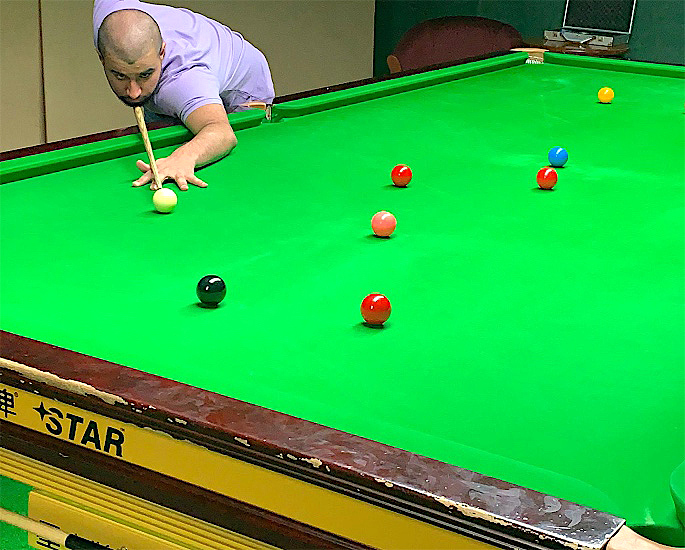 Mohammed Faizan is a right-handed snooker player from the Midlands. He was born in Birmingham, England on July 4, 2003.

Faizan also familiar as Fizzy comes from a family, with a link to Dadyal, Azaad Kashmir, Pakistan. Growing up in the Ward End area, it was at the age of twelve that he first held a cue.

His first experience of playing snooker was at his uncles’ house in Kitts Green. His uncle was also a local club player.

At thirteen, his dad gave him a 6ft 3inch snooker table as a gift. From then on, he began playing pretty much every day.

According to Faizan, it was when he got to seventeen that he took snooker seriously. It was like now or never for him:

“It was always in the back of my mind, so I thought let me give it a good go.”

After two previous attempts, Faizaan made the 147 maximum at Masters Snooker Club in Birmingham:

“I fell short on the pink and black previously. Hence, on my third chance, I had the determination to complete this task.”

His first-ever competitive victory was the 2017 Handicap Ranking Series. Despite giving a head start to his opponents, he won five consecutive matches in the tournament.

He comfortably beat Ansser Saleem 4-1, to claim £200 and the winner’s trophy.

On August 22, 2021, he was victorious at the Under-20 Regional Development Tour (North division). He successfully came through the group stages (4 matches), quarter-finals, semis and final.

He overcame Jake Croft 2-0 in the final, which was organised by the English Partnership of Snooker and Billiards.

Faizaan’s strength lies in long potting and being around the balls. Speaking about his ambitions within the sport, Faizaan says:

“I want to play on the main circuit, win tournaments and make a name for myself.”

Faizan who sees Ronnie O’ Sullivan as his hero has taken a few coaching lessons. Andrew Highfield, a (WPBSA) coach has naturally given him some tips at Golden Cue Snooker Club in Bilston.

Faizan has an average shot of 18-19 seconds. 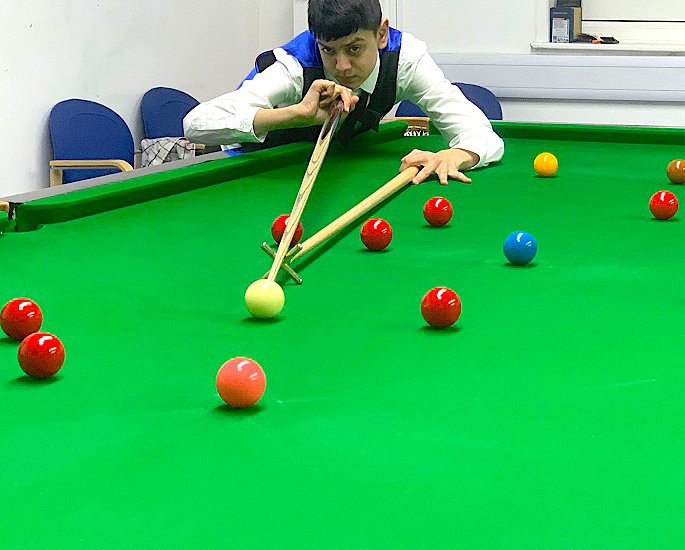 Amaan Iqbal is amongst the top young UK Pakistani snooker players. He is a Scottish snooker player who has already had a taste of snooker at the highest level.

Amaan was born in Glasgow, Scotland, on February 17, 2006. He is the eldest of four brothers who all play snooker.  When eleven years of age, he first had the opportunity to pick up a cue at Masters Snooker Club, Dennistoun in 2016.

After spending a year there, he then began practising at Minnesota Fats Snooker Club, Glasgow for a year. There he had coaching sessions from 2016 Indian Open champion, Anthony McGill.

Following one year (2018) at Inn Off Snooker Club, Glasgow, he began practicing at the Family Snooker Unit in 2019.

Amaan has twice made the magical 147 in practice and against his brother Ayaan Iqbal. Amaan states he had to “keep his nerves intact at the end.”

As of 2021, his highest competitive break was 131 against Steve Wardropper at the Scottish Junior Cup.

His first success was being victorious at the 2018 Cumbernauld Grand Prix 2018 (Under-14s), winning five consecutive matches.  In the final, he convincingly defeated Sam McKay (SCO) 2-0.

At the Under-16s level, his biggest triumph was becoming the 2021 Lacarno Open Champion in Edinburgh. He won the final, courtesy of a 3-1 win against Wardropper.

Amaan, a right-handed player is a good break builder. He looks up to four times world champion, John Higgins (SCO):

“I have always followed the Scotsman and tried to replicae his style and performances.”

Aman made his family proud, after competing at the 2021 Scottish Open Qualifiers as a wildcard. This was due to him being the highest raked Under-21 player on the amateur circuit. 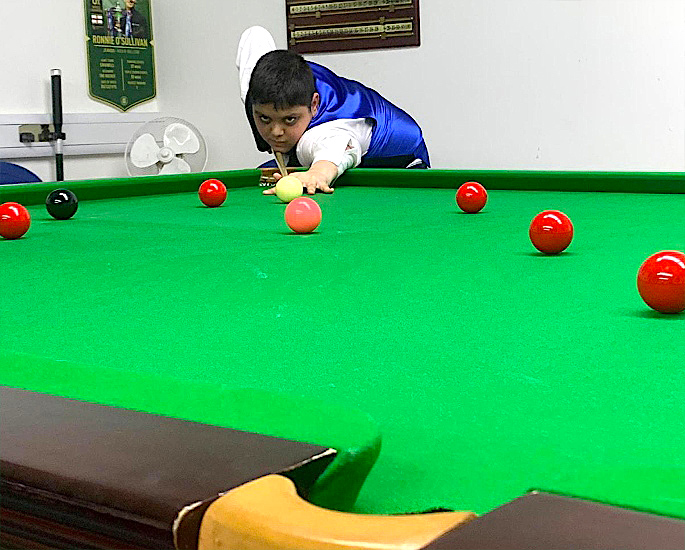 Ayaan Iqbal is one of the most naturally gifted UK Pakistani Snooker Players. He was born in Glasgow, Scotland on February 20, 2007.

His first experience of snooker was at the age of ten at Master Snookers Club in 2016. Thereafter, he also followed a similar path to his brother, practicing at various clubs.

He also made the glorious 147 in practice at his Family Snooker Unit. Speaking about the confidence he had when clearing the final balls in 2020, Ayaan told us:

“I never felt pressure on colours. I knew I will smash every ball in the pocket with ease.”

To have such confidence at a very young age fares well for his future. His highest break in competitive play is 126 against Sam McKay at the Scottish Junior Cup.

He also had a 2-0 clean sweep against Sam in the final of the 2019 Dumfries Open. He won a total of four matches.

His biggest achievement at fourteen was, lifting the 2021 Minnesota Fats Scottish National Championship 2021. Winning matches, he defeated, Jack Borwick (SCO) 3-1 in the final.

“He has an aggressive walk around the table, putting fear in his opponents’ eyes.

“His composure and cue action is phenomenal.”

Despite being a right-handed player, Ayaan is also very natural with his left hand. That is a great skill to have going forward.

Ayaan has an average time shot of 24 seconds and is shorter in height compared to his brother Amaan. 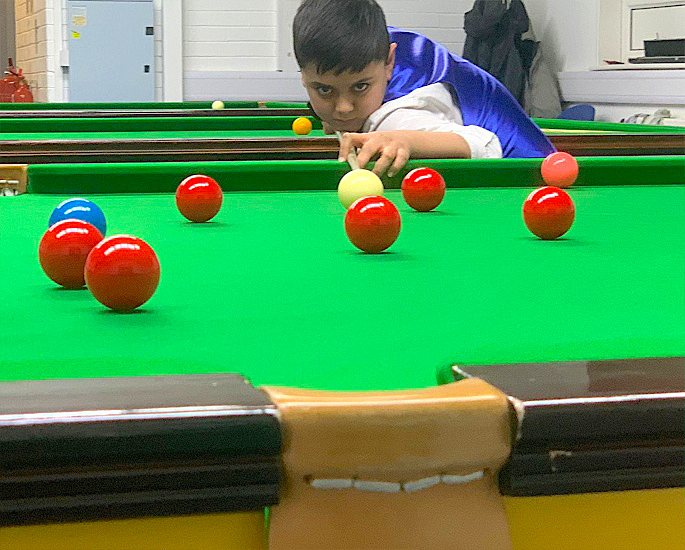 Azaan Iqbal is also in line to play snooker at the highest level. The amateur player was born in Glasgow, Scotland on August 20, 2009.

At the age of eight, he also began playing snooker at the Masters Snooker Club, Dennistoun in 2016. Like his brothers, went on to different clubs to play the game before settling at the Family Snooker Unit.

He is the third brother to achieve the unbelievable 147 feat during practice in 2021. Azaan admits, despite being nervous at the end, he potted the final black.

Azaan has already won the 2017 Scottish Junior Snooker Academy Minnesota Fats Championship. He was 2-0 victorious versus Manmeeth Kainth (SCO) in the final.

He was also a runner in the 2019 Dumfries Open. Azaan says his favourite player is Judd Trump (ENG), explaining why:

“We share the same birthday and are good long potters, having a similar style of play.”

Azaan does not waste time on the snooker table. He is a fast play, with an average shot time of 18 seconds.

It is worth mentioning here Adyan Iqbal. the fourth and youngest talented brother. He is right-handed and also good left-handed.

Whilst England is an option, all these players will be open to representing Pakistan, especially at a future Snooker World Cup.

All the aforementioned UK Pakistani snooker players have made their respective families proud and can earn further glory.

Faisal has creative experience in the fusion of media and communication and research which increase awareness of global issues in post-conflict, emerging and democratic societies. His life motto is: "persevere, for success is near..."
Netizens ecstatic over Zidane Iqbal’s Manchester United Debut
Rohit Sharma replaced by Priyank Panchal against South Africa