Koshilya Devi, a Mandana painter has struggled to preserve the traditional art as it is becoming less visible in Rajasthan. DESIblitz explores this change.

Although the art has almost disappeared, the designs and paintings still carry significance.

Koshilya Devi, 68, has been struggling to preserve the traditional Mandana Paintings which are seen on rural houses in Rajasthan.

Houses, walls and floors would typically be painted in a Rajasthani household with Mandana style designs.

However, over the last two decades the art has almost vanished.

Devi explains that although she wants to keep the art alive, the decrease in the traditional designs is due to the influx in the number of concrete houses.

Earlier in parts of North India, Mandana drawings were used to mark the beginning of an auspicious events. It was also used to ward off the evil eye and a good luck charm.

This would include both religious and social events, however modernisation has taken over the cultural significance of the drawings.

The 68-year-old from, Baran City who has painted over hundred Mandana style designs said:

“The art is typically passed on from mother to daughter and uses white khariya or chalk solution and geru or red ochre. They use twigs to draw on the floors and walls of their houses, which are first plastered with clay mixed with cowdung,” 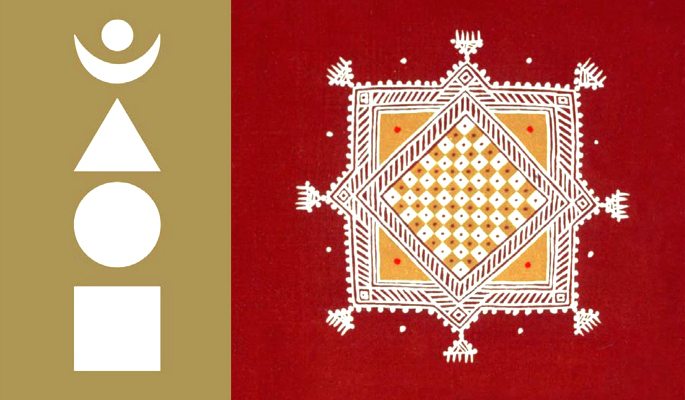 Furthermore, Maya Chaudhary a local who migrated from a village to Jaipur, ten years ago stated:

“Earlier, the mandanas wall paintings done on various festive occasions were a common sight. But over the last few years the mandana as symbolic visual art of festive and religious occasions has almost disappeared, more so on the occasion of Raksha Bandhan. It used to be the part of Indian culture, more so in Rajasthan in the early nineties,”

Devi, has drawn over one hundred styles of Mandana designs on hard boards with oil paint.

In addition, the talented artist claims that she knows 600 Mandana forms of drawings.

Her son, Jitendra Kumar who is also convener of Intach, Baran says that his mother has pioneered forty new designs;

“Tawaya, Tailghani, Tangi Khan Gavya are among those 40 forms that she has developed. She has also applied for a copyright last month,”

The convener of Intach, further added:

“The Delhi chapter of Intach in recognition of Devi’s creativity awarded her Rs 10,000 which she spent in conservation works of Mandana,”

The word ‘Mandan’ is derived from Sanskrit meaning decoration and beautification. The paintings, are therefore inspired from this word, including the use of different shapes to decorate houses.

Despite Devi’s concerns about preserving the art in India, the painter recently gave a seven-day training course to a German visitor.

The German visitor wanted to learn from Koshilya Devi in order to teach people the art in her country.

It seems that the artist is making efforts to ensure the art doesn’t fade out by going global!

Images courtesy of www.hindustantimes.com and www.mithiart.wordpress.com