Race and gender in comic books are widely debated all over the Internet. In this exclusive interview, Big Punch Studios talk about diversity and more.

"Write a good character, then make them female"

When it comes to comic books, the debate surrounding race and gender is huge.

The sheer lack of representation of women and people of colour within the stories is widely criticised.

For the most part, when you look at big companies like Marvel, they are paving the way to make their comics more representative. Look at the young Pakistani superhero Kamala Khan for instance. But Marvel movies themselves have a long way to go.

Indie comic book group, Big Punch Studios (BPS), are one of note in terms of representation. BPS is made up of Lucy Brown, Jon Lock, Alice White and Nich Angell. The entire BPS team are passionate about creating diverse and dynamic stories.

Between the four they have produced the independent comic book series 7STRING and Afterlife Inc. Alongside this, they’ve also created a game, Sandwhich Masters.

This creative group have inspired and wowed many, with their independent projects alongside their collaborative works.

In an exclusive interview with DESIblitz, Big Punch Studios discuss race and gender in comic books, alongside their biggest influences and how they have successfully created a multiverse.

Who are your biggest influences when it comes to creating comics?

We all bring various influences from so many different places; it’s one of the biggest strengths of working collaboratively.

Nich is a mega fan of the French comicker Moebius and battle manga, and Jon rounds it all off with a huge nod to the work of Grant Morrison and Warren Ellis, and a lifelong love of superheroes and the weirder side of comics!

Are there any challenges that your team has faced with joining the worlds of 7STRING and Afterlife Inc. and creating a multiverse?

Absolutely! So many challenges! 7STRING and Afterlife Inc. were created as very distinct worlds.

In fact, back when we created these comics, Jon and Nich didn’t know each other at all! One of the first hurdles to overcome was that of letting go.

When you put your all into creating a world of characters and stories it feels a little like it’s your baby! But when we realised that our stories could only become stronger by joining up we knew it was right!

After that, the challenges were more of a narrative and setting nature, the kind of challenges Jon and Nich love.

Although some parts of the stories were harder to knit together than others, it actually all happened rather effortlessly and awesomely!

It was such a fun project and we’re constantly thinking of new ways to do something like it again. 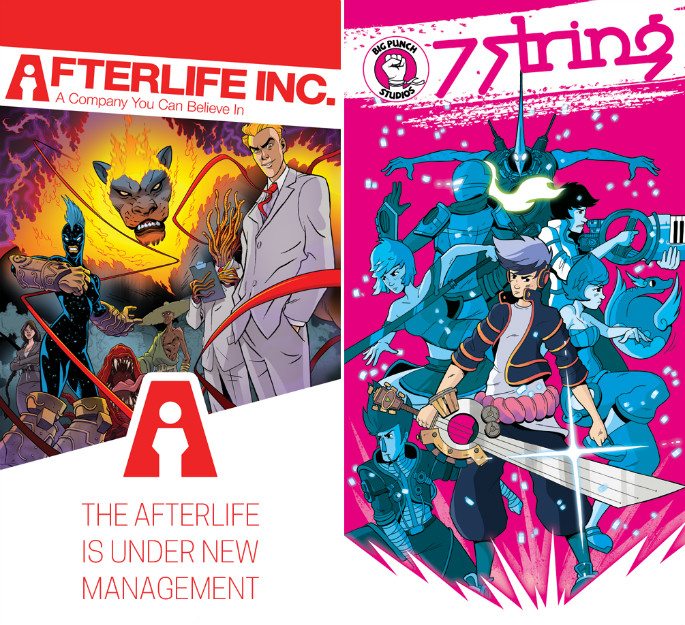 How conscious of race and gender are you when creating characters?

A big part of the Big Punch mission statement is inclusivity. We don’t want anyone to feel as though they are excluded or not represented by our heroes and stories.

That said, we find that we tend to achieve this quite naturally, without having to consciously consider it when putting stories or worlds together.

After we finished the first issue of BPM (our quarterly comics magazine with five ongoing stories every issue), we looked back on our characters and realised how diverse our casts were, both racially and by gender!

Cuckoos has the biggest mix, with characters’ appearances hailing from all around the globe. Orb’s heroines are a young black girl in 1960s New York and an elderly super-powered woman.

99 Swords features an ace male/female duo as its heroes, and The Wall has a cast that is predominantly women, with a variety of skin tones, alongside a couple of token blokes!

Cat & Meringue stars a feline and a pudding, which is also pretty diverse.

Are there any South Asian characters in your comics?

Our comics tend not to take place in reality as we know it, which is to say they are mostly set in other universes. So to say that any character hails directly from South Asia would be untrue.

But we certainly model the looks of our characters on the nations of our world. In Cuckoos, the fun-loving, pirate-esque pilot of the ship, Galliard, was designed to look as though of Indian descent. 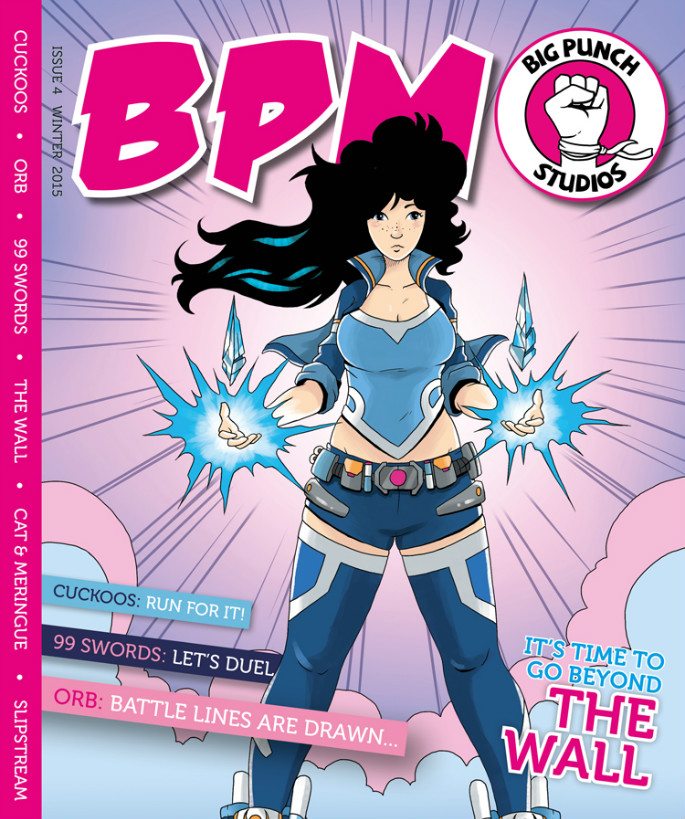 Is it important to have a diverse cast?

We think so. The world is becoming a more varied mix of cultures every day and its awesome!

We believe that we could be better humans if some of our ingrained feelings of ‘us and them’ were eliminated by people coming together. Then, it doesn’t matter if someone is Indian, African, English or Chinese, we’re all just people, getting along.

Stories and entertainment play a big role in this, as they are often the lens through which people view the rest of the world. A story can shape your perception of a person, or a people, based on whether or not it asks you to sympathise with them or dislike them.

If a story’s cast features a happy mix of creeds and colours, then the lessons learnt from those stories can’t help but feed into the real world. Sometimes it’s just a drop in the ocean, but in time this can only lead to changing minds and attitude, subtly, for the better.

Is there a process that goes into creating well-written female characters?

Write a good character, then make them female.

Unless the gender of your character is in some way central to their actions – say, for example, that the character is directly responding to the gender-norms of their society – it really can be as simple as that.

Ultimately, even if you can’t sympathise with your character because their background, life experiences and challenges are so wildly different to your own, empathise with them, feel their hopes and fears and dreams.

We’re all human at the end of the day. Regardless of race, gender or background, when you really get down to it we’re not that different.

If that truly were the case we’d never consume any type of fiction that didn’t feature protagonists who were mirror images of ourselves! We like living life in other people’s shoes. It’s the whole point of fiction. 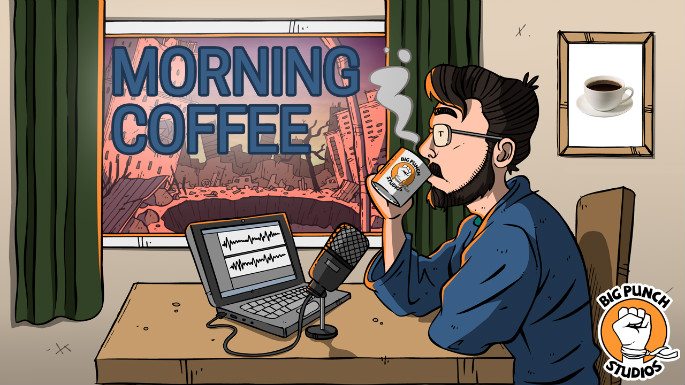 What are your thoughts on how women have been portrayed in comic books over the years?

It’s not great, is it? Regardless of how far we may have come as an industry, we’re still living in the shadows of Western comics’ origins in superhero stories of the early 20th century.

Because these comics were always thought of as targeting young boys, women were often portrayed in more of a titillating context, rather than one of true power or significance.

That’s a shame but its just how it used to be, and since then comics, particularly in the indie scene, have done a lot to improve upon or rectify these old habits. At most conventions in the UK there’s actually a greater proportion of female creators to men, which has to have some effect on the industry!

Progress has definitely been made, but it’s not to say that there aren’t still problems, particularly in mainstream comics. One particular biggest issue is that so few female comic book characters (in the superhero world at least) are entirely their own thing.

Most are just distaff counterparts of an established here: a male character with added cleavage and a name ending in ‘girl’. So think ‘Amazing Girl’ vs. ‘Amazing Man’ or ‘Stupendous Woman’ vs. ‘Captain Stupendous’. There’s clearly a need, and a desire, for female heroes in control of their own name and destiny.

Are there any challenges when creating characters of different races? Are cultural differences taken into account?

Again, most of our stories take place in fantasy worlds, therefore the cultural differences are whatever we say they are!

However, the race of the main characters in Orb was a deliberate choice. Orb is set in an alternate 1960s New York, a time when, in our world, African-Americans were often impoverished and disenfranchised.

Anna and her family are clearly well-off and middle class, with a nice house and car, and equal standing in society, highlighting the differences between our world and theirs.

We try to keep it subtle, however – after all, Anna, given her age and the timeline of this world, has never known otherwise – but race, and the changes to this version of the 20th century, are very important to the great storyline. 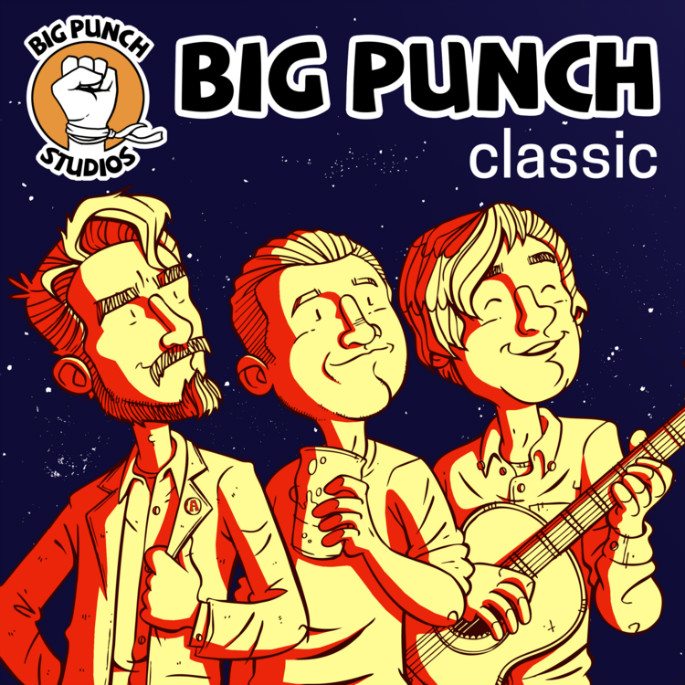 We think so. The demand for diversity is growing, and comics are, after all, a business. The industry has to respond to the changing demands of its audience.

Or maybe that audience has always been there but they’re only now finding the voice to express themselves!

The idea that the only people reading comics are prepubescent boys is finally working its way out of the system (a good 30 years late, but hey…).

As a result, we’re seeing greater diversity in gender, race and sexuality, but also just in the types of stories that can be told.

Comics are more than just superheroes now, just look at titles such as Locke and Key, Atomic Robo and The Wicked and the Divine, some of our favourites.

It is clear that Big Punch Studios are promoting an inclusive and open-minded approach to comics and diversity.