Many young women are taking to Mixed Martial Arts in Pakistan. We present 6 Pakistani female MMA fighters that are turning heads.

"I’m keeping my head in the sky, feet on the ground"

With Pakistan becoming a hot spot for Mixed Martial Arts, female Pakistani MMA fighters are showing their grit and determination.

Many of these fighters come from different parts of Pakistan, reflecting a sense of national pride.

Anita Karim made the limelight as the first notable female fighter to emerge from the northern areas of Pakistan.

Talking to Zalmi TV, Munawar Sultana another fighter is encouraging others, as well as being happy women are taking up the sport:

“Women should come forward in MMA. It’s good that women are coming toward this side, showing their strength and courage. They should present their qualities.”

We showcase 6 female Pakistani MMA fighters that have made big strides in the sport. 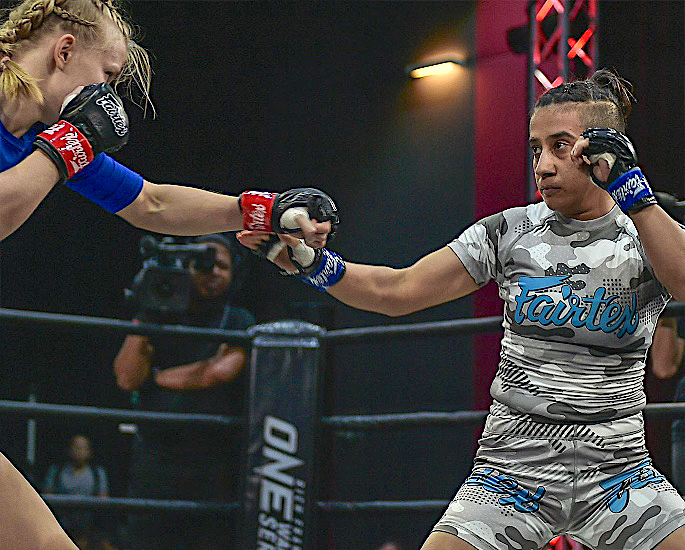 Anita Karim is one of the most prominent female Pakistani MMA fighters. Famous as ‘The Arm Collector’, she was born in Karimabad, Hunza Valley, Pakistan on October 2, 1996.

She comes from an MMA fighting family. Her brothers Uloomi Karim Shaheen, Ehtesham Karim, and Ali Sultan are founders of “Fight Fortress”, an MMA Gym.

She is twice a Brazillian Ju-Jitsu champion at the national level.

On February 28, 2019, she won the ONE Warrior Series (OWS), defeating Gita Suharsono from Indonesia.

On February 19, 2020, she beat Marie Rummer of Estonia in ONE Warrior Series, courtesy of a unanimous decision.

The atomweight category fight took place in Singapore as part of the ONE Championship.

For this fight, Anita was representing Team Fight Fortress (TFF), along with Fairtex Gym. Anita’s brother Shaheen was her coach for this fight.

Speaking exclusively to DESIblitz about how she felt after the fight, Anita said:

“It was great but it’s just the beginning. I know I have a long way to go. So, I’m keeping my head in the sky, feet on the ground and keep on training.”

Anita was the first female fighter to emerge from Pakistan, giving her the limelight in the country. 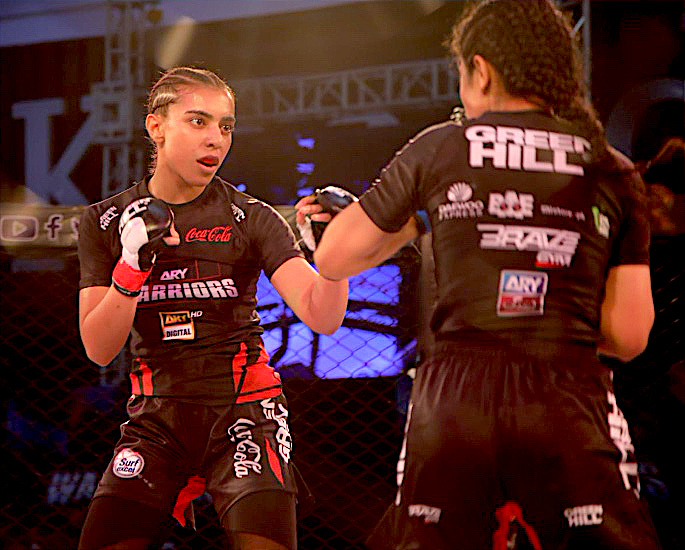 Eman is amongst the most talented female Pakistani MMA fighters around. Known as the ‘Falcon’, Eman is from ‘The City of Lights’, Karachi.

She has an orthodox stance, with a kickboxing style. Eman’s kicks are one of her key strengths. Her height is 5ft 5”, along with a reach of 65.5”.

For her first three round flyweight bout, she was a member of the K7 Kickboxing Academy team.

Eman was quite dominant, winning her debut fight in August 2021 against Shehzadi Sakhi also from Pakistan. The fight was part of the ARY Warriors competition.

Speaking On the Mic, Eman spoke about how she was feeling before the fight:

“I had a lot of confidence. I think personally I have this fight mindset for a long time.”

“So, it was not hard for me to get into that zone. The fact that it materialised was a big relief.”

She threw quite a bit of low kicks in the fight and then began focusing on boxing. She took her opponent down in the second round,

When Eman went down again with her opponent, she used the rear-naked choke, executed to perfection.

Eman admits she has had to train with male fighters by and large, with some women “scattered” around too. She is always very sharp when undergoing intense training.

Eman has never been one to shy away from her opponents. 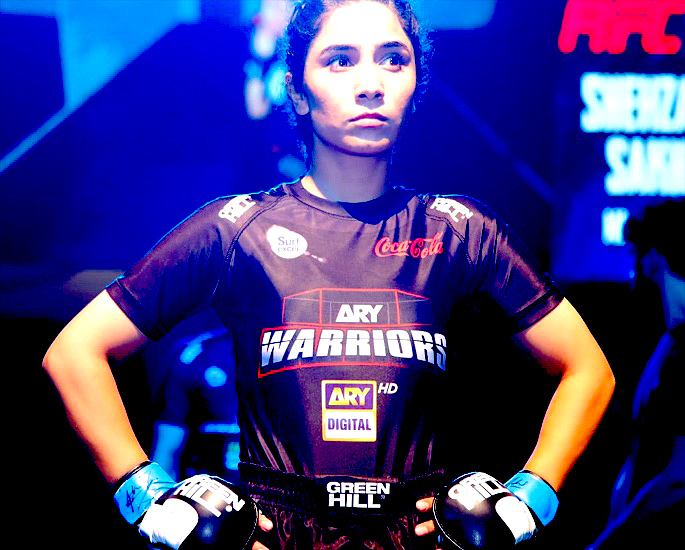 Shehzadi Sakhi is yet another gifted Pakistani female MMA fighter. Her home city is Danyore in Gilgit-Baltistan, Pakistan.

Specialising in the wushu style of Chinese martial arts, Shehzadi also has an orthodox stance. She has a relatively decent height of 5ft 4” as well as a 64” reach.

She made her MMA debut at the ARY Warriors event, falling short to Eman Khan in the second round of their flyweight clash.

Representing Brave Gym and Team RFC, Shehzadi was in the best of spirits, despite losing to a submission.

Throughout the fight, particularly at the finish, both fighters had shown true sportsmanship.

Shehzadi has won medals in various other competitions, prior to her first MMA fight. 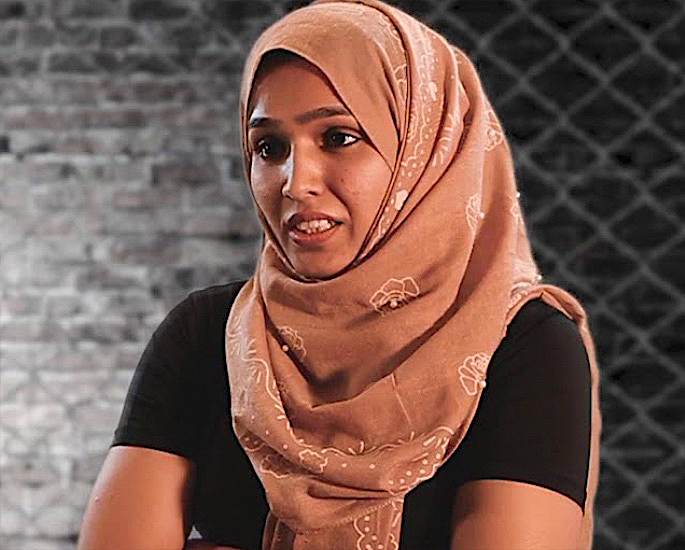 Munawar Sultana is one of the best female Pakistani MMA fighters and an advocate during the day. She has built a reputation for herself in MMA.

Sultana belongs to the historic city of Lahore in Pakistan. She had an interest in MMA from an early age but began much later in February 20218.

After completing law, she had somewhat freedom to pursue the sport, especially with the backup of her brother Usman.

Munawar talks of her entry into the sport, mentioning:

“When I was a kid, I wanted to learn karate and I never really had an idea about MMA.

“My brother told me to join a club for self-defense but that place didn’t help me as such. I joined another gym and that’s where my MMA journey began.

“I completed my law degree first and then I joined martial arts, but I make sure that I maintain a balance.

She continues to talk about her juggling law and MMA:

“I’m a Lawyer by day and in the evening I do my training.”

“Advocacy is a full-time job, but whichever law firm I used to work at, I informed them beforehand that I won’t be able to work after 4 pm because I have to do my MMA Training afterward.”

Her coach Irfan Ahmed gave her a lot of confidence. One of her early inspirations was American MMA artist Ronda Rousey.

She was victorious in her debut fight versus Farheen Khan at the Serai Fight Night (SFN). The thee round cage fight took place in Islamabad in August 2021.

The most impressive aspect of her unanimous decision win was that she only had eighteen days to prepare for it. 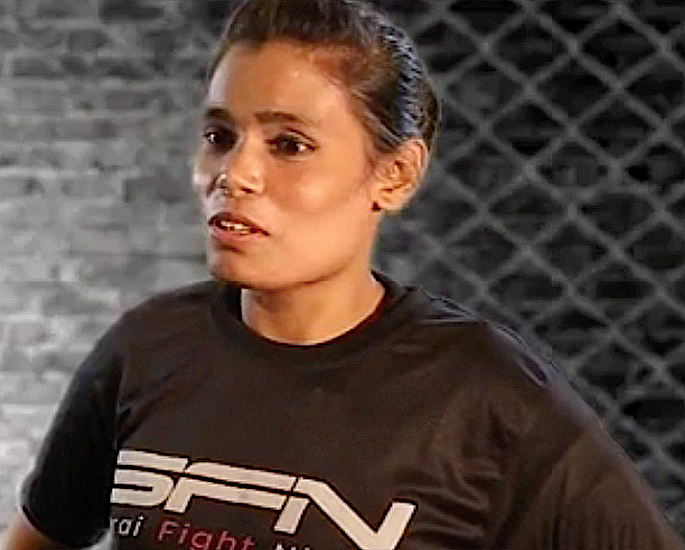 Farheen Khan is a Pakistani female MMA fighter who comes from Karachi. She has been involved in the sport since 2018.

Farheen is also a taekwondo player, having previously won national gold in it, representing the Army team.

She got into MMA, after watching a lot of Chinese movies, which feature some of the greats in martial arts.

Over the years, Farheen has received a lot of support from family and friends. Though, whenever she had an injury her mother would have concerns.

On August 3, 2019, she had a flyweight category fight versus Munawar Sultana. The cage contest was part of SFN, taking place at Serai Bistro, Diplomatic Enclave, Islamabad.

Farheen took Sultana to the distance, but the judges gave a unanimous decision in favour of the latter.

Farheen was representing the Bushi Ban Fighter’s Den, with Sultana part of the Rogue MMA team. 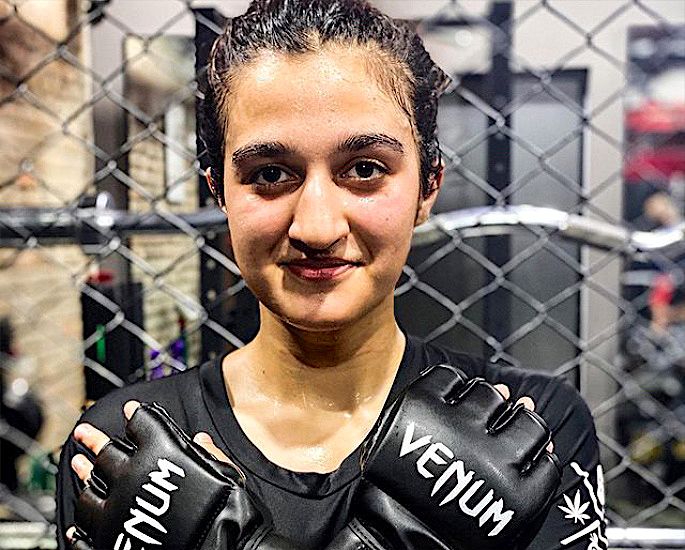 Saria Khan is one of the most exciting female Pakistani MMA fighters. She originally comes from Kashmir, Pakistan.

In September 2021, Saria will have made her MMA debut under the Spark MMA Management event.

Like Anita, Saria also has an affiliation with Team Fight Fortress. She has been coached by the likes of Ehtisham Karim.

Even MMA fighter and coach Raja Haider Satti has helped Saria with fixing her basic combinations.

Saria takes her training very seriously, often sweating it out. She is also known to really dig in deep during Brazilian Ju-Jitsu classes. Saria’s dreams have always been to win medals for her country.

All the above fighters are confident and proving a point that women can compete like their male Pakistani MMA fighters.

As the sport continues to grow, there is a wide scope for female MMA fighters in Pakistan. Confidence comes from family support and a sense of belief to conquer.

The aforementioned Pakistani female MMA fighters are inspiring and empowering others, along with training beginners.

With the platform being there, Pakistan has the potential to keep nurturing future talent, hopefully producing world champions.