Wrestling Stars to ‘Rumble in Pakistan’ 2019

For the first time ever, Pakistani talent will battle against International superstars at the 2019 ‘Rumble in Pakistan’ wrestling event. DESIblitz previews.

"the night will end with me retaining my championship."

Pro Wrestling Federation Pakistan (PWFP) in collaboration with Dreamworld Resort, Hotel and Golf Course are hosting the ‘Rumble in Pakistan’ competition in the ‘City of Lights,’ Karachi on Sunday, April 28, 2019.

Talent from Pakistan will compete against International superstars in three huge matches. To participate in ‘Rumble in Pakistan,’ wrestlers travel from the USA, Mexico, Puerto Rico and Russia.

Ultimate Champion Raja Naveed will be flying the flag for Pakistan.

Wrestling fans from Pakistan have a chance to witness all the action LIVE, as opposed to watching on TV.

“Events like these are imperative to revive the sport of wrestling in Pakistan.

“It will provide a much-needed exposure to Pakistani wrestlers necessary for them to represent Pakistan in the international matches in the near future.” 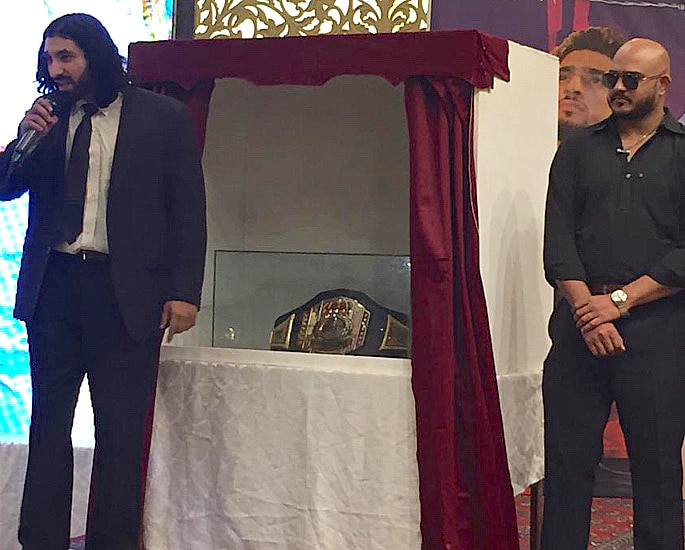 The organisers hope to bring back the glory of the 70s when the likes of the Great Gama and the Bholu brothers fought on the sand and was watched by many.

Besides wrestling being a traditionally wonderful sport, it can also encourage healthy activity amongst young people.

“We are sure that like PSL, ‘Rumble In Pakistan’ will not only elevate the positive image of our country but also open doors for future international events for our sports-loving public.”

‘Rumble in Pakistan’ aims to promote Pakistan in a positive light and show the country is capable of hosting foreign athletes The organisers have the support and assurances of the government.

Let’s take a closer look at the five main wrestlers participating in this event: 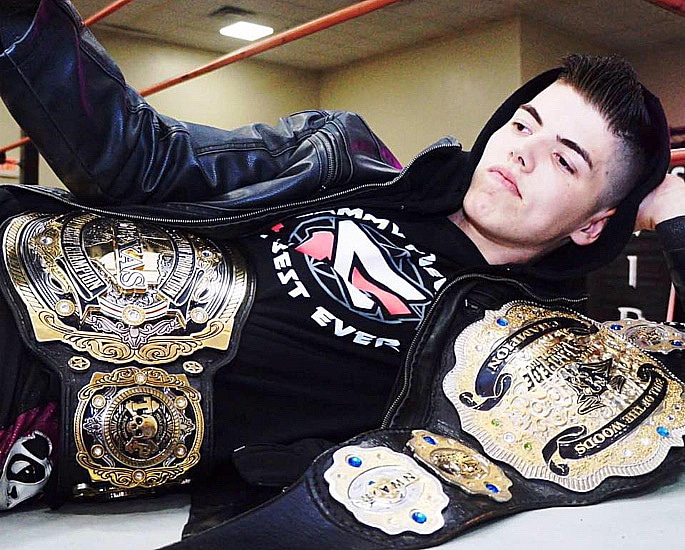 Sammy Guevara is a young professional wrestler from the USA. He made his debut in 2013 under the Independent Circuit.

Between 2017-2019, he was participating under the Major League Wrestling promotion. His big success came in 2018 when he won the AAA World Cruiserweight Championship title.

Samy was named as a roster member for All Elite Wrestling (AEW) founded by Shahid Khan on February 7, 2019. Through a video message, challenging his opponent, Sammy said:

“You are going to see me take on Raja Naveed for the Pakistan Ultimate Championship.

“April 28th is going to be the day that Sammy Guevara becomes the Pro Wrestling Pakistan Ultimate Champion.” 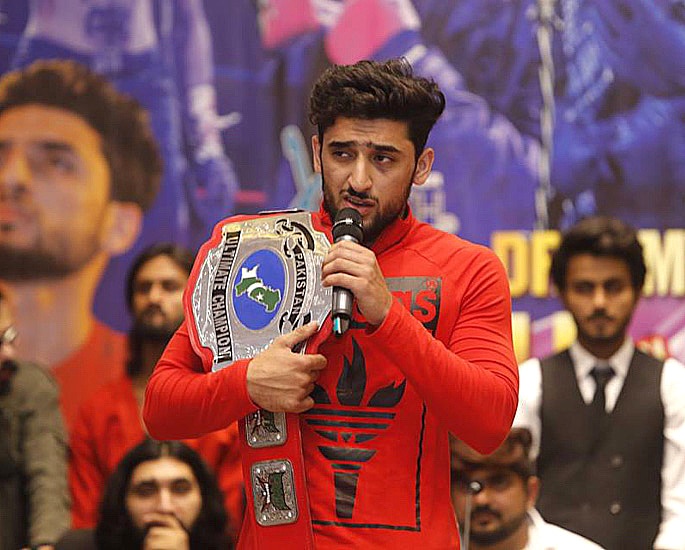 Raja Naveed is the defending PWFP Ultimate Champion from Karachi, Pakistan. From a very young age, Raja wanted to be a wrestler and has been wrestling since 2016.

Speaking about the dangers of the sport, Raja told ARY News:

“When we talk about wrestling, it is a very dangerous sport. Even the slightest mistake can take your life. You can get paralysed or have some injury.”

Raja feels with the platform that PWF are giving, there is scope for wrestling in Pakistan.

Accepting the challenge given to him by Sammy Guevara, Raja said:

“Sammy, mark my words, you are coming to Pakistan, is just because of me.”

“And you are having this championship opportunity also just because of me.

“So, Sammy do not think you will be the next PWFP Ultimate Champion. Because the night will end with me retaining my championship.” 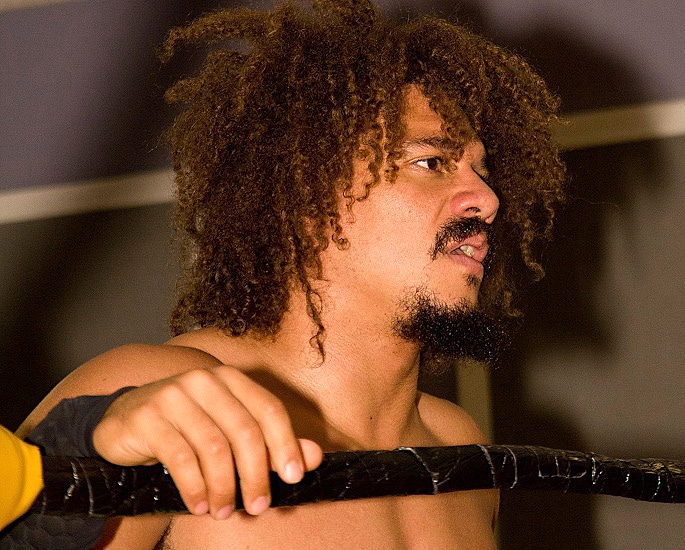 Carlos Colon Jr,  familiar as ‘Carlito,’ is a Peurto Rican wrestler who resides in the USA.

Carlito made his debut in January 2000 for his father’s promotion World Wrestling Council (WWC).

From 2003 to 2010 he worked for World Wrestling Entertainment under a development contract.

Carlito is the former WWE United States and Intercontinental Champion.

Watch video highlights of Carlito in action and his message here: 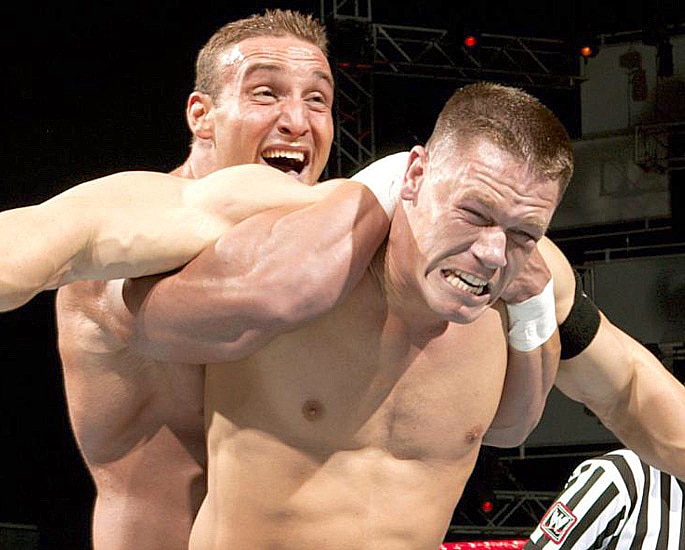 Chris Masters, familiar under the ring name ‘Chris Adonis,’ is a WWE and Impact superstar. He is also participating in the Pakistan competition.

At the age of sixteen, he began his career with the Ultimate Pro Wrestling promotion.

He has many years of experience on the Independent Circuit, along with exposure to WWE and Impact wrestling. 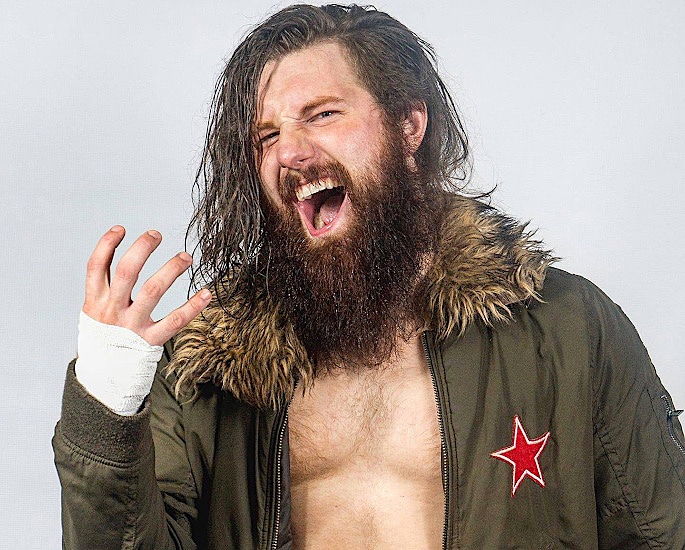 Dimitri Alexandrov is a freelance wrestler of Russian descent.

Going by the nicknames, ‘The Russian Renegade’ and ‘The Siberian Savior’ Dmitri made his in-ring debut in 2015.

He has won several titles under the Ultimate Wrestling Entertainment (UWE) promotion. Sending a video message about the event, Dimitri said:

“This event is going to be very special.”

This is going to be the first event in the history of Pakistan to feature wrestlers from Pakistan. Born and raised, trained in Pakistan.”

Besides, the Ultimate Championship match, there will be a thirty men Royal Rumble, along with other exciting and passionate games.

Other local wrestlers to feature in the competition include the first-ever ultimate world champion Of PWFP, Jordan and Albert Leo.

Furthermore, with the event generating attracting a lot of attention, Pakistan celebrities such as national cricket captain Sarfraz Ahmed are endorsing it.

Whilst Sarfraz himself will not be present due to being in England, there is certainly the possibility of other Pakistani stars attending.

Fans too are looking forward to this event, with some getting hold of tickets and passes.

The event will be held at Dreamworld Resort, Hotel and Golf Course in Karachi on April 28, 2019. The event kicks off at 5:00 pm (Pakistan Subject Time).

Organisers are hoping this will be a histoy making event, paving the way for more wrestling stars to visit Pakistan in the future.

Is Amir Khan going to Quit or Fight Again?
Mohd Shami’s Wife arrested after Argument at Her In-Laws