Mohd Shami’s Wife arrested after Argument at Her In-Laws

Hasan Jahan the estranged wife of Indian cricketer Mohd Shami was arrested by police for a major argument she had at her in-laws.

""My in-laws are misbehaving with me and the police is supporting them."

Cricketer Mohd Shami’s estranged wife Hasin Jahan was arrested by police in the early hours of Monday, April 29, 2019, in Amroha in Uttar Pradesh, after she barged into her husband’s house and got into a heated argument with her mother-in-law.

Haseen Jahan arrived at Shami’s house in Sahaspur Ali Nagar village on Sunday night at about 7 pm to retrieve some of her clothes, jewellery and furniture that she had bought with Shami.

When she started to create a scene, her in-laws then asked her to leave. However, she then locked herself and her child in a room, defying their request.

After a complaint to police by Shami’s mother, police officers from Didauli police station arrived at the house.

After the police tried to calm things down between the two parties, which did not work, they arrested Jahan at about 12.15 am on Monday morning.

Jahan was arrested for trespassing as accused by Shami’s mother.

Jahan was taken to a hospital during the night and was not given bail until later on in the morning.

As she was arrested, Jahan said:

“I have come to my husband’s house and I have every right to stay here.

“My in-laws are misbehaving with me and the police is supporting them.

“They should have arrested them but they are taking me to the police station.” 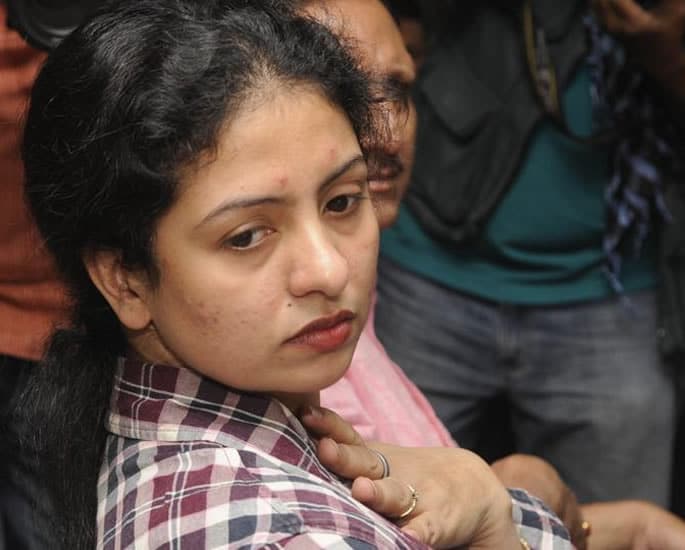 Then she gave her side of the story after her bail, saying:

“I had the keys and entered my room. My in-laws started shouting at me and even called the cops.

“I told them that this section of the house was built by Shami and as his legally wed wife I had the right to stay there.

“Then a little after midnight, cops banged at the door and entered my room and forcibly took me with them.

“I was in my nightgown and requested them to let me change. When I tried to contact my lawyer, they snatched my phone.”

“I was sleeping in my room at my in-law’s place when cops forced entry in my room and dragged me out.

“The cops also pulled my infant daughter from the bed and took her along.

“We were first taken to the police station and then were sent to a hospital under police siege.

“I was not allowed to speak to my lawyer or relatives for a long time.

“We were not offered any food or water and more than 10 hours later I was granted bail.”

After getting her bail she asked the police to let her go back to her in-laws’ house. However, police did not allow it. She said:

“But cops threatened me to not to go there and I was forced to take shelter at a relative’s place.”

There was no comment from Mohd Shami or his family on the matter. Sham is currently playing in the 12th Indian Premier League (IPL) tournament as a member of the Kings XI Punjab team.

Nazhat is an ambitious 'Desi' woman with interests in news and lifestyle. As a writer with a determined journalistic flair, she firmly believes in the motto "an investment in knowledge pays the best interest," by Benjamin Franklin.
Wrestling Stars to ‘Rumble in Pakistan’ 2019
Inaugural Indo International Premier Kabaddi League 2019