Cricketer Mohd. Shami accused of Cheating and Torture by Wife

India’s fast bowler Mohammed Shami has allegedly been accused of cheating and torture by his wife Hasin Jahan, who claims that he had been having extra-marital affairs.

"Everyone in their family used to torture me. His mother and brother used to abuse me"

Hasin Jahan the wife of star India fast bowler Mohammed Shami, has allegedly accused her husband of torture and having extra-marital affairs.

On Tuesday 6th March 2018, the 27-year-old woman, posted numerous screenshot’s on her Facebook account, that discloses Mohd. Shami’s alleged WhatsApp and Facebook conversations with multiple women, before lodging a complaint with the police at Lalbazar police headquarters.

She even uploaded photos and phone numbers, of the women involved and claimed that his family members had tried to kill her. In a statement, she said:

“Everyone in their family used to torture me. His mother and brother used to abuse me. The tortures continued till 2-3 am in the morning. They even wanted to kill me.”

She even stated that he had physically assaulted her, after returning from the South Africa tour last month and claims that the alleged abuse has been going on for some time now.

She explained to NDTV:

“Shami abused me and started beating me even after returning from South Africa. He has been doing this for quite some time now and now I have had enough.”

“I gave him enough time (to rectify mistakes) and tried to calm myself down but instead of accepting his own mistakes, he used to vent his anger on me and even threaten me, asking to keep mum for my own goodwill.”

Hasin Jahan told ABP News: “I tried to convince myself for the sake of my family and daughter, but he kept on harassing me and when I found those obscene chats with multiple women, all hell broke. I cannot tolerate this anymore.”

However, Mohammed Shami denies all allegations and calls this a conspiracy and an attempt to damage his reputation.

He expressed, how he is unaware of why his wife is making these accusations. The Indian pacer added:

“Everyone knows the relationship I’ve shared with my family, how happy I was. And it’s not as if I’m the only one who knows how my relationship with my wife is, even in South Africa she demanded to go shopping and I took her even though I was with the selectors at that time.” 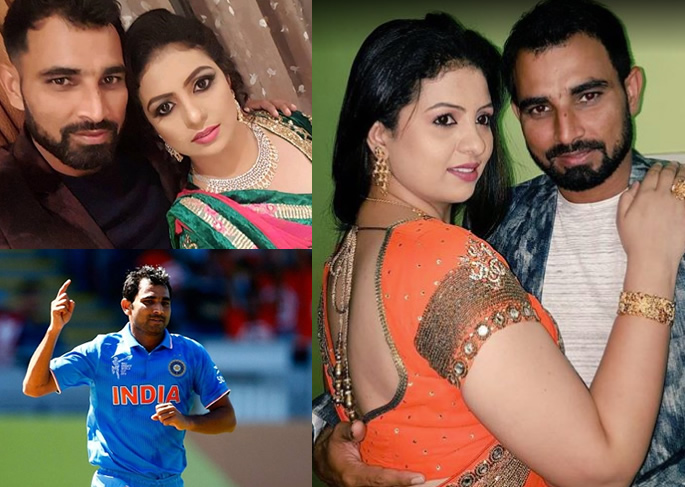 Shami told ANI, as quoted by the Times Now:

“Everything was fine. Even after returning we went shopping, we bought jewellery. We celebrated Holi. I don’t know what has happened suddenly. I’ll let you all know as soon as I find out.”

He tweeted that the rumours about his personal life are lies against him:

Shami believes that the accusations made against him are baseless. He revealed that he has only been married for 4 years after his wife claimed to have been abused for five years.

“If this [the abuse] has been happening since five years then why did it come out now’ Why did it take five years for it to come out.”

The Board of Control for Cricket India (BCCI) have taken action by deciding to withhold Mo Shami’s name from the list of contracted players in 2017/18 cricket, following the series of allegations made by the bowler’s wife.

Mohd. Shami is currently playing in the Deodhar Trophy for India A. The cricket player has represented India in 30 tests, 7 T20Is and 50 ODIs.

Mehrunnisa is a politics and media graduate. She loves to be creative and unique. She is always open to learning new things. Her motto is: "Chase the dream, not the competition."
Ranveer Singh reveals Arsenal Love at India’s Premier League Event
Wife says Mohd. Shami involved in Sex Racket and Match Fixing