A Dubai-based woman has accused Pakistani cricketer Shadab Khan of blackmailing her. She revealed the allegations on social media.

"after being with me, he'd hook up with other girls."

Pakistan all-rounder Shadab Khan has been accused of blackmail after a Dubai-based woman revealed the allegations.

Ashreena Safia claimed to be Shadab’s girlfriend. She alleged that the 21-year-old has been blackmailing and cheating on her.

She went on to say that he threatened to leak her private pictures.

It is believed that he did not want their relationship going public. Instead, he allegedly forced her to pretend to be a fan of his.

She revealed that she became close friends with Shadab in March 2019 and that it developed during the 2019 Cricket World Cup.

Ashreena went on to say that she spent over $15,000 flying to different countries to be with the cricketer while he was playing.

However, she accused him of cheating on her during the tournaments.

She claimed: “I’ve spent over $15,000 US flying to different countries to be with him like CPL Guyana, Bangladesh and Dubai all of which after being with me, he’d hook up with other girls.”

Despite confronting Shadab about his alleged cheating, he would convince her not to leave him.

Ashreena stated that he began threatening her after a journalist photographed the two of them together and the picture went viral.

She alleged that he contacted her in different ways, telling her not to reveal details of their relationship. According to Ashreena, Shadab threatened to leak her nude photos if she did.

“He tried to manipulate and convince me everything was real between us so I can lie to the public by saying I’m a fan/friend because of the consequences of our relationship on his reputation.”

Ashreena revealed that the ordeal has had an effect on her family.

She also claimed that Shadab Khan did the same thing with other young women in the past.

“I’m sorry to all the girls who reached out for help when they were used and taken advantage of by the person I was with.”

Ashreena also posted screenshots of their messages which detail the threats she received. 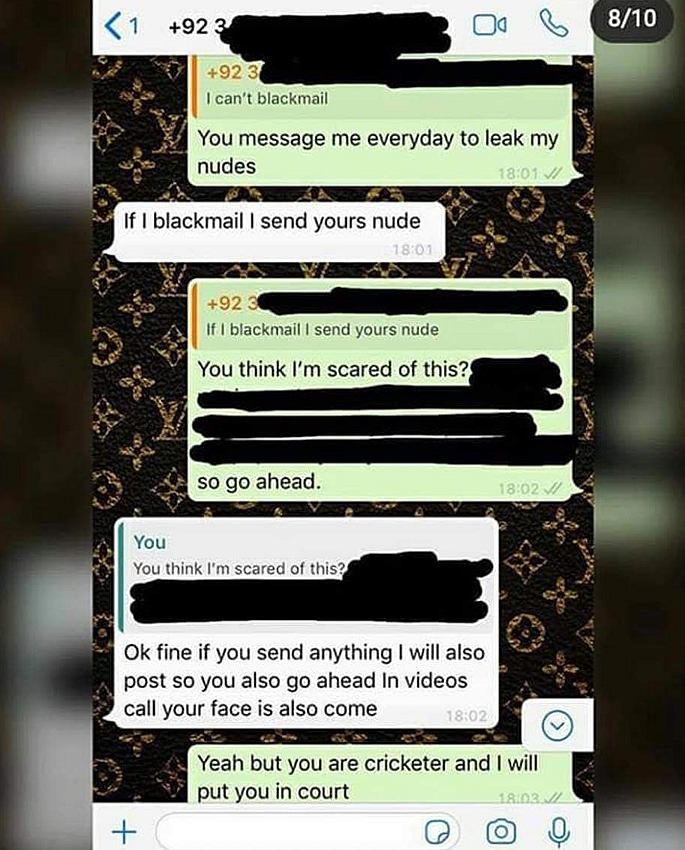 Shadab Khan is a prominent member of the Pakistan ODI and T20 teams. So far, he has played five Test matches, 43 ODIs and 40 T20s for the Pakistan national team.

He is yet to respond to the allegations against him.

Dhiren is a journalism graduate with a passion for gaming, watching films and sports. He also enjoys cooking from time to time. His motto is to “Live life one day at a time.”
Pakistani Ex-Cricketer Nasir Jamshed jailed for Spot-Fixing
Indian Buffalo Racer runs Faster than Usain Bolt?