Shahid and Tony Khan announce the creation of their new venture, All Elite Wrestling (AEW). Fans are expecting top stars at the first event in May 2019.

"AEW will launch with a roster of the top wrestlers in the world."

The world of sports entertainment is buzzing as Shahid Khan and Tony Khan create All Elite Wrestling (AEW).

The co-owners of Fulham F.C. and Jacksonville Jaguars (NFL) are hoping to create an impact in the pro-wrestling industry.

Further details of the company were revealed on January 8, 2019, at their DOUBLE or Nothing Rally.

What does the creation of AEW mean for World Wrestling Entertainment (WWE) and New Japan Pro-Wrestling (NJPW)? Along with their rivals, AEW is participating in a “signings war” to secure the hottest free agents.

Furthermore, fans are hoping to see AEW go head to head with WWE, similar to that of the “WWE-WCW Monday Night War” in the 90s. 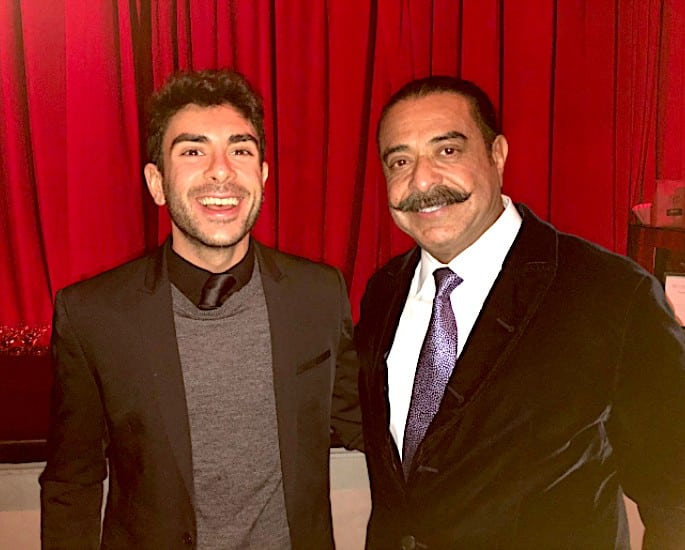 Shahid Khan is a Pakistani-American billionaire businessman with a net worth of $6.4 billion (£5 billion). He is known as the CEO of Flex-N-Gate, an automotive manufacturing company in Illinois, USA.

He is also the owner of the NFL team, the Jacksonville Jaguars and the English football team, Fulham F.C. In 2018, Shahid made the headlines after making a bid for Wembley Stadium but eventually withdrew.

His son, Tony Khan became the Senior Vice President, Football Technology and Analytics of the Jacksonville Jaguars in 2012.

In February 2017, he was appointed as Fulham F.C.’s Vice Chairman and Director of Football Operations.

On January 2, 2019, Tony was announced as the President of AEW. On January 9, 2019, Shahid released a statement declaring himself as the primary investor:

“I am the lead investor, a supporter and a backer of All Elite Wrestling, and I anticipate great things today and into the future for AEW and everyone who has worked passionately on this week’s launch.

“I know AEW will be welcomed by wrestling fans here in the U.S. and throughout the world who are ready for something new and authentic.

“AEW will work hard to deliver on that promise.”

Though unconfirmed, the wrestling news site, RAJAH, reported the Khans have made $100 million (£78.1 million) investment in the company. 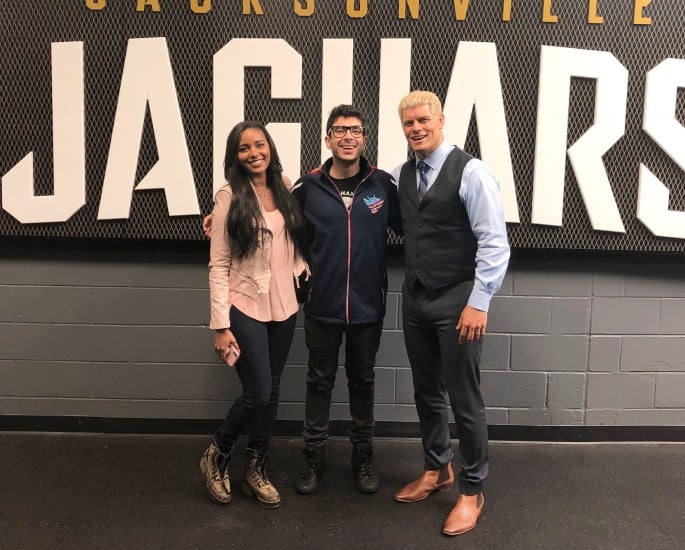 All Elite Wrestling (AEW), a Jacksonville, Florida-based promotion, was founded on November 5, 2018. It was officially announced on January 1, 2019.

Shahid Khan adds to his statement:

“As important, I am the father – the proud father – of Tony Khan, who will serve in a leadership role at AEW during the 2019 launch and in the years ahead.

“Tony will assemble a great team to take AEW over the top, for the benefit of everyone who loves the wrestling industry, while continuing to serve in his current capacities with the Jaguars and Fulham.”

AEW plans to run a weekly episodic show titled Tuesday Night Dynamite. Though television deals have yet to be confirmed.

If plans come to fruition, we could see a “Tuesday Night War” as WWE airs SmackDown Live on Tuesdays.

The Rhodes and The Young Bucks 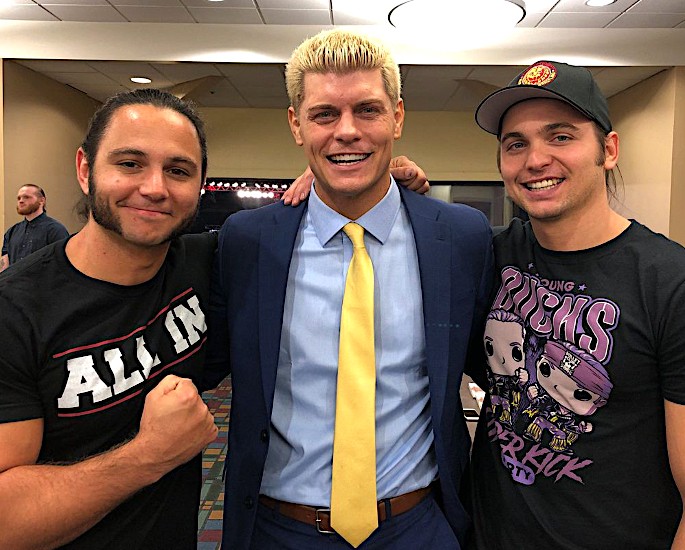 American professional wrestling promoter Cody Rhodes and The Young Bucks were instrumental in creating the highly successful All In 2018 event.

Rhodes is a former WWE Superstar and the son of the late WWE Hall of Famer, Dusty Rhodes.

Since leaving the WWE in 2016, Rhodes has been shaking up the independent wrestling scene.

He began racking up championship wins across numerous promotions like Ring of Honour and New Japan Pro-Wrestling (NJPW).

The Young Bucks are a tag team, compromising of brothers Matt and Nick Jackson. They have left their mark in tag team wrestling throughout the independent scene since 2004.

Together the three are part of the team, THE ELITE; a sub-group of the popular stable, The Bullet Club, based in NJPW.

There was speculation that they would start their own company after their Pay-Per-View, All In (2018).

It was announced on January 1, 2019, Rhodes and the Young Bucks will serve as the Executive Vice Presidents of the company.

Due to the “Women’s Evolution” occurring in the wrestling industry, Brandi promised the fans a women’s division. She ensured that the women will be paid equally to the men. Brandi said:

“We care about our women. They are top talent, so they will be paid equally. There’s no sliding scale.” 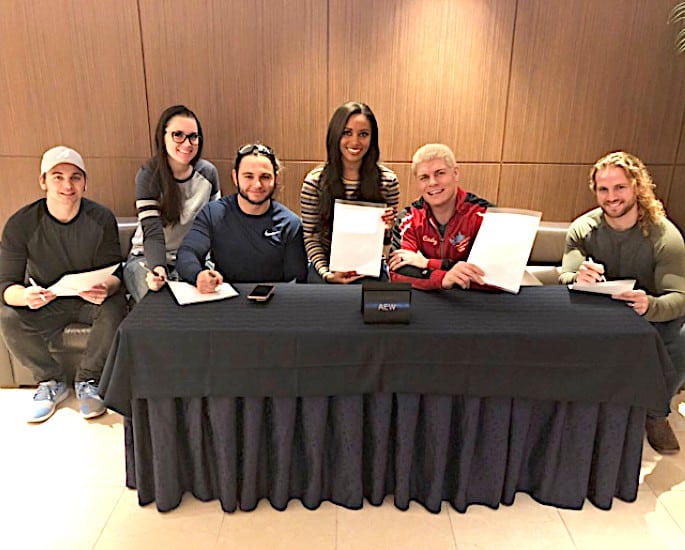 In addition to the Rhodes and the Jacksons, a few names have been added to the roster.

“AEW will launch with a roster of the top wrestlers in the world.

“While they’ll clash in what will be some of the most intense and fast-paced contests ever sanctioned in the squared circle, they’ll also share a common goal: to make this the true golden age, to make this the greatest time ever to be a wrestling fan.”

At the DOUBLE or Nothing Rally on January 8, 2019, former WWE Superstars, Chris Jericho and PAC (formerly known as “Neville” in WWE) made surprise appearances. They revealed themselves as the latest signees.

Jericho went on Instagram posting a confirmation video, captioning it:

Rumours of possible signees are floating around with the new free agent, Kenny Omega on everybody’s lips.

Interestingly, it is reported WWE officials are interested in signing Omega. He has had an acclaimed career with NJPW between 2010-2019.

Gossip sites predict Omega will be a surprise entrant in the 2019 Royal Rumble match. Though fans foresee Omega signing with AEW. This is due to his association with THE ELITE, having been the former leader of The Bullet Club.

Wrestling enthusiasts should also be aware that several members signed to WWE will have their contracts expiring in 2019. Names include Karl Anderson, Luke Gallows, A.J. Styles, Shinsuke Nakamura and Paige.

These stars may well jump ship to AEW. Despite Paige being retired, she could be involved in a corporate role. 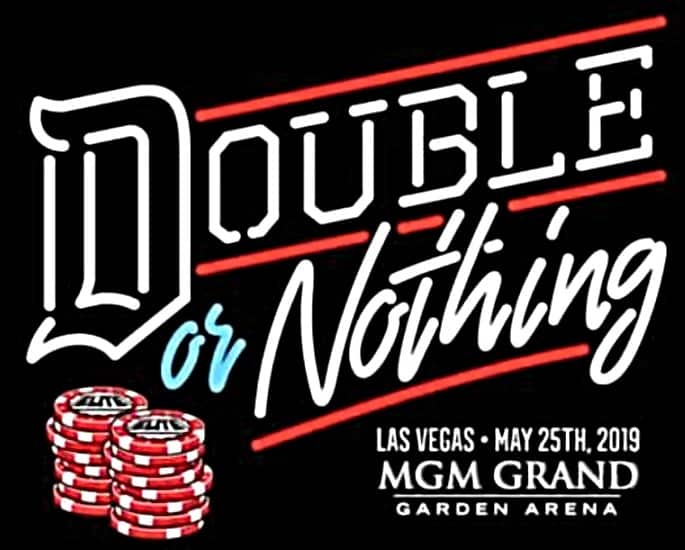 Meanwhile, a second show was announced to be held in Jacksonville, Florida. At this show, a portion of the ticket sales will benefit victims of gun violence. However, the date and venue were not revealed.

Present were Cody and Brandi Rhodes, the Young Bucks and several members of the roster including surprise appearances from PAC and Chris Jericho.

During the rally, it was revealed AEW has partnered with the Chinese wrestling promotion, Oriental Wrestling Entertainment (OWE). This partnership will allow talent to appear on both promotions along with holding inter-promotional events.

The big announcement was the date and location of DOUBLE or Nothing.

The Pay-Per-View event will be held at the MGM Grand Garden Arena in Las Vegas, Nevada, USA. It is scheduled to take place on May 25, 2019.

A live stream of the Double or Nothing Rally is available on YouTube.

With Shahid and Tony Khan providing a new alternative and competition, to WWE and NJPW, fans can expect great things.

The father and son have managed to sign some of the industry’s top stars. All Elite Wrestling will send shockwaves throughout the sport.