A gang has been imprisoned for committing a jewellery raid on a jewellery shop in Newcastle. They stole £300,000 worth of items.

Five members of a gang have been jailed for a total of 49 and a half years for carrying out a jewellery raid in Newcastle worth £300,000.

They targeted the family-run Sunny Jewellers in the West End of Newcastle and drove several hours to get there.

Manchester Minshull Street Crown Court heard that Ali Askhor, aged 19, from Oldham, posed as an innocent customer to gain access to the shop in May 2018.

He then held the door for the others who were armed with sledgehammers and wearing gloves.

The court was told that the raiders were identified as 20-year-old Usman Khan, Shahzad Farooq, aged 21, and another unidentified man.

The shop’s smoke alarms were triggered before the men left in a black Audi S5. As the shop owner tried to stop the gang, one lifted a sledgehammer above his head which allowed them to flee.

The ordeal left the shopkeeper and his wife badly shaken.

Mr Gollinski read out a victim impact statement which stated that the shopkeepers feared they would be killed.

“He and his wife have lost wages in the region of £25,000 as the shop had to be closed for 46 days and his insurance premiums have increased significantly.

“The robbery has had an incredible impact on him and his wife and they now live in constant fear.

“He says that even going to the bank or depositing money makes him extremely nervous.

“He says he is still in shock seven months later and expects to be for the rest of his life.”

Detectives began tracing the thieves but their efforts were unsuccessful as the gang had switched to a BMW X5 minutes after the heist.

Samantha Farrell-Blake, aged 44, from Birmingham, was driving the second car and had been ‘recruited’ as a getaway driver.

Shah Almaruf, aged 23, of Oldham, drove back to Newcastle a few days after the robbery to collect the Audi.

The investigation had a breakthrough when a member of the public reported an abandoned vehicle in Oldham and said she had recognised the driver.

It turned out to be the Audi used in the heist. The gang members were able to be traced and they were arrested.

Khan, Almaruf and Askhor admitted their role. Farrell-Blake and Farooq were found guilty after a trial. However, the jewellery has never been recovered.

Ricky Holland, Askhor’s lawyer, said his client’s immaturity played a part in his recruitment and was training to be a chef prior to the heist.

“She is a woman of previous good character and is a devoted mother. She has three children and is ashamed she allowed herself to be brought into this.”

Khan’s lawyer, Mark Hemming, said his client had previously been studying at college and was working as a mechanic for a family member.

Judge Bernadette Baxter said: “This was a targeted, well planned, highly organised and ruthlessly executed in which £300,000 worth of jewellery was taken and never returned.

“Your victims had run their family business since 1994 and were entitled not to worry about the risk of being robbed by people like you, motivated by greed.

“In the middle of an ordinary working day, Askhor was used to gain access to the shop. He was buzzed in only to hold the door open and allow others to enter the shop.

“Although no violence was used, one robber did raise a sledgehammer to warn the shopkeeper off.”

“The robbery has had a devastating effect on them and their business.”

Watch the raid of Sunny Jewellers by the gang: 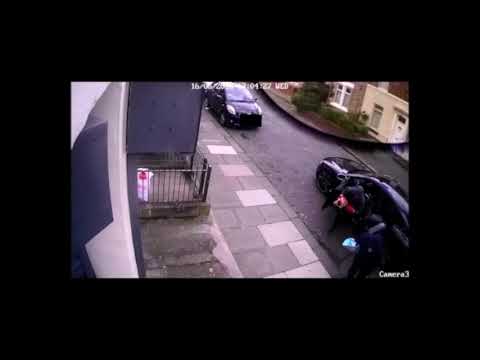 Shah Almaruf was jailed for 10 years while Ali Askhor was sentenced to seven-and-a-half years in prison.

Usman Khan, of Birmingham, was imprisoned for 11 years.

Shahzad Farooq, of Birmingham and Samantha Farrell-Blake, each received a jail sentence of 10-and-a-half years.

Dhiren is a journalism graduate with a passion for gaming, watching films and sports. He also enjoys cooking from time to time. His motto is to “Live life one day at a time.”
Man threatened to kill Sister with Knife after Family Argument
UK Man Fleeing to Dubai with £1.5m Cash loses Money