"I'm speechless, I don't know what to say, I crossed the line and I was just empty."

Commeth the hour, commeth the man, Sebastian Vettel was crowned Formula One (F1) drivers champion for the fourth consecutive time as he raced to the chequered flag at the Indian Grand Prix on 27 October, 2013.

Vettel clinched his tenth race of the season, sixth in a row and completed a hat-trick of victory’s at the Buddh International Circuit in India. The German beat his nearest and closest rival Fernando Alonso of Spain who finished eleventh in the race. 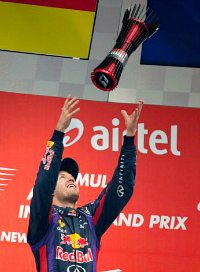 Vettel has now joined Alain Prost (FRA) with four world titles and is behind Juan Manuel Fangio (ARG) and Michael Schumacher (GER) who have five and seven world championships respectively.

He will go down in F1 racing history as the only driver to have won in the Subcontinent, as the Indian Grand Prix was withdrawn from the 2014 calendar and will find it hard to make the 2015 roster.

“I’m speechless, I don’t know what to say, I crossed the line and I was just empty. You want to think of something to say and I just can’t. It has been an amazing season, the spirit in the team is great and it is a pleasure to jump in the car and drive,” said Vettel after the race.

On Saturday 26 October, in qualifying, Vettel set the fastest lap ever on soft tyres with a breath-taking time of 1:24.119 to take pole position, followed by the Mercedes pairing of Nico Rosberg 1:24.871 and Lewis Hamilton (GBR) 1:24.941.

In fourth was Mark Webber (AUS) of Red Bull and trailing behind in eighth position was the Spaniard and Vettel’s closest nemesis Fernando Alonso on 1:25.826.

On race day, Vettel needed to finish at least fifth to be sure of the title, regardless of what Alonso did. To deny Vettel the championship and possibly take the race to Abu Dhabi, Alonso had to finish in the top two at the very least. 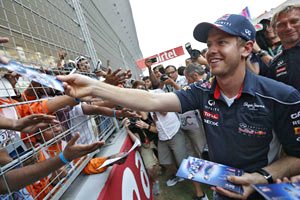 Such has been the dominance of Vettel this season; he started on pole position and continued his supremacy throughout most of the race.

At the end of the first lap, Vettel had a 2.4 second lead over Ferrari’s Felipe Massa (BRA). At this very early stage Alonso’s hope of taking the championship race into the next weekend was pretty much over.

Alonso also had the misfortune of being clipped on the first corner by Vettel’s teammate Webber who was knocked sideways by Kimi Raikkonen (FIN) from the Lotus team.

This clash damaged the front of Alonso’s Ferrari, forcing him to stop for a new one on lap two. This was inevitably the end of the race and championship for Alonso who could only battle back to claim eleventh position.

Vettel chose to start with soft tyres and made an early pit stop on lap two to have some medium type tyres; he rejoined the race in 17th position and quickly set his mark on Webber.

By lap thirteen Vettel had swiftly moved his way into third place and was closing in slowly. Webber was in control and by lap twenty-one Vettel had closed the gap and was now 11.8 seconds behind the Australian in second place. 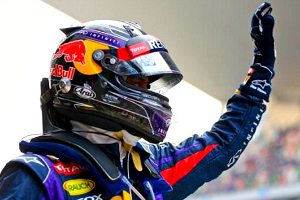 Webber made his first pit stop on lap twenty-eight, surprisingly changing his  tyres to soft ones. This proved to be a fatal error on his part as Vettel’s impressive comeback was now on the cards.

Lap thirty-one saw Vettel come into the pits for another set of medium tyres changeover, followed one lap after by Webber who rejoined the race some 13 seconds behind Vettel. The race battle between the two was effectively over on lap thirty-nine when Webber pulled off with an alternator failure. This dashed his hopes of finishing in the top two.

Vettel was now in control and by lap forty-one, led Raikkonen by about 25 seconds. By lap fifty-five, Grosjean was taking 2 seconds of Raikkonen’s time and was heading to overtake him.

Some sensational driving from Sergio Perez (MEX) using his DRS (Drag Reduction System) saw him drive past both Hamilton and Raikkonen into fifth place on lap fifty-eight. Heading into the penultimate lap, Sebastian Vettel was now leading Nico Rosberg by 26 seconds followed by Romain Grosjean.

The final lap saw Vettel storm ahead as he comfortably strolled to victory with Rosberg in second, and Grosjean in third place. Vettel celebrated his success and world title in front of the fans with some perfectly executed doughnuts!

“To win four titles, I don’t know, it’s just a big number. To join people like that [Moss]…Michael, Fangio, Prost. It’s very difficult for me to put into perspective. I’m way too young to understand what it means. I might be 60 one day and maybe then I understand but nobody cares any more. But I care.”

Fernando Alonso paid tribute to the historian Vettel: “For the title I congratulate Sebastian, Obviously a very strong season. Dominating, especially the second part of the year with many, many wins and very strong form. Well done to him and to the team.”

Not only was this Vettel’s fourth championship win, it was also Red Bull’s fourth consecutive team title following their success in 2010, 2011, 2012 and now 2013. Sebastian Vettel and team Red Bull have indeed gone from strength to strength. 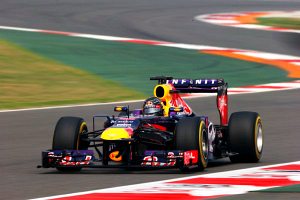 It was rather unfortunate that there were no Indian drivers participating at this years Indian Grand Prix, especially if this is to be the last ever F1 held in the country.

Narain Karthikeyan who raced in 2011 and 2012 for HRT, and Karun Chandhok who participated in free practice in 2011 for Lotus were both absent.

One of India’s greatest ever cricketer, Sachin Tendulkar received a fitting tribute from the Sahara Force India team.

They found a unique way, via a hash tag: ‘#masterblaster’ was etched on the nose section of their racing cars. Tendulkar has been a racing freak; he waved the chequered flag in the 2011 Indian Grand Prix.

We all salute Vettel for his tremendous achievements and his well-deserved place in history. DESIblitz congratulates Sebastian Vettel and team Red Bull.

Will Vettel now take his foot off the pedal for the final three races or will he want more and finish off in style? We will soon find out.

Sid is a passionate about Sports, Music and TV. He eats, lives and breathes football. He loves spending time with his family which include 3 boys. His motto is "Follow your heart and live the dream."
Manveer Panesar a promising Asian footballer
Premier League Football 2013/2014 Week 9