Vettel winner of 2012 India Formula One

This was a 4th win for Vettel on the spin

Sebastian Vettel won the F1 Indian Grand Prix two years in succession, after comfortably beating his arch-rival Fernando Alonso to extend his lead in the driver’s championship. The race was held at the Buddh International circuit located in the Greater Noida region; around 45 minutes drive east of Capital, New Delhi.

In an interesting weekend, the circuit meeting has improved compared to last year. Stray dogs on the track marred last year’s F1 event, causing a delay to the start of the race. This year the organisers ensured that the race was dog proof.

This year’s championship had developed into a two-horse race between Vettel [Red Bull] and Alonso [Ferrari]. Vettel was the fastest man, winning the previous three races and was certainly the man to beat. Alonso, who did not have the fastest car this year, was still in the same position [2nd] and trying to play catch up. 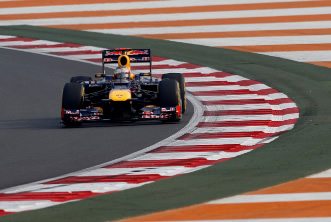 From a technical perspective, cars were continually developing with slight modifications. The McLaren team [Lewis Hamilton/Jenson Button] had problems with their gearboxes, which was going to put them at edge.

On 28th October, Round 17 of the F1 calendar came alight. There was a lot of excitement at the Buddh International Circuit located just outside of Delhi, one of the fastest circuits around.

The 5.14 km long circuit had 16 turns on each lap, including some pretty severe curves. There were 2 DRS zones on the circuit in 2012. Commonly known as ‘Drag Reduction System’, [DRS] is a motorsport technology, which potentially allows drivers to overtake under certain rules.

The weather conditions on the day were a mix of hazy sunshine and hot air coming from the south with some noticeable smog in the air. 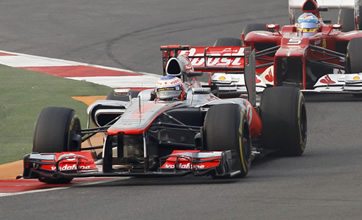 Alonso was first to the grid and feeling the pressure. Alonso strapped in his Ferrari knew it was never going to be easy to get ahead of Vettel. Vettel walked towards his car ‘Cool as a Cucumber’. He was very focused, knowing that he could not afford to slip up especially as the title race was so close.

Vettel’s Red Bull teammate Mark Webber followed by and said: “the car has a front wheel balance, but you can’t change much with the car now.”

Hamilton’s entourage arrived late onto the grid, compared to the other drivers. He was very optimistic about his chances in the race.

All eyes were on the Force India team, who had difficulty adjusting and understanding tyre behaviour, but they did potentially have the speed and pace to compete. 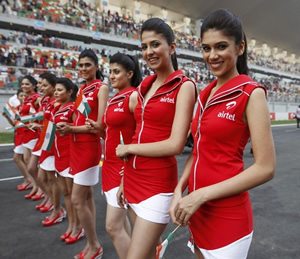 The stadium was packed with 61,000 Indian F1 Fans, film stars, cricketers and politicians. Indian shooter, Gagan Narang had the honour to wave off the chequered flag at the start of the race.

At 15:00 IST, it was lights out as the race started. As expected Vettel was in the lead at the first turn. Alonso in an attempt to pass the two McLaren drivers managed to overtake Hamilton. Alonso and Hamilton got perilously close, but the cars did not collide.

Hamilton lost two places at the start of the race, whilst Vettel went streets clear, managing to get a good lead after the first lap.

Micheal Schumacher, who started the race at the back, clipped Jean-Éric Vergne on the first lap. The initial few laps were very exciting indeed and kept the fans on their feet.

Vettel on lap 15 still led his teammate Mark Webber by +3.67 seconds. Meanwhile, the McLaren pair of Button and Hamilton just did not have the raw pace to match Alonso’s Ferrari and the Red Bull team.

In pursuit to make a challenge, Hamilton made his first pit stop on lap 33, with a change of new tyres and steering wheel. Race leader Vettel headed towards the pits on lap 34 with a convincing stop, lasting 2.6 seconds.

However, on lap 48, Alonso moved up a gear and overtook Webber, surprisingly with much ease. Jenson Button, who was having a bad day at the office, set the fastest lap of the race on lap 50.

Vettel, who started the final lap in the lead, cruised to the finishing line and won his 2nd Indian Grand Prix. Alonso came brilliantly second, while Webber edged a valiant Hamilton to take 3rd place.

A jubilant Vettel gave his car a stroke before waving to the huge Indian crowd. Vettel won the race in a time of 1:31:10.744, 10 seconds ahead of championship rival Alonso. 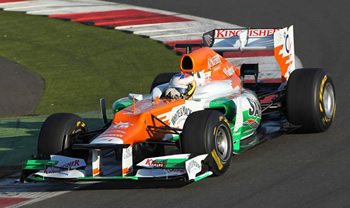 India’ s Narain Kartikeyan once again finished a disappointing 21st. He had an issue with his brakes, having similar problems before in Canada. A dejected Narain said: “I am not complaining but this is what happened.”

Vettel went onto the podium for the 44th time, one ahead of Sir Jackie Stewart. Mr. Rajan Bharti Mittal presented the trophy to the winner.

After the race Vettel said:

“To get pole position on Saturday and win the race is very special. Thanks to the team, which pushed hard and made an outstanding effort.”

A brave Alonso said “It’s not easy to fight Red Bull. They were fantastic this weekend.”

This was the 4th win for Vettel on the spin. There are 3 races to go, so anything can happen yet. Alonso is a great competitor and his driving is simply breathtaking. He never gives up. The key for him is the next race at Abu Dhabi.

Narain’s recent performances show India needs formula one, as it can help at the grassroots level, developing more players along the way,

Vettel is now 13 points clear of Alonso. In the constructor’s table, the Red Bull team is 91 points ahead of Ferrari.

It remains to be seen if Alonso can take the championship to the final race in Brazil. Sebastian Vettel a keen traveller himself, is no doubt the reigning champion and getting better by the race.

Faisal has creative experience in the fusion of media and communication and research which increase awareness of global issues in post-conflict, emerging and democratic societies. His life motto is: "persevere, for success is near..."
Sania Mirza to launch Tennis Academy in 2013
Pakistan wins 2012 Asia Kabaddi Cup