World record holder Lala Obaidullah got Pakistan off to a flyer

Pakistan won the 2nd Asia Kabaddi Cup final, defeating India 40-31 at the Punjab Stadium in Lahore in a match ending abruptly and with some controversy.

In the 2nd half of the game, the referee showed a green card to Coach Goormel Singh for his constant interference in field matters. After some heated arguments, the Team India finally decided not to continue play and the team left the field six minutes before the close of play.

Following a prolonged protest from the Indian team, Pakistan were declared the winners of the Asia Cup 2012.

The second edition of the 2012 Asian Kabaddi championships final was played in the lively and historic city of Lahore, famous for its arts and culture. 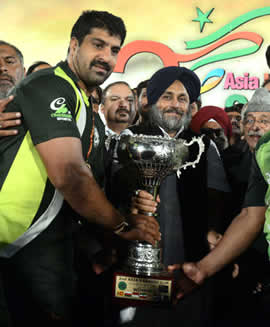 Six teams comprising of Pakistan, India, Afghanistan, Nepal, Iran and Sri Lanka participated in the tournament. The matches were held at the ovate shaped Punjab stadium, adjacent to the Gadaffi cricket ground in Lahore.

The match was built up as a battle between the Punjabi Ghabroo’s [men of strong build] of Pakistan and India. The format of the tournament known as circle style is different to the traditional Asian style of Kabaddi.

According to the rules and conditions, the middle line in the circle is a score differentiator between the two teams. If a team sends a player [raider] to the other teams half, often chanting ‘Kabaddi Kabaddi Kabaddi,’ they must touch one of their opponents and return to their own half within thirty seconds to score a point.

The final got underway at 8pm PST in the floodlit Punjab stadium, filled with a colourful atmosphere.

World record holder Lala Obaidullah got Pakistan off to a flyer, giving them an early lead after the first ten minutes of the match.

At the midway stage of the first half, Pakistan were ten points to five ahead of India. Both teams fiercely contested the game, as the players grappled each other throughout every raid.

Each time Pakistan had a lead, India kept fighting back. Pakistan had conceded five points in a row in between the 16th-17th minute. The match was very nerve racking, especially if you were an Indian or Pakistani supporter. 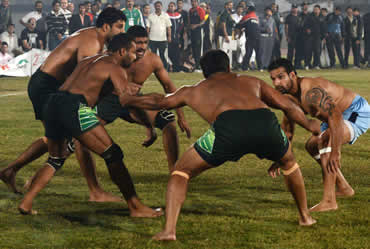 After another successful raid by the Indians, the team in blue was now within a point of Pakistan with the scores at 13-12 in favour of the home team. However Pakistan maintained an upper hand reclaiming their +2 lead with a booming raid.

With the game excitingly intense, both team captains fought hardly, having mini battles inside the Kabaddi circle.

In the first half, Pakistan displayed some excellent Kabaddi, leading by 22 points to 16. It has to be said that the Indian players emerged as strong challengers to the Pakistan team.

Following a short break the highly competitive match resumed with twenty minutes to go. It was too early to call on who would win this match.

At the beginning of the second half, the game was halted for a few minutes, with a frustrated Indian team wanting a review, on a decision they felt went against them. 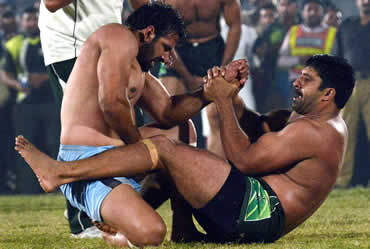 Replay footage showed as Lala Obaidullah moved forward, Gurvinder Pahalwan [wrestler – Player] was touched, and then somebody from the back pushed Lala Obaidullah outside the line. The umpires/referee were having none of it and the decision stood.

As is the case in cricket, there is nothing wrong with having a review system in place, giving teams in Kabaddi a chance to refer any marginal decisions.

Nine minutes into the second half Pakistan continued where they left from, leading by six points at 31-25. The match was now being played at a lively pace. It was safe to assume if any team reached a score of fifty points, they would go onto win the title.

After a drinks break both teams continued to play some sensational Kabaddi, scoring points on either side.

The game already played under tense circumstances, took a turn for the worst during the 15th minute when another incident revolving an Indian player occurred. The Pakistan team argued that Sukhdev Singh attempted to attack their area two times in a row, which was against the rules of the game.

In protest of the green card shown to their coach, the Indian team walked out of the ground in complete dismay. The prospect of India forfeiting the match was looming. 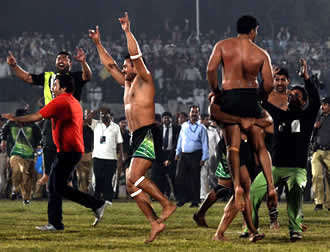 With the match not officially called off, the crowd came racing onto the Kabaddi circle claiming a Pakistani victory. An ecstatic crowd lifted Lala Obaidullah and the ‘Prince of Pakistan’ Babar Gujjar on their shoulders.

In the heat of the moment the players were seen celebrating a premature victory raising their arms up in the air.

While the celebrations were in full swing, it was hoped that the match would resume and be completed. The press and media covering the event were slightly bemused by the situation.

The Kabaddi Federation and technical committee decided with India refusing to play they had forfeited the match. The referee declared Pakistan as the champions.

This victory was a beautiful moment for the Pakistan team and for their fans, because they were crowned Asian champions for the very first time. India had already won the inaugural tournament beating Iran in their hometown Tabrez.

The Pakistan flags were hoisted all over the ground at the Nishtar Park Sports Complex.

“It’s a great win for us because we always had the upper hand against a better side, thanks to the support we got from the crowd.”

Sportsmanship spirit in these types of games is very important. When talking of this and providing a solution for future encounters, president of the Indian Kabaddi Federation graciously said: “Sports teach us the lesson of sportsman spirit so I apologise for what happened in the match and I hope from now on, by using neutral referees, no such incident will happen.”

The game was not only about who won the title, but also to foster excellent Indo-Pak Kabaddi relations, which was very visible at the concluding ceremony.

Faisal has creative experience in the fusion of media and communication and research which increase awareness of global issues in post-conflict, emerging and democratic societies. His life motto is: "persevere, for success is near..."
Vettel winner of 2012 India Formula One
Tendulkar honoured Order of Australia