A martial artist and his brother from Birmingham have set up an Indo-Chinese noodle bar, inspired by the ‘Karate Kid’ films.

"we have the experience to make something"

A martial artist and his brother have launched an Indo-Chinese restaurant that is inspired by the Karate Kid films.

Suba Miah and his brother decided to return to the Chinese restaurant industry after more than 10 years away from it.

Along with business partner Dillraj, they set up Miahgi’s Indo-Chinese Street Kitchen in their home of Handsworth, Birmingham.

The name is a combination of their surname and Mr Miyagi, of the Karate Kid film franchise.

However, the second national lockdown meant the restaurant was reduced to takeaway service only.

The restaurant is yet to welcome customers through their doors to dine-in.

The noodle bar is a mix of Indian, Bangladeshi and Chinese cuisine.

It was difficult at first, but a passion for cooking fresh and eating healthy encouraged them to persevere.

Martial artist Suba, who is a grey sash in Shaolin kung fu, said:

“It’s been a crazy time but we’ve managed to get through it.

“The idea came about from my little brother who asked me about opening another Chinese.

“We had one before called Woksters in the Jewellery Quarter. We really wanted to open another one; it was eleven years in the waiting.

“We came up with the names and the ideas with Dillraj and went from there.

“With all three of us together, we have the experience to make something of this place.”

The restaurant is inspired by martial arts, with the decor made up of temple-like wooden panels, dainty lighting.

It even has a katana sword that customers can pose with while waiting for their food. 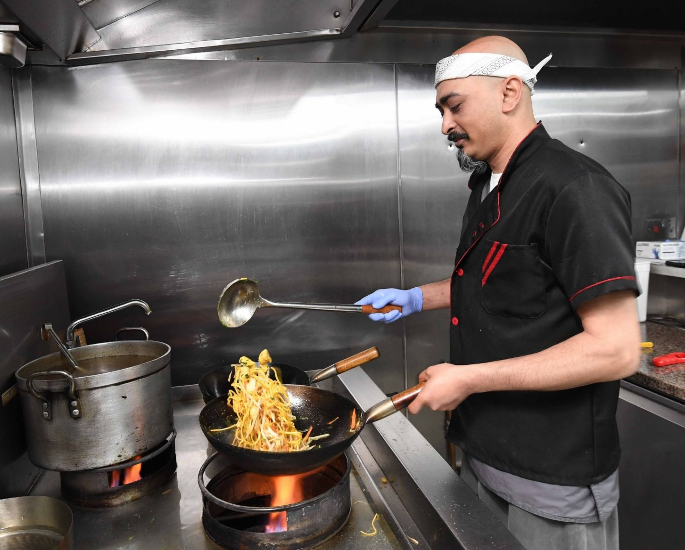 Suba discovered kung fu at the age of 20 after trying out other martial arts like kickboxing and karate.

The martial artist explained: “Not all of them took to my liking.

“I found cardio was more what I wanted to do, not just kicks and punches.

“I started off wanting to protect myself because I was a small kid. I’ve never really been in a fight but I know I can protect myself.

“My passion for kung fu is a lifestyle – it’s not something you do for one day, or one week.”

“It remains with you for life and has remained with me since the age of 21.

“We sometimes train for three hours with no water. The idea is: if you were in a fight, you wouldn’t stop for a water break, would you?”

Suhad is a delivery courier by day. He said:

“I’ve never done any martial arts but my kids have – it must have bypassed me.

“I’m very proud of what we’re doing here because we are so passionate about cooking. We are all local lads and that’s why we wanted to set up our new business here.

“Our customers love our open kitchen and design because they can see their meals being cooked.”

When customers will be allowed to dine inside restaurants again on May 17, 2021, Miahgi’s will have a ‘man vs hot challenge’.

The challenge involves eating through a spicy noodle box that is made with four different types of chillies.

If customers win, they get the meal for free and their picture will be on the restaurant’s wall. If they lose, they will have to pay for the meal.

Dillraj said: “The main thing is: this is our identity. It’s not just about noodles and nice food.

“It’s about who we are, our experiences and our culinary all put together.

“Having people satisfied with our food is the main buzz because we are so passionate about cooking from scratch.

Dhiren is a journalism graduate with a passion for gaming, watching films and sports. He also enjoys cooking from time to time. His motto is to “Live life one day at a time.”
Are Ghee and Clarified Butter Good for You?
Celebrity Chef Dipna Anand shares her Success Story