Akshay Kumar has made himself a huge name in Bollywood for his action and comedy films. Now he presents a serious family emotional drama which has a strong UK and Punjabi connection – Patiala House. Akshay tells DESIblitz more about his film and reveals more about the real ‘Akki’ in our special interview.

"Action comedy is my all time favourite"

Patiala House is all up and ready for release on Friday 11th February 2011. Desiblitz caught up with the lead male star of the film, Akshay Kumar, and asked him about the film and more. We think Akshay fans around the world will find his answers very interesting and enjoyable.

Akshay Kumar is one of the biggest superstars of B Town. He has had over 100 Bollywood releases and is a great action hero! He began his career in 1991 with the movie Saugandh. He has had many great hits in Bollywood and is an inspirational actor as he has done a variety of roles in so major movies such as Welcome and Singh is Kinng.

Akshay is a versitile actor and is well known for his action and movie stunts, which he does himself. He is often known as the khiladi hero as quite a few of his movies have had the word ‘khiladi’ in them. Being of Punjabi roots, he is one of the B Town heroes that has had a connection with Punjab and Punjabi’s in his films, such as Namaste London, Sing is Kinng and now Patiala House. Also, he was responsible for giving the UK Bhangra band, RDB, their break into producing music for Bollywood.

Read on to find out more about Akshay Kumar and an insight into Patiala House from the main star himself.

1. Do you prefer comedy roles to serious roles?

I love making comedy movies compared to serious films but I admire & feel passionate about dramatic roles, it’s a win win situation, I couldn’t make serious cinema all the time but it’s definitely satisfying when you see the end product. Comedy though is my forte, my calling in life, but Action comedy is my all time favourite.

This is purely because I feel I connect more with my audiences through the comic characters and I love to make them laugh – I think laughter is one of the best way to anyone’s heart, which makes me thoroughly enjoy my work so much more, even on the hardest of days. 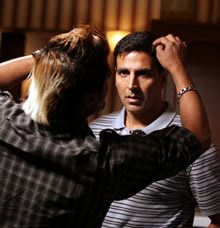 2. You filmed Patiala House in the UK, what do you like about the UK?

I have filmed in UK on numerous occasions and I discover something new upon each visit. I love the people, the architecture, the British countryside, the multitude of authentic cuisines from all over the world that are so readily accessible… I also love the fact that Asian communities in UK are so loyal to their ethnic roots and identities that coming here always feels like visiting home away from home. The communities are so closely knit here. I think that is the best part about our culture, that no matter where we live, we are always Indian through & through, completely there for each other in a second…

In relation to Patiala House, we filmed in locations such as Southall, Covent Garden, Harrow, Woodford and not to forget the Oval, Lords and Nottingham Trent Bridge cricket grounds. 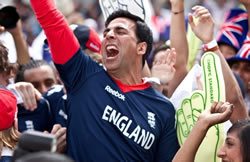 3. Patiala House is a family film with some fun and we know you are a funny guy, how much fun are you in real life?

Patiala House is a strong emotional drama and I play a very serious role in this movie. It does have its lighter moments, but the entire plot is very serious, dealing with the issue of cross generational conflict that arises through migration to a different country. The central messaging of the film though is about second chances in life and how one must not give up on their dreams.

In real life though, I guess I am very playful. I enjoy playing pranks on my fellow stars while on set. I guess it proves some light relief after an intense day’s filming. Laughter is the perfect remedy for the soul. You need to see the funny side in life – it helps lift your spirit and elevates you above the stresses and pressures of daily life.

4. What language do you speak mostly in? Punjabi? Hindi or English?

This is another aspect that we Indians stand out in. We in India, especially in the metro cities, are accustomed to speaking 2-3 languages mixed together, so it’s a very multilingual environment. At home we mostly speak in Punjabi, Hindi and occasionally English. My son & niece both speak beautiful Hindi & Punjabi, there English is far superior to what mine was at there age… 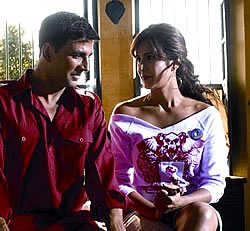 5. Which film character of yours to date is like the real Akshay Kumar?

I’m here & there in all my characters, but of late I would say, ‘Namastey London’ would be a fine choice, a charcter that goes to any length to care about others happiness, ‘Blue’ for the daredevil in me, & ‘Patiala House’ for the family man in me….

6. What is your favourite Punjabi food?

My favourite Punjabi food is anything prepared by my mom but what I love the most is her Sarson ka Saag and Makai ki roti. I have tried it at so many restaurants in India and abroad, but then the taste and the flavours just never match up to my Mom’s cooking. I also enjoy the traditional Rajma-chaval, Kheer, see now I’m over indulging ;o)

7. You have a strong connection with Punjabi culture in many of your films. Why do you think the Punjabi film industry itself is not thriving?

The Punjabi film industry produces some amazing films, showcasing some exceptional film work and on often low budgets. But sadly, I think the industry has lacked the widespread distribution networks to ensure a global visibility. That is certainly changing though and hopefully the incredible talents that the Punjabi film industry boasts will be showcased on the kind of international platforms they truly deserve to be. 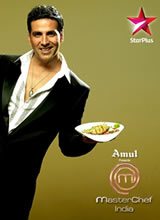 9. Master Chef has been a hit series for you. Which dish do you like cooking most and why?

Master Chef was a great show to host. It was a completely different experience compared to my last TV show, Khatron ke Khiladi. MasterChef brought back memories of Thailand where I worked as a chef in Bangkok to support my Martial Arts dream. As far as cooking is concerned my favourite dish is my famous Thai Green Chicken Curry, none-spicy!! My wife & son love it when I cook them Pastas on a Sunday afternoon, & I make the meanest chocolate fudge cake, but I save that for special occasions of course! 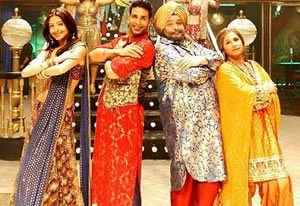 10. Tell DESIblitz.com readers why they should go and watch Patiala House?

DesiBlitz.com readers should watch this film to be inspired. Though it’s not a preachy film, it has an aspect that will make individuals think about their dreams and realise that, if they didn’t seize upon an opportunity in life the first time round, it is never too late to make the most of the second chance that life presents.

It’s a family drama that will appeal to all generations and to anyone who has an experience of migration.

Some wonderful acting talents, both established and emerging, share the same screen space together, and have united to light up cinema screens. And you’ll be able to see me in an avatar that’s never been witnessed before!

There you have it! Akshay Kumar has given us a very interesting insight into his new movie and we have learnt that he’s a very family-oriented guy, intriguing character and passionate about his art. Catch him in Patiala House and watch the emotions, struggles and light fun of a Punjabi family torn apart by dreams and aspirations.

Nazhat is an ambitious 'Desi' woman with interests in news and lifestyle. As a writer with a determined journalistic flair, she firmly believes in the motto "an investment in knowledge pays the best interest," by Benjamin Franklin.
Small Screen Stars of Bollywood
It’s Yamla Pagla Deewana for RDB