Television has become big business in India for Bollywood stars. A medium that beings them closer to their fans and exposes them to bigger audiences is a trend being followed by many actors. We look at some of the stars making it big on the small screen.

"Shows like KBC, Bigg Boss are as big as a film."

Bollywood stars have always been known for their stardom on on the big screen. And usually any aspiring actor will want to make it big on the big screen. However, a recent trend in Bollywood is the adoption by many A-list stars of moving to the small screen too, by appearing in very successful and popular television shows.

Reality television and performance shows are two areas where many Bollywood stars are being seen more and more on television. Shows like Bigg Boss, Jhalak Dikhlaja and Indian Idol, are all major hits of the small screen in India, and the growth is tremendous. Reality programming is a major attraction for the youth of India. Nikhil Gandhi, business head for UTV Bindass says: “What appeals to the youth is essentially reality programming. It is difficult for them to watch a show that is fictionalised.” 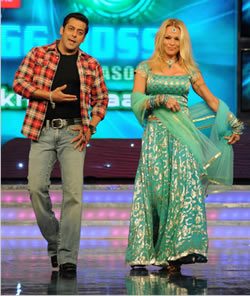 Dabangg actor Salman Khan narrows it down to the instant connection of the small screen with the audience and says: “For any actor, the real heroes are his fans. So by doing a TV show my audiences get to see the real Salman. Isn’t this (TV) a better reward for me?”. That’s more of a reason than just the exorbitant fees paid to stars as is widely believed.

Viewers have a different perspective of the stars on the big screen and seeing them on the small screen gives them a chance to see the actors in a totally different light, away from the glitz, glam and make-up of Bollywood movies. Let’s look at what some A listers are up to on the small screen of Indian television whilst being away from the ‘centre of attraction’ on the big screen.

An actor, a star, a wax work, what’s next for the flexible Hrithik Roshan? Hrithik makes his debut on the small screen hosting the “Just Dance” competition airing on Star Plus mid-2011. It is said that Hrithik will be paid 2 crores for this show. Hrithik Roshan puts his heart and soul into his 17 hour stretch of shooting. Coming closer to the 2012 Olympics, “Just Dance” had a working title of “Dance Olympic”. So will Hrithik Roshan become our next dance pro? 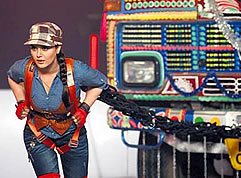 Starlet Preity Zinta is preparing to host the Guinness Book of World Records. This television show will be her new challenge as a host. Auditions for the Guinness Book of World Records are being held in April 2011. She has worked her way up the industry ladder. She has gone from writing columns for BBC News Online for South-Asia to becoming a well- known actress. Now we will see Preity as a presenter.

Salman Khan has become popular anchor for Bigg Boss and 10 Ka Dum. Two shows that have achieved massive audiences. Bigg Boss is a reality television show based on UK television’s Big Brother. The news is the Khan will be presenting the fifth season of Bigg Boss in 2011. A source close to the star said: “He is extremely happy with the way the show turned up and the response he received. This was his second time as a television host after 10 Ka Dum, He is now looking forward to another stint with Bigg Boss 5.” The show has featured many celebrities in the house including Hollywood star, Pamela Anderson.

Kihladi hero Akshay Kumar put on his apron to host MasterChef India, an Indian competitive cooking game show based on the original British version of MasterChef. It screens on Star Plus. Akshay Kumar is the host and judge of the show sharing responsibility with notable chefs Ajay Chopra and Kunal Kapoor. Other popular Bollywood stars such as Katrina Kaif have appeared on the show to cook and taste the culinary delights of the hit small screen programme. Akshay himself has a passion for cooking with Thai Green Chicken Curry being his favourite dish. 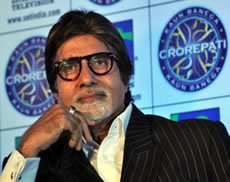 Amitabh Bachchan one of the biggest stars from Bollywood started presenting, the gameshow, “Kaun Banega Crorepati?” (KBC) in the year 2000 after the UK version, “Who Wants to be a Millionaire?” made it huge on UK television. The show has won many awards and featured many Bollywood stars as guests including Anil Kapoor who plays the anchor in hit film Slumdog Millionaire. Amitabh’s move to present KBC became a pinnacle point for the show. Bollywood heart-throb Shahrukh Khan presented the show in Amitabh’s absence in 2007.

Talking about how it felt doing the first show in 2000, Amitabh said:

“I was scared and nervous not knowing what the public would have to say about the show, about my involvement and its eventual result.”

Daring Bollywood actress and item number star, Mallika Sherawat, a judge on the Colors channel show ‘Chak Dhoom Dhoom’ wanted to break away from targeting adults in her films to connecting with those under 18. The dancer’s attitude and expressions are of prime importance in this show. The show also features Bollywood actress Urmila Matondkar as the judge in the gala rounds which is another dance reality show that exposes talent from all over the world.

The growth of the television market is important to India because it is a major medium used by the everyday public, and using Bollywood stars to attract audiences is presents a win win situation. Ajit Thakur, business head, Sony Entertainment Television says: “Shows like KBC, Bigg Boss are as big as a film. The reach TV gives today is far wider than film release on a weekend. And the remuneration is also high. All these factor make stars host TV shows.”

Actors turning to small screen becomes a useful strategy for exposure and making profits for both the channels and the stars. This in turn, raises audience viewing figures. This year sets itself a target for more stars appearing on the small screen than ever, which shows that it is definitely a growing trend for the big stars to be seen as the small screen stars of Bollywood.

Smriti is a qualified Journalist with an optimistic take on life, enjoying sports and reading in her spare time. She has a passion for arts, culture, bollywood movies and dancing - where she uses her artistic flair. Her moto is "variety is spice of life."
Patiala House debut for Hard Kaur
Akshay Kumar talks Patiala House