The story about a British Asian who wants to play cricket for England is the backdrop for Akshay Kumar’s movie Patiala House. Featuring Anushka Sharma as his love interest and Rishi Kapoor and Dimple Kapadia as his parents, the film makes way for the debut role for Hard Kaur.

"I was always making sure I was speaking in Hindi"

Patiala House is the next new release directed by Nikhil Advani. We see the dashing Akki (Akshay Kumar) paired opposite Anushka Sharma in this movie. It’s their first on screen appearance as a jodi in a B Town movie so lets see whether or not there’s any on screen chemistry with the two.

The main star cast consists of Akshay Kumar who plays Parghat Singh Kahlon (aka Gattu), Anushka Sharma playing Simran. Akshay’s on screen mum is played by Dimple Kapadia, who as we all know is his real life mom-in-law, she is Mrs Kahlon in the movie and Akki’s on screen dad is Gurtej Singh Kahlon, played by none other than Rishi Kapoor. We therefore see Rishi Kapoor and Dimple Kapadia acting opposite each other once again, brings back memories of the old ‘Bobby’ days!

But the special connection with the UK is the appearance of Hard Kaur in the film. We see the Handsworth girl playing the role of the siddi-saddi character Komal Chatwal with a long ghut and middle parting in her hair style which is miles away from the Hard Kaur we have to to see and know in Bollywood. DESIblitz caught up with Hard Kaur and asked her about her debut role in the film. See what she says in the exclusive video interview below.

Hard Kaur’s role a Komal portrays her as a classically trained musician who has a great sense of rhythm. However, the only outlet she has for her music is by singing religious hymns. She is happily unmarried to the displeasure of her parents and wants to break out as a rap star. So, her real persona is not that of the simple desi looking girl she is in appearance. 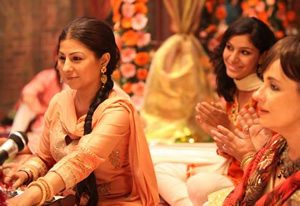 When asked how Hard Kaur coped with speaking in Hindi, she replied that she did not have a huge problem because she can read the language and feels a strong connection with Indian public, and said: “As soon as I got back, I was always making sure I was speaking in Hindi. I love speaking Hindi!” She humoured how her Hindi has changed from formalised to more slang Mumbai style too!

Patiala House is the story of a Sikh joint family of four generations. The film is shot in London, Southall to be precise. Patiala House has 22 family members and the man who rules the roost is Gurtej Singh Kahlon. Parghat Singh gives up on his dream in order to save the reputation of his father. He then meets and falls in love with Simran who provides him with the support and strength to be able to stand up for what he believes in and pursue his dream. The moral of the story is about pursuing one’s dreams.

As quoted by Nikhil Advani, the director of the film:

“The essence of Patiala House is pursuing your dream when life gives you a second chance. In this pursuit, Akshay happens to be a cricketer, but he could have been a musician or a poet. It can be your story or mine, Patiala House is the story of the Kahlon family, and their travails.” 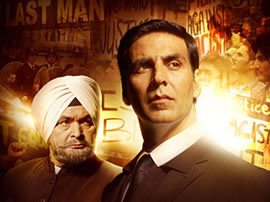 The popular song in the movie ‘Laungda Lashkara’ is a hit amongst the audience. With beautiful clothes donned by Anushka and Akshay it’s a very colourful, upbeat and picturesque performance. The music directors for this movie are Shankar Ehsaan Loy who have worked with Hard Kaur in the past too.

Nikhil wanted the characters in Patiala House to look quite realistic therefore borrowed clothes from various men from Southall who had a similar build and height to that of Akshay.

The concept of family certainly runs as a thread through this movie as Akshay’s wife Twinkle has assisted in the production and his mother-in-law plays his mum! It looks like there’s a possibility that Patiala House is set to be Akshay’s next big hit, and if it is, it will no doubt bring more offers for Hard Kaur to harness her newly found acting career.

Nazhat is an ambitious 'Desi' woman with interests in news and lifestyle. As a writer with a determined journalistic flair, she firmly believes in the motto "an investment in knowledge pays the best interest," by Benjamin Franklin.
56th Filmfare Awards 2011 Winners
Small Screen Stars of Bollywood