The 56th Filmfare Awards ceremony in Mumbai had its fair share of winners and losers. This year Debanng and My Name is Khan were the top 2010 movies head to head and both won top awards. Along with recognition for smaller budget films in the Technical Awards.

"I am happy that I won it for Udaan"

Saturday, 29th January at Yash Raj Films Studios, in Mumbai, India was the setting for the 56th Filmfare awards. The show hosted by Ranbir Kapoor and Imran Khan was a glitzy affair with some of the biggest names from Bollywood all under the same roof.

The two big films going head to head for the awards this year were SRK’s My Name Is Khan and Salman Khan’s Dabangg.

Sonu Nigam started off the night of the awards by performing ‘My Heart Will Go On’ from Titanic live on stage. For this incredible singer the day represents a special time – 20 years in the industry.

A highlight for the 56th Filmfare Awards was Shahrukh Khan and Madhuri Dixit’s sizzling performance on stage.

The Best Film category was won by Dabangg. Arbaaz Khan and his wife Malaika collected the award. Salman Khan was not present at the awards. Prior to the ceremony, Arbaaz said: “Salman is not here tonight as he is shooting. And it doesn’t matter to me if he wins or not. For me he is the winner. And then we have got so many nominations so it’s an achievement in itself. We are not here to applaud just ourselves but also applaud other’s work from the film fraternity.”

The Best Director award was won by Karan Johar for Shahrukh Khan and Kajol’s hit My Name Is Khan. This is Johar’s second Filmfare trophy after 2 years.

In the Technical awards the people behind the scenes of some of the biggest Bollywood movies of 2010 were rewarded for their hard work and efforts. The film Udaan took most of the awards with Amit Tridevi winning the award for Best Background. He said: “I am happy that I won it for Udaan as it is a small film and I wasn’t even expecting an award for it. There were big competitors in the same league so I am glad.” Farah Khan won the Best Choreography award and dedicated the award to her triplets saying: “Today was their sports day.”

Here are the winners of the 56th Filmfare Awards:

Best Actress in a Leading Role
Kajol (My Name Is Khan)

Best Scene of the Year
Golmaal 3 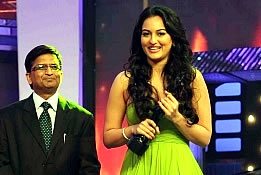 Amitabh Bachchan’s tremendous service to the Bollywood film industry was marked with the ’40 Years of Greatness Award’ recognising the decades of work the great actor has contributed to Indian celluloid.

Prabodh Chandra Dey, popularly known as Manna Dey, was given the ‘Lifetime Achievement Award’ for his contribution to many songs and the music for a variety of films. This was his second Filmfare award, as he won his first back in 1970 for “Ae Bhai Zara Dekh Ke Chalo,” a song from “Mera Naam Joker.” 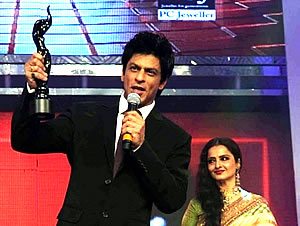 Debangg won top film an and six awards in total on the night. Sonakshi Sinha picked up the award for ‘Best Debut Actor (Female)’ giving her instant recognition in her first real role in a Bollywood movie. Abhinav Kashyap the director of Dabangg when asked about a sequel said: “Most definitely, I will be directing the Dabangg sequel.”

However, the night for acting and directing talent went to My Name is Khan with SRK, Kajol and Karan Johar all winning their respective and key awards of the ceremony.

SRK in his emotional speech when collecting his awards said: “I want to take this award for my daughter. I wanted to make her wear a red gown and walk in with me on the red carpet. But she’s unwell.”

So, another year Filmfare Awards is over and many of the popular names of Bollywood have gone home accompanied by special ‘black lady’ on the night.

Nazhat is an ambitious 'Desi' woman with interests in news and lifestyle. As a writer with a determined journalistic flair, she firmly believes in the motto "an investment in knowledge pays the best interest," by Benjamin Franklin.
Hrithik Roshan makes it in Wax
Patiala House debut for Hard Kaur