Hrithik Roshan makes it in Wax

Starting with Amitabh Bachchan in 2003, Madame Tussauds began to honour popular Bollywood stars in their waxwork hall of fame in London. Now its was the turn of Bollywood hunk Hrithik Roshan to greet his replica waxwork in person.

Hrithik Roshan was unveiled in wax to his real counterpart at Madame Tussauds on the 20th January 2011. The life like figure of Hrithik donned in a pink sleeve-less shirt with toned abs and in blue jeans stood tall, as everyone attending wowed the model. DESIblitz was invited to Hrithik Roshan’s special day at Madam Tussauds in London, UK.

A reception of dhol players and dancers preceded Hrithik’s entry into the venue. Like anybody coming across a replica figure of themselves, Hrithik was taken back by its presence, as the curtain fell. His opening words were ‘Wow!’ In full admiration of the work produced by the wax sculpturers he said: “It’s phenomenal. I’ve never seen something like this in my entire life. We have to admire the process of the House of London. I am a fan. I am a huge fan of the artists of Madame Tussauds.

Hrithik’s family were there to support him and to address their own curiosity of how the wax figure looked. Suzanne his wife hugged the figure at one point and their two sons were looking very shy seeing a model of their father. Hrithik’s father, Bollywood director and producer, Rakesh Roshan, and his mother looked proud of their son’s achievement. 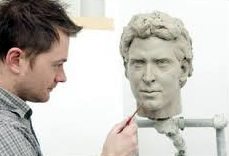 Hrithik Roshan was invited last year for his measurements, when meticulously, the sculpture artist measured every aspect of Hrithik’s features and torso. Finding the eyes was a key task because of their unique colour for an Indian person. Colin Jackman, the Principle Sculptor at Madame Tussauds Studio, said: “He’s got very distinctive eyes and it was one of the things we really wanted to get right.” 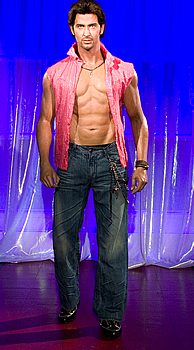 Sharing his experience Hrithik told us: “I’ve been to Madame Tussauds 25 years ago, standing outside and my grandfather was right there. I was just a kid and I was so excited. I see this through my eyes and I feel good and I see this through my family’s eyes, and I feel even better. This is almost like a symbol of all the countless, millions of failures that I have over- come in my life.”

The pose and the look of the waxwork comes from Hrithik Roshan’s character role in the blockbuster Bollywood movie Dhoom 2, as chosen by his fans. Jackman said:

“It’s always difficult doing someone as good looking as Hrithik. It’s quite challenging to get his specific look to make the fans pleased with it.”

The star of hit Bollywood films like Kaho Naa…Pyaar Hai, Dhoom:2, Krrish and Jodha Akbar, is the youngest male actor to be honoured by Madame Tussauds. His figure took four months to create at a cost of around £150,000.

Hrithik Roshan is the first figure to be unveiled in 2011. Watch the video below and see what Hritik told us about his incredible waxwork.

Here are DESIblitz photos from this special Hrithik Roshan event at Madame Tussauds.

Marie Tussauds began her career dating back to the Paris of 1770. This is where Marie Tussauds learnt to model wax likenesses under the tutelage of her mentor, Dr Philippe Curtius. At the age of 17, she became art tutor to King Louis XVI’s sister at the Palace Of Versailles. Subsequently, in the 19th century she came to Britain. In 1835, Madame Tussauds’ exhibition established a permanent base in London as the Baker Street Bazaar – visitors paid ‘sixpence’ for the chance to meet the biggest names of the day. The attraction moved to its present site in Marylebone Road during 1884.

Francois-Marie Arouet Voltaire was the first wax figure to be created at Madam Tussauds in London. He was a famous, writer, play writer and philosopher.

Madame Tussauds has a huge mix of many Hollywood, Pop and Sports star wax figures. Recently, many Bollywood wax figures have been launched. The first Bollywood wax figure was Amitabh Bachchan in 2003. Subsequently, Salman Khan, Shahrukh Khan and Aishwarya Rai joined the Big B in the hall of fame.

The figure of Bollywood star Shahrukh Khan was the first ever to receive a proposal of marriage. A passionate female fan travelled down from Bradford, UK. shortly after ‘King Khan’s’ launch in April 2007 just to present his wax figure with a diamond engagement ring. She’s still waiting for an answer!

The non-Bollywood figure present at Madame Tussauds is that of the famous Indian cricketer, Sachin Tendulkar.

The Merlin Group, the commissioning company for Madame Tussauds, has enabled the popularity for tourist viewing worldwide. This has made it possible for Bollywood stars to become well known globally through the medium of waxworks. It will be now interesting to see who is next on the list.