The 2011 Asian Music Awards took centre stage in London with a jam packed evening of live performances and awards through the night of glitz, glamour and lots of music. Winners include Mumzy Stranger, Jaz Dhami, Jay Sean, DJ Kayper and Bobby Friction.

The Roundhouse in Camden Town in London, the venue for the 2011 UK Asian Music Awards (AMA’s), played host to a roster of stars and artists from the British Asian music industry.

The razzle dazzle of the evening started with the artists and guests arriving to the venue in style. In for an exciting night of entertainment the place  buzzed with people. On stage appeared many acts from various genres of Asian music. The ceremony was started with Tommy Sandhu from the BBC Asian Network on stage greeting everyone, followed by Nihal from BBC Asian Network who hosted the event in a dashing white suit.

There were performances from Nindy Kaur and Parichay with police props for their act; Outlandish performed ‘Aishaa’ amongst other songs and were a massive hit on stage; Jernade Miah sang ‘Switch Me On’ to loads of screaming girls; Mumzy Stranger performed his new single and collaborated with Aggro Santos, Loick Essien and Junior; Preeya Kalidas (who won Best Female Act)performed Shimmy Shimmy with H Dhami joined by Skepta, and Sukshinder Shinda shone on stage with a silver jacket with amazing backing dancers. 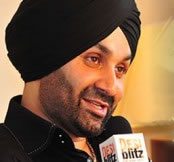 Jay Sean was present at the awards and picked up the Best Male Act and Best Video awards but didn’t perform. He received his video award on stage with old music buddy Juggy D. Around the venue many other well known faces from the Asian music scene gave the place a great vibe.

Jaz Dhami got the award for Best Desi Act beating Jazzy B, Juggy D and Sukshinder Shinda. Upon receiving the award he thanked everyone who bought his music.

The Best Music Producer award was won by Sukshinder Shinda who beat Rishi Rich, Punjabi by Nature and Panjabi MC; his award was presented by Naughty Boy and Siva from The Wanted.

The Best Urban Act award was presented by Florent Malouda, Jaz Dhami and Dajlit from Jaguar and went to Mumzy Stranger, who beat Jay Sean, MIA, Menis and Raghav., a surprise result as many thought Jay Sean would’ve been more apt for to receive this one.

The award for Best Male Act, a highlight award for the night was presented by singer and television personality Alesha Dixon to Jay Sean, who both have performed on a single together. Jay deserving of the award still made great efforts to thank Rishi Rich and everyone else who has supported him on his musical journey to date.

One of the major awards of the evening was presented by Kanya King founder of the Mobo’s, which was the Commitment to Scene award, given to Cornershop.

A great night for Brit-Asian music with some well deserving winners and some surprises too. Another year celebrates talent that has been recognised by the masses. Well done to all.

Jas likes to keep in touch with the world of music and entertainment by writing about it. He does like hitting the gym too. His motto is 'The difference between the impossible and the possible lies in a person's determination.'
Rahat fined for not Declaring Cash
Roopkumar Rathod and Sunali Rathod