The ceremony to celebrate the success of British Asian sports personalities took place in London, the 2011 British Asian Sports Awards event rewarded individuals for their tremendous contribution to their chosen sports and honoured their dedication and determination to succeed. DESIblitz were at the show to learn more about the winners.

Grosvenor Hotel in London on 5th March 2011 celebrated the 10th British Asian Sports Awards. The show promoted the success of British Asian sports players, coaches and teams for 2010. DESIblitz went to the event and caught up with some the winners and ambassadors of this annual show.

Celebrities such as Nitin Ganatra from Eastenders and stunner Laila Rouass from Holby City made a grand appearance. Music stars such as Ragav, Juggy D and Damage, X- Factor Olly Murs and Shayne Ward were all at the show to support its cause. Comedians such as Gina Yashere, Anuvahood and Shank star Adam Deacon were joined by Eastenders stars Diane Parish, Ramon Tikaram and Ricky Norwood; all present to show their support.

Cricketers such as Saj Mahmood, Isa Guha and Farukh Engineer came to show their support. Rajiv Ouseph and Natasha Shafqat were the ambassadors for this year. 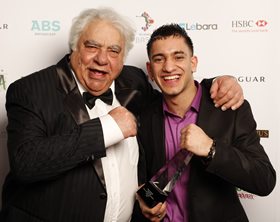 Amir Khan’s brother, Haroon Khan made an appearance at this event in absence of his brother. He collected the award for Personality of the Decade on behalf of Amir. Haroon is also well known for his own boxing. Haroon made a short speech on his behalf:

“I know Amir is gutted that he can’t be here today. Acknowledgement from the Lebara British Asian Sports Awards means so much to him. He’s got all four of his Awards in pride of place at home. The judges were the first to recognise his talent and the BASA’s put him on the map, way before anyone had even heard of him. And now, a whole 10 years on, the Lebara British Asian Sports Awards are still behind him, acknowledging his incredible journey. He has been a huge inspiration as an Ambassador for the Awards, and definitely one for me. I’m honoured to be collecting this award on his behalf and maybe next year it will be me on stage for a different reason!” 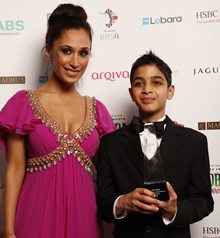 Preeya Kalidas and Mr Dalip Puri presented the award for Junior Sports Personality of the Year (under 15’s) to Mazz Bin Saud. Maaz is the youngest World Champion Kickboxer in England. He has immense talent, picking up many awards on his way. Originally from Pakistan, he has been competing around the world. His future ambitions are to “win more World Championship Awards.” Doing this at the age of 10 years, his family are really happy for him. His coach was his inspiration.

The Young Sports Personality of the Year (Male under 18’s) went to Shivsinh Thakor. Last year he won the ‘Outstanding Achievement in Cricket’ award. He has currently signed a three year contract with Leicestershire County Cricket Club. He will be playing for the Under 19 squad and previously played for the Under 17 squad. He said, “Selections for the second tier will be based on performances from his previous tiers.” 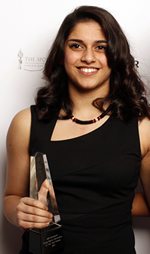 The number one high achieving Young Sports Personality of the year (Female under 18) went to Nur- Jehan Shaikh (Nuri). Nuri loved karate since the age of 5. “I want to conquer the world,” she told DESIblitz. Her future aspirations are to compete as a senior at world level-18 plus. Nuri has been training for 12 years at the club. “My coach saw my potential and took my talent for karate further,” she revealed. Nuri represented England at the European Championship in Serbia. “It was my first time and was very exciting,” she said.

Danny Bath picks up the award for Most Up and Coming Sports Personality of the Year. Danny has been playing football since the age of 10. He made his first professional goal in a 1- 0 win over Oldham. Danny’s career in football led him to last year’s award for Outstanding Footballing Achievement. He has been with the Wolverhampton Wanderers ever since and made his debut in a 2-1 win over Southend in the Carling Cup. 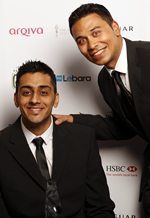 The Outstanding Achievement Award went to Mandip Sehmi. Last year he won the award for his exceptional achievement in wheelchair Rugby.

Mandip told us about his cause and said: “We are trying to expose and promote the Paralympics as much as we can.” He has been playing Rugby in the United States. He said: “International players play in the U.S. Premiership to gain more experience to become world champions.” Mandip goes from strength to strength training on a four year cycle for the 2012 Olympics. “I’m enjoying it, its brilliant,” he told us. The chase of medals has kept him going in his training in wheelchair Rugby. He concluded what the award meant to him and said:

“This award is the highest honour I have taken up in my life.”

Anthony Hamilton (Lewis Hamilton’s father) and Mr. Sanjay Anand presented the award for Coach of the Year to Bobby Bhogal. He is the only coach on the England Hockey Singles. Being a coach, Bobby wants to give inspiration to the rest of the Hockey youths. Bobby trains his team for every tournament. He said, “I film the tournaments, analyse them and correct the mistakes. Analysing the team’s strengths and weaknesses, helps them to improve their performance,” he said. He will be playing for the Masters Hockey Tournament in the London 2012 Olympics.

India’s former successful cricketer Sachin Tendulkar won, the International Sports Personality of the Year award. He is known as the greatest batsman in Cricket. He is someone that needs no introduction. He has previously played in the first Test against South Africa in December 2010. 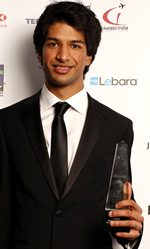 The British Asian Sports Personality of the Year went to Luciano Bacheta.

Luciano built his career from carting. He was only 13 at that time but has progressed. He decided to become a F1 driver. “I’ve always loved cars and race sports,” said Luciano. “It’s been great to work with Anthony Hamilton,” he added. He has been racing in the Formula Palmer Audi Championship. Presently he is racing for the Formula Renault Euro Cup.

It was very rewarding for us to see the dedication and hard work being recognised by BASA for these sports personalities who are aiming high for the future.

Here is a complete list of the winners of the British Asian Sports Awards 2011.

Most Up and Coming Sports Personality of the Year

Here is a gallery of photos from the BASA 2011 event:

The BASA event gave an opportunity to people of all cultures and diversity. It shows that there is tremendous potential amongst British Asians to fully succeed in the world of sport. Most importantly the event helps recognise the achievements and progress to date.

There is vast amount of talent out there and the BASA 2011 event should inspire everyone to follow their dreams, and no longer is it a case of always having to follow the traditional career paths of becoming a doctor, lawyer or pharmacist.

Smriti is a qualified Journalist with an optimistic take on life, enjoying sports and reading in her spare time. She has a passion for arts, culture, bollywood movies and dancing - where she uses her artistic flair. Her moto is "variety is spice of life."
2011 ICC Cricket World Cup
India win Pakistan to 2011 ICC final