One of the most historic games in the International Cricket Council’s World Cup was played between India and Pakistan on Wednesday 30th March 2011. With India clinching victory at this semi-final, which transpired as a brilliant game of cricket played by two teams eager to make it to the final.

"We will win the final also"

India faced Pakistan in one of the most highly watched games in the history of the ICC World Cup. The clash between rival countries on Wednesday 30th March 2011 was a major event of the competition with both teams showed vigour and fight, but India showed it’s strength as a team and won Pakistan to make it to the final on 2nd April 2011 against Sri Lanka.

With the Prime Minister of India, Manmohan Singh joined by Pakistani Prime Minister Yousuf Raza Gilani to watch the game, the match was full of the thrills, excitement and top notch cricket. Crowds came in their thousands, with tickets being sold at incredible prices on the black-market. Pakistani fans who travelled over the border were welcomed to the ground in Mohali, in Punjab, India. 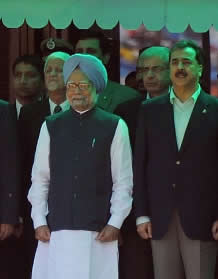 India won the toss and elected to bat first. Sachin Tendulkar and Verinder Sehwag batted first for India. Then after an amazing start, Sehwag was LBW’d out at 48-1 with a ball from Wahab Riaz. Then came Gambir to join Tendulkar. At 75-1 Tendulkar had an LBW turned and then immediately after the next ball from Ajmal had another decision overturned. Then Tendulkar survived further when balls were not caught properly by Pakistani fielders. At 116-2, Gambhir was out stumped by Akmal.

Kholi joined Tendulkar until he was out at 141-3 when Umar Akmal took a routine catch. Then a big gun of India was astoundingly hit out for a duck, Yuvraj Singh was bowled out by Wahab Riaz with his first ball. Dhoni then made it to the crease opposite Tendulkar who was still going strong at 60 runs. However, at an Indian score of 185-5, Pakistan’s captain Shahid Afridi caught Tendulkar out with a sharp low catch at short extra cover. Tendulkar missed out on a century by making 84 runs. 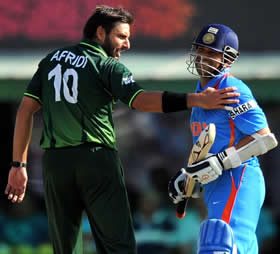 Dhoni was then joined by Raina. At 205-6, Dhoni was LBW’d out after a ball from Wahab Riaz, who now had got his fourth wicket. At the 42nd over Raina was joined by Harbhajan Singh in bat. At 236-7 Harbhajan was stumped out by Akmal after being bowled by Ajmal. Then Zaheer joined Raina who was going strong at 33 runs. Wahab Riaz struck again by bowling Zaheer out to be caught by Akmal, reaching a fantastic tally of five wickets at 256-8. Subsequently, Ashish Nehra was run out at 258-9. Leaving Raina to get 260-9 with Patel at the 50th over, concluding India’s innings. 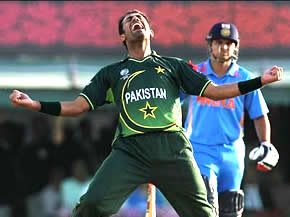 Pakistan started their batting with Akmal and Hafeez, who did very well until 44-1 when Yuvraj caught Akmal out. Hafeez was then joined by Shafiq. At 70-2 Indian captain MS Dhoni caught Hafeez out. Shafiq was joined by Younis in bat. At 103-3, Yuvraj bowled Shafiq out. Then at 106-4, Younis is caught by Raina. At the 33rd over, Pakistan are 142-4.

Harbhajan bowls the first bowl at Umer Akmal and at 142-5, hits the wicket, dismissing him for zero. During the 36th over, Munaf Patel for India bowls out Razzaq. Pakistan’s batting is now at 152-6 and their captain, Shahid Afridi, comes out to bat with Misbah. The match gets thrilling at the 41st over, when Pakistan are 181-6 and in need of 80 runs from 54 balls. Then, dramtically, Afridi hits a full toss high into the off side, and Sehwag takes the catch on the edge of the circle.

Bowling hero, Wahab Riaz comes out to join Misbah after the dismissal of Afridi at 184-7. Pakistan’s hopes to win begin to faze. At 199-8, Tendulkar catches Wahab Riaz’s hit from the ball of Nehra. By 208-9, Umar Gul who replaced Riaz, is LBW’d after the bowling of Nehra. Now India were gettling closer to their win and finally at the 49.2 over and at a score of 231-9, Pakistan are all bowled out with Misbah being caught by Kholi from the bowling of Zaheer. India won the game by 29 runs. A huge victory for the home team.

According to overnight rating agency aMap,

the semi-final clocked 67.3 million television viewers with television ratings points (TRPs) of 11.74, which peaked to 20.02 towards the end, the highest for any match in India so far

It’s reported that over 1 billion viewers tuned into the game across the world. 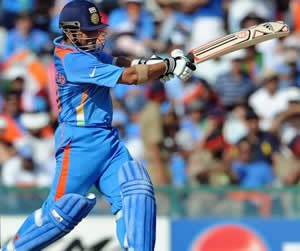 Another interesting twist on the day of the semi final was that the India’s fast-food market sharply increased with home deliveries up nearly 50%. Fast-food chains Domino’s, Pizza Hut and McDonald’s saw a rush of bulk orders as cricket fans glued to TV sets at home and in offices to watch their team make it to the final. “For every day on which India has played in the World Cup, we saw a 50% spike in pizza deliveries. On some days it has almost been double the average,” said Ashok Bajpai, of Pizza Hut.

Bollywood also came to a halt during the game with very little shooting going on as stars also joined in the excitement and thrill of the clash. Shahrukh Khan watched the semifinal with friends Farhan Akhtar, Karan Johar, Hrithik and Suzzanne Roshan at his home ‘Mannat.’ After the win SRK said: “We will win the final also. Inshallah! The kids want to go and see. So I have to go there and watch the finals.” Aamir and SRK are two big names from Bollywood who have already booked tickets to watch the final. 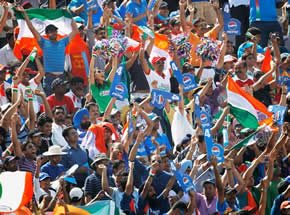 With all eyes set on the final at the Wankhede Stadium in Mumbai, everyone is getting ready to see India hopefully lift the cup. However, Sri Lanka will not be giving the chance of the trophy away easily with super bowler Muttiah Muralitharan fully fit to play against the little master, Sachin Tendulkar. This will be Murali’s final game in international cricket and India’s Tendulkar is aiming to complete his 100th hundred of his 21-year international career.

Predicting the match result, Bollywood star, Abhishek Bachchan said: “This is my prediction that Sachin will come to his home turf and take the Cup.”

There is no doubt that the final will be bringing India to a halt. For those not getting a ticket to watch it live, the multiplexes of India will certainly be busy and more expensive that the semi-final. It’s anticipated the final against Sri Lanka looks set to be an even bigger blockbuster. At the Cinemax chain of multiplexes, ticket prices have shot up 66% from Rs150 for the semi-final to Rs250 for the final. A seat in the premium Red Lounge, where food and wine will also be served, will cost Rs1,500 each, which previously cost Rs900.

With Bollywood taking a back seat during the final, the CEO of Cinemax, Sunil Punjabi said: “We have already booked most of the 35 screens across the country where we will screen the final match. We are maintaining the required balance between the movies, which are our regular fare, and the India-Sri Lanka World Cup final.”

After a triumphant win against Pakistan, India’s aim will be to win the final. And for the nine hours or so of riveting cricket between to well known rivals, the ICC World Cup final will decide which nation is the worthy winner of the cup. Will India make history by winning it on home turf, or will Sri Lanka take away the coveted prize to Lankan soil? The result will be revealed very soon.

Baldev enjoys sports, reading and meeting people of interest. In between his social life he loves to write. He quotes Groucho Marx - "The two most engaging powers of an author are to make new things familiar, and familiar things new."
British Asian Sports Awards 2011
India win ICC World Cup 2011