A German wife decided to travel to India so that she could take part in a traditional wedding ceremony with her Indian husband.

he went to Mauritius on holiday where he met Alanna.

In what was a case of long-distance love, a German wife had a traditional wedding ceremony with her Indian husband.

However, the couple was already married. Eight years after having a court marriage, the woman wanted a traditional ceremony after getting to know about the traditions.

Nitin had first met German national Alanna whilst on a trip to Mauritius in 2012. After falling in love, they had a court marriage in Ahmedabad.

When Alanna came to know about Indian marriage traditions, she expressed her desire to have a traditional ceremony.

After hearing of her request, the couple had a traditional wedding on January 22, 2020.

Nitin used to work as a professor at Bahauddin Science College in Junagadh, Gujarat.

His family said that he got married in 1990 but later divorced.

It was revealed that Nitin has ties to Germany prior to his marriage with Alanna. He lived in Heiligenberg where he also worked.

In early 2012, he went to Mauritius on holiday where he met Alanna. The two instantly had a liking for one another and eventually got into a relationship.

Nitin soon proposed and Alanna accepted. The couple went to Ahmedabad and had a court marriage.

Alanna soon began expressing her desire to marry in a traditional ceremony after becoming fascinated with the cultural practises.

Nitin accepted her request and the German wife made her way to India. On January 22, they were wed in front of their relatives. 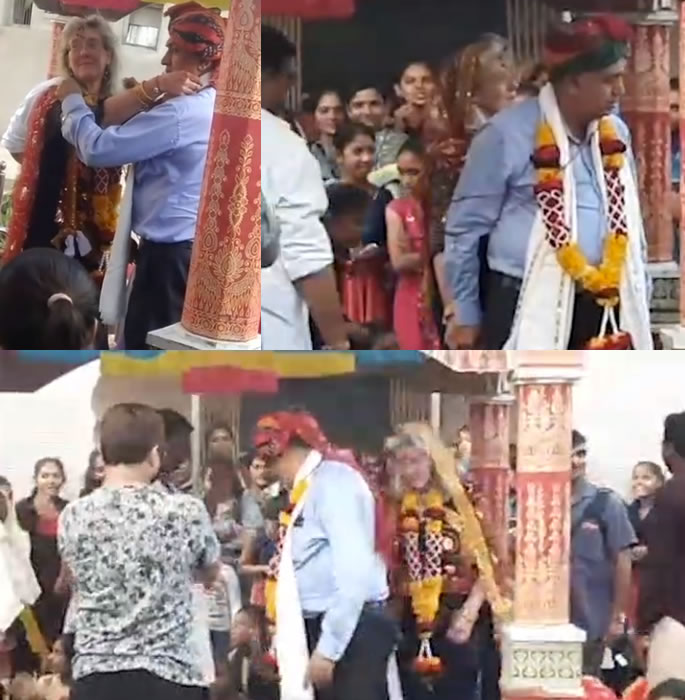 This included Nitin’s 98-year-old father Umesh who, among many, blessed the bride and groom.

Nitin had decided that the wedding would take place in the village where his father got married. Locals helped decorate it in preparation for the wedding.

When Alanna saw the village for the first time, she was overwhelmed with the decorations as well as the wedding traditions they follow.

During the wedding, Alanna was overcome with emotion when she saw the guests giving their blessings.

Cases of Indians getting married to people from overseas are quite common. In many cases, it is a traditional ceremony.

They were married a year and a half after getting to know each other on Facebook.

Sushil had come across Celina’s Facebook profile and decided to send her a friend request. She accepted and the two regularly chatted to one another.

Their friendship gradually turned into a long-distance relationship.

On her relationship with Sushil, Celina explained that she has always admired Indian culture.

Celina chose to have an Indian wedding ceremony as she wanted to experience the process. She said that wedding rituals in America are completely different in India.

She admitted that she has always been impressed with India’s customs that they follow.

Dhiren is a journalism graduate with a passion for gaming, watching films and sports. He also enjoys cooking from time to time. His motto is to “Live life one day at a time.”
Indian Sisters arrive at Wedding On Horses with Swords
UK Pakistani Couple convicted of Niece’s Forced Marriage