India won Sri Lanka emphatically to lift the 2011 ICC Workd Cup Cricket trophy. With strength in fielding, bowling and batting the team triumphed to make history once again after 28 years. Sri Lanka put up the fight but could not stop India claiming victory at the final.

"Congrats India, you were the better side today"

India won the ICC World Cricket Cup against Sri Lanka on 2nd April 2011 after 28 years. MS Dhoni finished the game in style with a huge hit at the end scoring a six. Celebrations with fireworks filled the Wankhede Stadium in Mumbai as the players walked around the ground in complete jubilation. India beat Sri Lanka by six wickets as the game came to a tense finish in the last 30 minutes.

Dhoni and Yuvraj took India to the country’s second World Cup championship since 1983 with 10 balls remaining to complete the historic victory. Despite last efforts by Malinga of Sri Lanka to bowl tactically, he still could not beat the replies by Yuvraj and Dhoni. 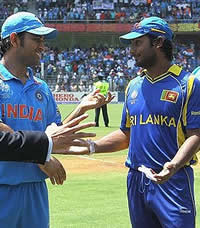 New Zealand match referee Jeff Crowe found himself involved in controversy as confusion arose at the toss between India and Sri Lanka. After India’s captain Dhoni spun the coin, he thought he had won the toss. However, Crowe did not hear a call from Sri Lanka captain Kumar Sangakkara who, as the visiting skipper was supposed to nominate ‘heads’ or ‘tails’ while the coin was in the air. Then after a short discussion with the two captains, Crowe ordered a re-toss. An event unheard of in any cricket match and certainly not one of this importance.

Sri Lanka opted to bat after the toss and achieved 274/6 in 50 Overs. Their start was kept under tight fielding control by the Indians and exemplary bowling by Zaheer Khan, who bowled a tight first over, with just two byes coming off it. The weakest bowler for India was S Sreesanth, who leaked runs. In the 12th over, Sangakkara played a beautiful shots and began to make a Lanka recovery slowly.

It was the 17th over when Harbhajan Singh tossed up the ball and bounced it around Dilshan’s legs which resulted in his exit from the field and Sri Lanka at 60/2 in 16.3 overs. Mahela Jaywardene joined Sangakkara and began a solid partnership helping to change the game for Sri Lanka after the early setbacks.

Yuvraj Singh had a fantastic game looking sharp throughout the match. His fielding and bowling were of a great standard. He bowled a short and wide ball to Sangakkara who edged it into the gloves of Dhoni. Sri Lanka slipped to 122/3 in 27.5 overs. Subsequently, Samaraweera who replaced him was out for a LBW. Then Zaheer got Kapugedara caught at short cover for one run.

Nuwan Kulasekara joined Jaywardene as the new batsman and they both got the Lankans over the 200 mark. Jaywardene scored a superb century and set India a target of 275 runs to win the final. 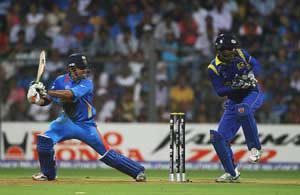 The Indian innings were not off to a great start when they lost the wickets of Sehwag, who was out for a duck, and Tendulkar who only managed 18 runs. However, Gautam Gambhir steadied the game with Kohli and took it forward with Dhoni joining him after Kholi’s dismissal. Then, Gambhir was out for a healthy 97 runs stabilising the score for India. Subsequently, Yuvraj who scored 21 and Dhoni getting a great 91 runs gave India the result so badly desired to lift the world cup trophy. India finished on a total of 277/4 in 48.2 overs.

At the post-match presentation Dhoni knows that he came under some criticism for the way he chose the players and ranked himself up higher for the game but defended his decisions and said:

Sri Lankan captain Kumar Sangakkara conceded that the Indians were the worthy winners of the trophy and said, “When you look at this Indian team anything less than 350 looks less. They deserved this title, the way they played in front of a great crowd. Both Sri Lanka and India will be proud with the way they have played. Congrats India, you were the better side today.” 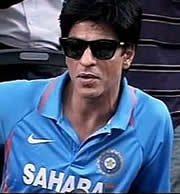 India as a country was glued to the game throughout with everything taking a back seat. The stadium was packed with a full force of Indian fans with a minority of Sri Lankan fans. Painted faces, flags, atmospheric chants, loud drums and Mexican waves were all part of the exhilarating atmosphere inside the stadium. Whilst millions watched the match on television.

The match was enjoyed by many officials, business people and dignitaries. Including some of the biggest names in Bollywood who are staunch fans of India and cricket. Including Shahrukh Khan, Aamir Khan, Ranbir Kapoor, Soha Ali Khan, Sunil Shetty, Amisha Patel amongst many others.

The 43-day event reached its finale as these two Asian giants fought the battle to achieve the ultimate glory, and yes, it was a cracker of a game with a buzzing atmosphere, proving that the home of cricket is definitely South Asia, where the game can bring a country like India to a stand still.

Baldev enjoys sports, reading and meeting people of interest. In between his social life he loves to write. He quotes Groucho Marx - "The two most engaging powers of an author are to make new things familiar, and familiar things new."
India win Pakistan to 2011 ICC final
India Cricket win fever hit the UK