India won the ICC World Cup in cricket after 28 years, and the noise and buzz of the win resulted in many amazing and colourful celebrations in the main cities of the UK. We look at how the win was celebrated by UK Indian fans.

cricket binds Indian fans from around the globe

Cricket fans joined the celebrations in the UK as India won ICC World Cup 2011 on Saturday 2nd April. Fans went “crazy” out of joy and excitement. This was a day simply devoted to patriotism. Indian flags flying high. Faces painted in colours of the India flag. Street parties in the main cities with “Chak De India” as the common sound being heard from car steroes, amongst the crowds.

Cricket is a national game of India and it has been a unifying part of life that binds the people of India together. However, more fascinatingly, cricket binds Indian fans from around the globe in countries wherever there is an immigrant population of Indians.

Fans in the UK watched in bars, restaurants, special venues with big screens, at home, on the Internet and even their mobile phones to watch India play a strong and strategic game to win the final of the ICC tournament. 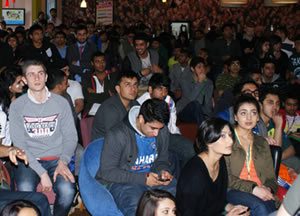 Police for the day, forgot that they were on duty and joined in the celebrations in a lot of the cities. Roadblocks were implemented by the police in most of the areas to let fans enjoy the moment of victory.

Street parties were held at almost every main road of cities and towns from the point of the win and went on into the late evening. Celebrations took place on Soho Road in Handsworth (Birmingham), broadway in Southall, Belgrave Road in Leicester and other popular places like Wembley, Kingsbury, Trafalgar Square and Green Street.

Most of the parties were packed with cheering fans. Indian sweets were being given out on Soho Road in Birmingham with people dancing along this popular stretch and peeping their car horns. Belgrave Road in Leicester was packed with crowds stopping traffic with Bhangra dancers. 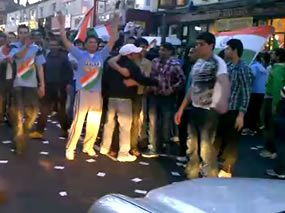 Bhangra dancers filled the streets of Southall. Wembley crowds were over populated, to the extent that it pushed people to dance on top the cars. Kingsbury may have had less crowds but fans were dancing the night away with their India flags. Flags, fireworks and victory chants filled the air as people poured from the restaurants and bars in Queensbury.

We have put together a special video showing you some of the fantastic and incredible celebrations of the India win in the UK; from Southall to Birmingham and from Leicester to Queensbury, you have to watch to believe the support for India’s team :

In central London, most of the fans hit Trafalgar Square, being the centre of London. Fans were dressed in Indian team shirts, dancing with their cricket bats. They sang songs of about favourite cricket players. Police were really relaxed and not a single outbreak of a riot. The crowds on Green Street were slightly easier to control by the police. The craze kept people buzzing the night away. 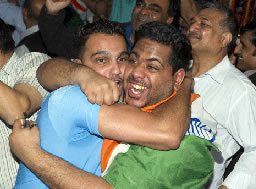 India still stands strong after many years of playing in the cricket matches. India’s win was well received here in England amongst all NRI’s (Non-Resident Indians). What if England had won the World Cup in India? We wonder if the celebrations would have been similar? The patriotism for people’s origin and homelands is still a major aspect of life for Asian people in the UK. There is a natural allegiance to a homeland amongst all South Asian communities in the UK with India being a prime example. Therefore, the celebration of a similar win by England would perhaps not see the minorities lacing the streets doing Bhangra and giving out Desi sweets.

Majority of the media covered the Cricket World Cup 2011 in the UK. Sky broadcasted the match live. BBC Sport had a live coverage online. Papers reported on the game in depth. The Shropshire Star covered India’s victory. They interviewed the chairman of the West London Branch of the United Kingdom Anglo- Indian Association. Here’s what he had to say:

“I am sure the community will be very happy about India winning the World Cup, it’s a tremendous achievement.” 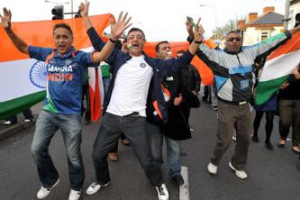 However, the celebrations of Indian fans were not welcomed by all.

A non-Asian reader of the Harrow Times reacted to the party in Quensbury and said: ” I live close to Queensbury circle in Kenton and I could hear the drums and car horns. I doubt the police even arrested anyone. But if England football fans done it, the newspapers would not have written this in such a positive way. I am born and raised in Harrow and am happy with its multicultural ways. But the patience of the community is pushed to its limits on days like today.”

The first game of cricket played by India was in the mid 18th Century, 3rd March 1845. Since then, the team has been developing it’s techniques and improving as a team to reap its success. The ICC World Cup is a fantastic tournament giving countries a chance to display their best 20/20 cricket. This year, India showed that it had the skill, determination and flare to life the trophy and win for the second time – a long worth wait after 28 years.

Smriti is a qualified Journalist with an optimistic take on life, enjoying sports and reading in her spare time. She has a passion for arts, culture, bollywood movies and dancing - where she uses her artistic flair. Her moto is "variety is spice of life."
India win ICC World Cup 2011
IPL 2011 Cricket Schedule