Katrina Kaif and Salman Khan have been spotted playing cricket on the sets of their upcoming film Bharat. Katrina even had a request for Anushka Sharma.

"Anushka Sharma perhaps u could put in a small word for me."

Both Katrina Kaif and Salman Khan are busy filming for their upcoming film Bharat, but they managed to find a way to entertain themselves whilst on the sets.

They have been spotted on the sets playing cricket and both are very confident in their abilities, especially Katrina who was grabbing a lot of attention as she aimed for sixes each time.

It seems the Cricket World Cup has got Katrina in the mood for the sport as it draws nearer and India are busy preparing for the tournament, which gets underway in May 2019.

The actress took to Instagram to showcase her batting skills and even made a witty request to Anushka Sharma, who co-starred with her in Zero.

She wrote: “Pack up ke baad Bharat sets as the World Cup nears. Anushka Sharma, perhaps u could put in a small word for me with the captain of the team. Some room for improvement in my swing, but overall not a bad all-rounder.”

Katrina’s witty request to Indian cricket captain and Anushka’s husband Virat Kohli is one which he could consider, especially as she goes for boundaries to the soundtrack of Apna Time Aayega from Ranveer Singh’s Gully Boy.

While Anushka has not responded to the request, actress Preity Zinta is keen for Katrina to be a part of her team.

Katrina responded: “Do it, come on let me play.”

Katrina’s co-star Salman Khan, who plays the titular character, also enjoyed a spot of cricket on the sets. He too uploaded a video of himself batting on his Instagram page.

Salman also included the hashtag ‘On location stories’. These moments of the two actors playing cricket will certainly be a memorable moment for them during the filming of their new movie.

Both actors hitting one smash after another will certainly get cricket fans pumped up for the World Cup in May 2019.

Katrina shared an image of a food break from the set of Bharat on Instagram. 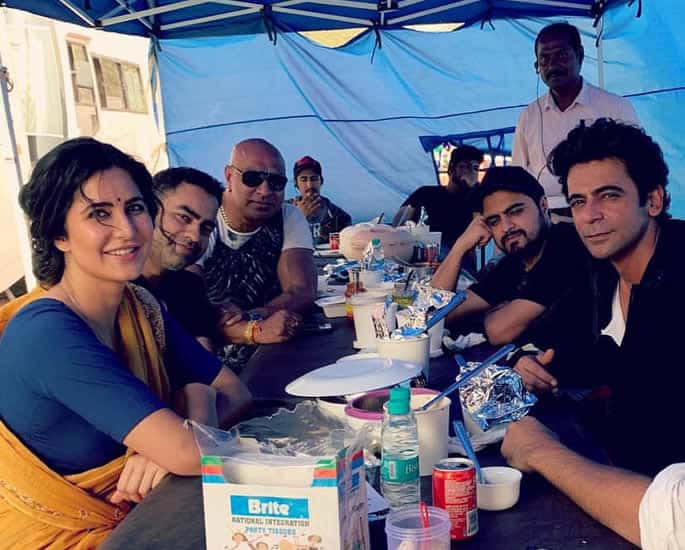 Bharat is a drama and is an official adaptation of 2014 Korean film Ode to my Father.

The film is directed by Ali Abbas Zafar and sees Salman and Katrina portraying lead roles of Bharat and Aaliyah respectively.

Dhiren is a journalism graduate with a passion for gaming, watching films and sports. He also enjoys cooking from time to time. His motto is to “Live life one day at a time.”
Sunny Leone accused of Not Returning Rs. 5 Lakh to Producer
Kangana Ranaut shines with Manikarnika: The Queen of Jhansi