The UK Asian Music Awards (UKAMA’s) are in their fourth year and voting is now open for you to choose your favourite act for the 2011 awards ceremony. Find out how you can vote and more about this year’s show.

The winners will be announced on 10th March 2011 at a glitzy glam ceremony which will be held at The Roundhouse in Camden, London. After three years at the Royal Festival Hall the show has been moved to this well known music venue which has hosted gigs from the likes of big pop stars Jay Z, Elton John, The Rolling Stones and Jimi Hendrix.

To nominate who you feel is your favourite band or artist for the categories, simply fill an online form here at the official site (the link will open in a new window): UK Asian Music Awards Nomination Vote.

“We’re proud to be continuing our commitment to nurturing new talent and have exciting plans to ensure we give these role models an opportunity to shine.” 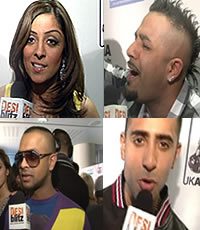 Abs Shaid, CEO and founder of the UK AMA’s said: “We have a lot of plans for 2011, and these four major announcements are just the start of the new look for 2011. We’ll make sure that everyone is kept up to speed with news as it happens, but this first stage is all about opening the Lebara Mobile UK Asian Music Awards up to the public and getting them to tell us who they actually think deserves to be nominated. Without their input we have no awards – it’s ‘artists’ fans that create the stars, so we really need to know who they want to put forward! All they need to do is log on to the website and add their recommendations against each category.”

The awards ceremony on March 10th at The Roundhouse, will be hosted by BBC Radio 1 and BBC Asian Network presenter, Nihal and sultry singer and actress Karen David.

Nihal said: “It’s exciting to be a part of this event. I’ve watched the awards grow over the years. This is just the start of what’s to come… bring on March 2011!” Karen said, looking forward to the event: “It’s going to be a great night, with great performances and some well deserving winners!”

This event is an important one for the British Asian music scene because it gives artists and acts the chance to celebrate their hard work and appreciation from their fans. Let’s see who you vote for and feel worthy of winning an award for their singing talent and musicianship.

Jas likes to keep in touch with the world of music and entertainment by writing about it. He does like hitting the gym too. His motto is 'The difference between the impossible and the possible lies in a person's determination.'
Kuldeep Manak the Legendary Punjabi Singer
Rahman nominee for music BAFTA