AR Rahman dubbed as the ‘Mozart of Madras’ is no stranger to awards after his huge success with Slumdog Millionaire. This time, he is nominated for a BAFTA for his music in ‘127 Hours’ as film by Danny Boyle.

"To collaborate with Danny Boyle is a joy in itself"

Music maestro A R Rahman is a nominee for a British Academy of Film and Television Arts (BAFTA) award for his music in Danny Boyle’s latest film 127 Hours starring James Franco. He was nominated for the category of Best Original Music.

Rahman was excited about the release of 127 Hours in the UK. On 5th January 2011 on Twitter he said: “I’m very excited about 127 hours releasing in the UK today and what makes it even more special is that we scored the music here..in London.” Revealing that the music for the film was composed and created the music in the UK.

Speaking about his opportunity to work with Danny Boyle once again after Slumdog Millionaire and getting nominated, Rahman said on Twitter: “To collaborate with Danny Boyle is a joy in itself, and to receive recognition for the score makes it all the more joyous. This is a blessing beyond words.” 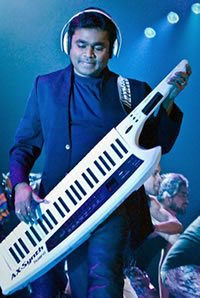 His music for 127 Hours has received good reviews. The story is about Franco playing a real-life mountain climber Aron Ralston, who cut off his arm to escape from beneath a boulder after being trapped for more than five days. The music for the film is recognised for it”s ‘haunting tracks’ and ‘wonderful crescendos.’

The 45-year-old composer known as the ‘Mozart of Madras’ first won a BAFTA award for his music in Boyle”s Slumdog Millionaire but this time round he is facing stiff competition from Hans Zimmer (Inception) and Alexandre Desplat (The King”sSpeech), Danny Elfman (Alice in Wonderland) and John Powell (How to Train Your Dragon).

The film, was also nominated in six other categories including Best Actor for James Franco, Best Director for Danny Boyle and Outstanding British Film.

However, he feels very humlbe to be nominated for any award because it’s an indication of praise from his audiences for his work. He says of the 127 Hours nomination:

“Getting a nomination in itself is a great thing among all the extraordinary talent.”

He added: “It’s got great reviews and people are loving the movie. I think it’s been a good ride so far.”

Rahman, is also on the Oscars Academy shortlist again in the Best Song category for ”If IRise”, his collaboration with British singer Dido. This track won the Best Song award at the 16th Annual BFCA Critics’ Choice Movie Awards. These awards poll 200 film critics from the Broadcast Film Critics Association, the largest film critics organisation in the U.S. and Canada.

Rahman was missed out on a Golden Globe trophy for his work in 127 Hours which was won by Social Network. After winning so many awards with Slumdog Millionaire this time round the team which includes Danny Boyle and Rahman seem to not getting the same number in awards. Reacting to the loss he said: “It’s so strange that when you get great success, the second movie gets really ripped off. It’s been a great suffering for the whole team,” he told IANS.

It seems that Rahman is focusing on a lot of Hollywood projects and has reduced his commitments to Bollywood scores unless he is certain or close to the producers of a film. There are reports he has turned down work in India to devote time to international opportunities. He tweeted regarding a project with Dreamworks: “Excited about entering the world of Dreamworks animation…!”

When asked about winning more Oscars, Rahman said: ‘I’ll be happy if I get nominations but I’ve got enough Oscars already for one lifetime. I don’t think I’ll get an Oscar. I’ll enjoy the function and see it, but I don’t think I’ll be getting it.”

Rahman is one of the elite musicians that has crossed over successfully the divide between Hollywood and Bollywood, and is being continuously recognised for his tremendous contribution to both film industries.

Jas likes to keep in touch with the world of music and entertainment by writing about it. He does like hitting the gym too. His motto is 'The difference between the impossible and the possible lies in a person's determination.'
Vote for UK Asian Music Awards 2011
2011 UK Asian Music Awards Nominees