Roopkumar Rathod and Sunali Rathod are a couple whose talent has delivered them tremendous fame in the world of Bollywood music. Roopkumar Rathod is known for singing hits such as Maula Mere Maula and Tuj Mein Rab Dikhta Hai. DESIblitz met up with the duo to find out more.

Roopkumar Rathod and Sunali Rathod are two melodious and vocally gifted artists who are renowned for their Bollywood playback singing.

Roopkumar Rathod is a name many people associate with Bollywood hits songs. Especially songs like Tere Liye from Veer Zara, Maula Mere Maula from Anwar and Tuj Mein Rab Dikhta Hai from Rab Ne Bana Di Jodi, starring Shahrukh Khan. This versatile singer actually has a plethora of talent and has a wide repertoire of music including Ghazals, Bhajans, Sufi, Light Classical music, as well as his playback singing achievements.

Roopkumar’s voice can be best described as a touch of velvet which elevates to melodious mesmerisation and takes you into a dream-like state. His voice captures the emotion of each song that he has sung, especially for Bollywood. 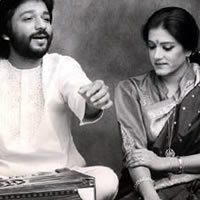 His other half, Sunali Rathod joined his life after her divorce from Ghazal singer Anup Jalota, with whom she had a love marriage. Roopkumar was Anup Jalota’s tabla player and musical friend, however, the musical relationship changed after the divorce, and Roopkumar pursued his musical career with Sunali by his side as his wife, forming an exceptional musical duo.

Roopkumar is the lead person in the musical relationship as the teacher and composer. Sunali has learnt a lot from him and enjoyed singing with him and solo. They compliment each other on stage and provide a unique experience of live melodious entertainment with a delightful mix of Bollywood and Classical music tracks.

As a versatile performer, Roopkumar is often called the ‘chaumukha’ musician where he boasts tremendous competencies in singing, percussion and composing. His first love was playing tabla and his first concert on stage was at the tender age of six years old, despite his hereditary instincts of becoming a singer because his father was a Classical Indian singer. Roop says: 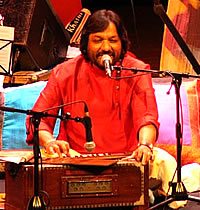 Roopkumar’s entry into Ghazals began in the early eighties, when the record label Music India released a double album of Ghazals called Parwaaz. The music for the album was composed by him as well as the singing and interestingly, he played the tabla on the album too. Showing off all of his talents on his debut album.

Subsequently, Roopkumar released several solo albums and duets with his wife Sunali and many other artists, such as Ustad Amjad Ali Khan and Gulzar Saheb with whom he made the Ghazal album called Vaada; Pandit Shivkumar Sharma renowned santoor player produced the album Nazm which included a duet with Lata Mangeshkar and Roopkumar, and a collaboration on a jazz album with percussionist, Trilok Gurtu. His love for poetry and Ghazals led him to sing verses of poets from Ghalib to Gulzar and saints from Meerabai to Sant Tukaram.

DESIblitz met up with both artists while they were visiting the UK and you can watch our exclusive SpotLight interview with the duo. 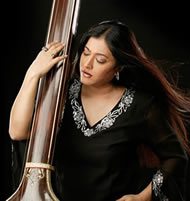 Sunali Rathod began to sing at a young age too, from the age of seven to eight years she developed an interest in singing. She had formal training in Indian Classical music at the age of 12 from Pandit Ridnath Mangeshkar (brother of Lata Mangeshkar). It was her solo Ghazal album called Aghaaz which catapulted her to fame. She has a love for all kinds of music. She says: “Every kind of music inspires me. Good music inspires me whether it’s Jazz, Pop or Classical. I listen to all kinds of songs and music from all over the world. And the tunes I like I try to learn something from them.”

The couple are dedicated to their craft and rehearse (riyaz) every day. Regular riyaz is included in their daily schedule as individuals and together too. Roopkumar’s favourite raag is ‘Bhervi’ which he adores. Performing around the world is part of their life and the UK, USA and Europe are all destinations for compelling and musically rich concerts.

Sunali and Roopkumar have recorded many albums together including, Ishara, Khushboo, Mitwaa, Mohabbat Ho Gaya, Sunn Zara, Bazm-e-Meer and Velvet Voices. They’re most favourite ghazal is the one they both recorded called ‘Woh Meri Mohabbat Ka Guzara Zamana.”

Since Roopkumar is the composer of tracks, he usually decides on their songs for their albums but Sunali does not always agree with his choice, so they do have many fall outs over choice of song! Sunali has learnt a tremendous amount from Roopkumar but it wasn’t easy because she revealed to us: “He is strict, a very strict teacher!” 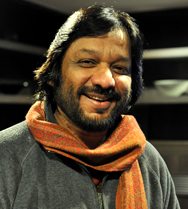 When asked about Maula Mere Maula possibly one of Roopkumar’s biggest ever hit songs from the Bollywood film ‘Anwar’, he revealed of his surprise when he found out it was a hit: “When you sing a song you don’t know it’s going to be a huge hit. This was not a mainstream film. If you have Shahrukh or Salman you know it is going be a hit because they have a fan following. It was the Mithun, the music directors first film too. We were performing in America when we were told that this song has become a hit all over the world!”

Food is a key interest for both of them and they are known to be connoisseurs of food. And interestingly Sunali has a favourite food: “I like Pizza. Vegetarian Pizza with lots of sun-dried tomatoes.” 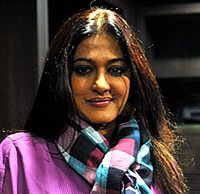 Sunali’s other interests include astrology and numerology and Roopkumar is an avid photographer and photography forms an exciting part of his travelogue.

Between them they have a daughter called, Surshree. She too has pursued music as her career. She is a pianist, singer and a composer. She performed at the Tejpal Hall when she was just four years old by singing ‘Payogi Maine Ram Ratan Dhan Payo,’ the same place where Roopkumar wowed audiences with his first performance. Sunali says about Surshree: “It’s her own choice. I feel music is something you are born with. She is passionate about music and we are very grateful for that.”

Meeting both these delightful artists was a pleasure, and their calm and relaxed style portrayed two individuals who have many deep connections together but most of all was their connection and love for music, which was exuberant throughout our interview with them. We wish Roopkumar and Sunali Rathod all the best and hope we will hear more enthralling music and captivating hit songs from them in the future.

Nisha has an intense passion for reading books, tasty cuisine and enjoys keeping fit, action films and cultural activities. Her motto is 'Don't put off until tomorrow what you can do today.'
2011 UK Asian Music Awards Winners
Kamal Raja single NO CLUE