Rahat fined for not Declaring Cash

Rahat Fateh Ali Khan, one of the most popular Sufi artists and Bollywood singer has been detained, charged and subsequently fined, for failing to declare over $100,000 cash found in baggage at Delhi Airport in India.

"Pakistani singers prefer in cash rather then cheque"

Bollywood singer Rahat Fateh Ali Khan has been fined Rs 15 lakh for being caught with undeclared cash at Indira Gandhi International Airport on 13th February 2011. He and his manager, Marroof and another trope member were carrying cash in luggage worth US $1,24,000 (Rs 55 lakh) and two bankers drafts while trying to board a flight from Delhi to Lahore via Dubai.

The by Directorate of Revenue Intelligence (DRI) arrested the men after finding the cash in their luggage. Rahat had $24,000 in his hand baggage and the remaining $50,000 each were found from the baggage of two troupe members, one of which was Marroof, and an additional two bankers drafts for the value of $10,000 and $8,646 were also found. 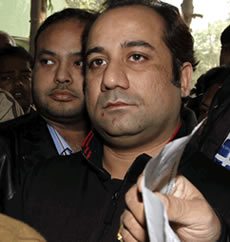 The maximum permissible amount in India which a traveller can carry abroad is $5,000 in cash and $5000 in forms like traveller’s cheques. This amounts to around Rs 4.5 lakh. Therefore, not declaring any excess amount more than the allowed limits is an offence under Indian law.

The DRI carried out an investigation into the money hiding affair and charged Rahat and Maroof with the significant fine under the FEMA (Foreign Exchange Management Act) and Customs Act. Rahat was questions for three days by the DRI during this investigation and the report has been forwarded to the Customs Department at Delhi Airport. The conclusion was that Rahat and his troupe would be free to return to Pakistan further to being charged with a fine.

“The entire money found on the passengers has been confiscated. A fine of Rs 15 lakh each has been imposed on Rahat and Marroof.”

A senior official said: “The total amount confiscated from the two is Rs 69.88 lakh.” He added: “They will be allowed to leave the country once the fine amount is paid.”

However, the question of where the money came from is still being investigated by the DRI. It’s reported that Chitresh Srivastava, brother of Aadesh Srivastava who is a Bollywood a singer/music composer, is detained for questioning further to having his offices raided where $200,000 was seized. He’s the event and business manager for Rahat’s shows in India. And also two money exchangers from Cosmos Forex from Mumbai have also been detained further to raids. Because it’s alleged that they exchanged foreign money for Rahat, subsequent to confessions by the singer. Its reported that criminal charges will be brought against these individuals. 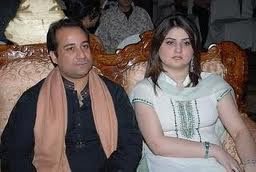 The theory is that the money was paid to Rahat for his shows in cash by the events company and Khan was oblivious to Indian laws related to travelling with money. But Rahat did not declare the money at customs which he should have done and this is where the theory seems to break down. Investigators have indicated though that Rahat may not be completely at fault and suspect his managers are in control of financial matters.

Commenting on the issue, Bollywood composer Pritam Chakraborty said: “Pakistani singers prefer in cash rather then cheque as per India’s singers.” He also added Rahat Fateh Ali Khan is a nice and simple and not the kind of person that would go out of his way to break the law.

There are reports that the Pakistani government has also played a strong role in Rahat’s release with input from his wife, Nida Rahat making calls to officials. She spoke in a phone interview on Star TV saying, “I only found out via news channels that he’s been accused of having such money and I am not sure if it is true or not. I cannot say much more on this but state that Rahat Fateh Ali Khan is a big name and he is not the kind person to commit such a crime.” 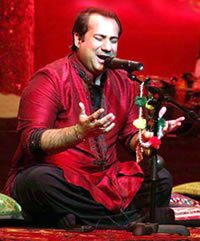 There is huge noise about the arrest and also many theories being banded by Pakistani and Indian media. Many Pakistanis believe that Khan has been trapped by a certain lobby in India that stems from professional jealousy because the singer has been doing so well in Bollywood, especially further to the recent awards he won at the Filmfare Awards. However, the Indian media seem adamant that there is more to the case.

Some Bollywood music composers have reacted to the news. Two that were to record with Rahat in the next six months have made their allegiance clear. One not happy about the issue said: “I’m planning to record my song in Daler Mehndi’s voice.” The other composer argues that the singer’s voice is “irreplaceable” and said “Rahat is not an offender by law in India. I’ll certainly continue to record with him.”

There is no doubt that Rahat Fateh Ali Khan will have to work very hard to rectify his tarnished image further to these events and charges. It remains to be seen how easily it will be for him to be accepted again as a reputable singer by fans, music composers and film directors. What has taken him a career’s worth of time to build has been swept away with this tide of revelations of corruption and deception within a few days.